New Greenway Will Surface St. Louis History Instead of Paving over It – Next City

New Greenway Will Surface St. Louis History Instead of Paving over It 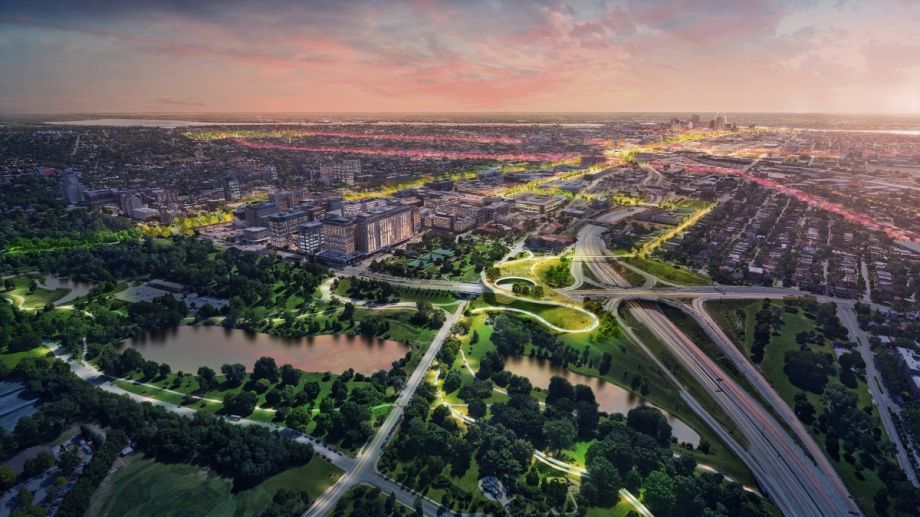 De Nichols, an artist, activist, and social impact design strategist for the firm Civic Creatives, had hesitations before adding another role to her resume last year. Nichols was being recruited by several design and urban planning firms forming teams to submit proposals for the Chouteau Greenway, a roughly five-mile connector that will join two major attractions in St. Louis.

In the western part of the city is Forest Park, a 1,371-acre green space and civic center. Starting there, the planned greenway will extend east to the Gateway Arch, St. Louis’ most recognizable public space. Along the way, the Chouteau Greenway would cut through historically segregated neighborhoods of the city — a fact keeping Nichols at bay.

“I used to live on the north side, in the Academy neighborhood,” Nichols says, referring to a majority African-American community undergoing gentrification. “I have heard so many stories of pain, of families moving their cultural legacies because homes have been torn down.”

In projects prior to Chouteau Greenway, she adds, “People of color have been left out of the process, left out of having access to these spaces. It is a harmful cycle that continues to traumatize people who look like me.”

One design team, however, caught her interest. It was led by Boston-based Stoss Landscape Urbanism, recruiting a group that came to include Marlon Blackwell Architects, the artist and architect Amanda Williams, local artist Damon Davis, urban planner Toni Griffin, and others.

“Something about talking to [Stoss] solidified my decision to join,” says Nichols. “They envisioned how I could play a role using design and the arts in public space in order to unearth conversations about hard topics.”

This May, Stoss’ team was selected as the winner of the design competition initiated by Great Rivers Greenway. Great Rivers was formed in 2000, after voters in St. Louis City, St. Louis County and St. Charles County approved the creation of a sales tax to invest in a network of greenways connecting the region. Since then, the organization has identified 45 potential greenways totaling 600 miles, and, alongside partners and community members, is actively working on building out 16, with 121 miles finished to date.

Chouteau Greenway is Great Rivers’ most ambitious initiative yet. “The idea was to do something bold and transformational,” says Susan Trautman, the organization’s CEO. But, she says, “We had to address equity. How do you take a greenway, in the dividing line of segregation, and make it common ground? That was the essence of our vision.”

St. Louis is a divided city, with roads and highways enforcing segregation, further hindered by a lack of public transit. To the south of the so-called “Delmar Divide,” referring to Delmar Boulevard, is the wealthier, mostly white part of the region; to the north is the historically black, economically oppressed part of the region.

The city has used green space to bridge some of those divides. This July, the city will celebrate the completion of renovations at the Gateway Arch Park, long cut-off from downtown by a freeway. The new cap over I-44 is already in place. One priority of the $380 million makeover was creating plentiful pedestrian and bicycle connections into the city; the Chouteau Greenway promises to build off those connections and push them deeper into St. Louis.

For the Chouteau Greenway design competition, Great Rivers Greenway did extensive community outreach to establish design and community goals, which cover everything from safety to economic access.

“We didn’t just want a vision for the Chouteau Greenway,” says Don Stastny, the design competition manager. “We wanted to know how a city could be reborn by putting a backbone through it, something you could attach flesh and muscle to as it develops.”

Stoss’ proposal, dubbed “the Loop and the Stitch,” is a pair of perpendicular loops, running east to west, parallel with the I-64 highway. The “Stitch” then stretches north to south, with trails that reach into neighborhoods traditionally divided from one another. Beyond designing green space, says Chris Reed, founding director of Stoss, the team looked to “use the alignments on city streets or rail rights-of-way to connect resources and people to each other, to provide access and mobility to jobs, and create amazing experiences within the city.”

An art piece along the route will address one of Nichols’ “hard topics”: the displacement of Mill Creek Valley, an African American community eradicated by the construction of I-64 in the 1950s. “This history was eye-opening to all of us,” Nichols says. In response, an installation by Damon Davis will “excavate” the footprints of those lost homes, for passers-by to experience as they walk the greenway.

Reed says the winning proposal was a matter of “developing a roadmap” for the greenway; the team plans to kickoff extensive public engagement to refine their concept.

Nichols believes the stage has been set for great things to happen. One idea, she says, is a block-long dinner party along the greenway, “that can create a visual language between parts of our city that have been divided by so long.”

“We did not apologize for these bold views,” says Nichols. “To see the jury and Great Rivers Greenway also welcoming that boldness, we were blown away. Now, our excitement extends to the fact that, we get to do this now.”