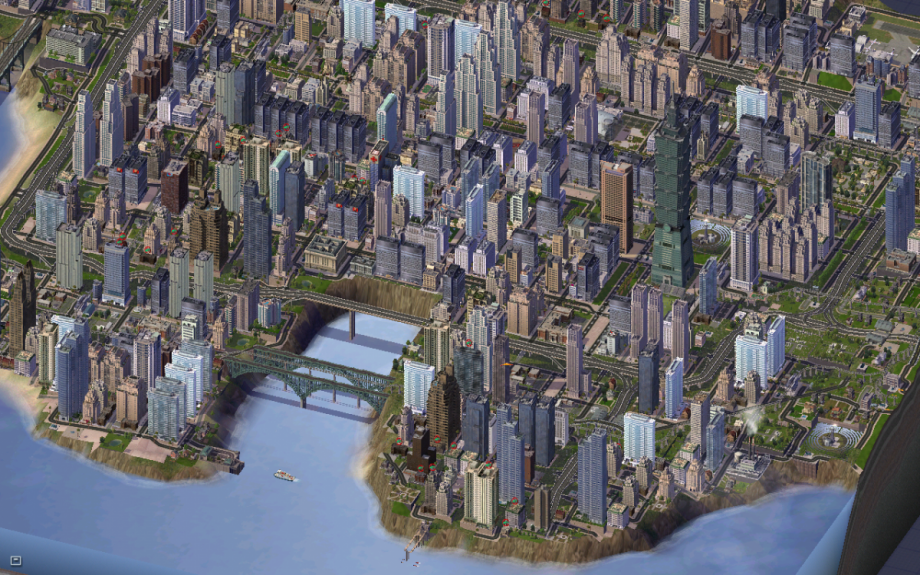 I’ll be the first to admit it. Sometimes when I’m walking the streets of any city, and I take a seat on a park bench to do some quality people watching, and definitely when I’m looking out an airplane window at the cities passing below, the music that still plays in my head is a super-tacky yet somehow brilliantly catchy mid-1990s MIDI composition: the original soundtrack of SimCity 2000.

I thought the soundtrack and the game, released in 1993, could never be topped. Until SimCity 3000. Then SimCity 4. The soundtracks got more memorable, while the game got even more addictive. The game principles hardly bear repeating, but just to be clear: SimCity simulated the residents, workers, children, businesses, factories, farms, government and tourists of a digital municipality, with you as an all-powerful mayor. The game taught me about zoning, infrastructure and planning, and also about the limits of simulated omnipotence. Not every decision led to a thriving, healthy metropolis.

Now, the new Doppelgänger tool from Sidewalk Labs promises to provide real-world planners a simulation based not on some 1990-era coder’s best approximation of people, but instead one based on the terabytes upon terabytes of real-world data available in today’s digital world.

“Doppelgänger enables planners to create a set of virtual households that accurately reflects real neighborhoods, cities, regions, or states, along any dimension relevant to the problem at hand,” writes David Ory, modeling lead at Sidewalk Labs, a Google-connected company launched in 2015. “Doppelgänger can create households that have accurate numbers of children, seniors, teachers, persons with disabilities, electric-vehicle owners, swing-shift workers, and so on.”

Ory is formerly of the Metropolitan Transportation Commission, the transportation planning, financing and coordinating agency for the nine-county San Francisco Bay Area. In his vision, Doppelgänger will be of huge help to transportation planners, helping them identify the winners and losers of decisions like building a new light-rail line or retrofitting an old subway line in need of major renovations.

Equity and transportation were among the issues highlighted by Google when the company announced the Sidewalk Labs venture two years ago. In November 2016, it announced that it would create four themed labs focusing on affordable housing construction, health challenges for low-income residents, fiscal policy and efficiency, and transportation.

Doppelgänger comes out of the transportation-themed lab. It starts with the capacity “to consume all of the data sets created by the Census Bureau (as well as other sources) to create a complete and internally consistent virtual representation of a given community,” according to Ory. Using the math of statistical modeling and the power of modern-day microprocessors, it projects into the future as well.

“Before we can understand how transportation services, policies, or infrastructure impact a community, we must understand who lives in the community today, tomorrow, and 20 years from now,” Ory writes.