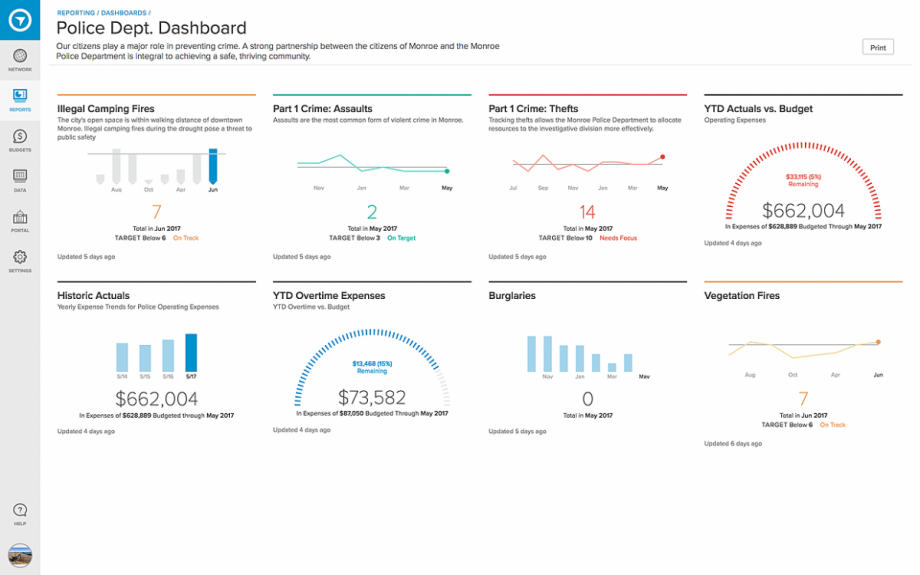 With its budget visualization tools and products that allow would-be voters to read drafts of bills and comment electronically, California-based software company OpenGov has been making a name for itself as the startup equivalent of a CDO. The company’s newest creation, Performance Measures, allows cities to create visuals that track “everything from brush fires to local greenhouse-gas emissions,” Wired reports, and it’s currently being tested by 12 cities.

The new tool builds on the company’s previous work, synching up financial and performance metrics (as well as other data, like 311 request trends) in a series of graphs and charts that are much easier to read than an online PDF. And as Rebecca Woodbury, a senior management analyst with the city of San Rafael, recently pointed out to Wired, it could be especially helpful for smaller cities with limited budgets.

OpenGov has lofty goals. It aims to code “its way to more transparent government,” as Andrew Zaleski wrote for Next City in 2014, and believes technology can be used to lower the barriers of participation between citizens and their elected leaders.

And as Wired points out, the company’s tools could actually start filling a number of necessary federal gaps, especially during the Trump years. From the magazine:

The Performance Measures tool arrives at an inflection point for government transparency. … Since the day he took office, President Trump’s administration has removed critical data on issues like climate change and sexual assault from federal-agency websites. That only heightens the urgency for cities and other local governments to preserve data and share it with an American public that wants to hold elected officials accountable.

As more cities adopt such tools, it’s foreseeable that they could “create an alternative trove of nationwide data that could help shape policy far beyond the local level,” according the magazine. And that vision is in line with where OpenGov says it wants to see its software going.