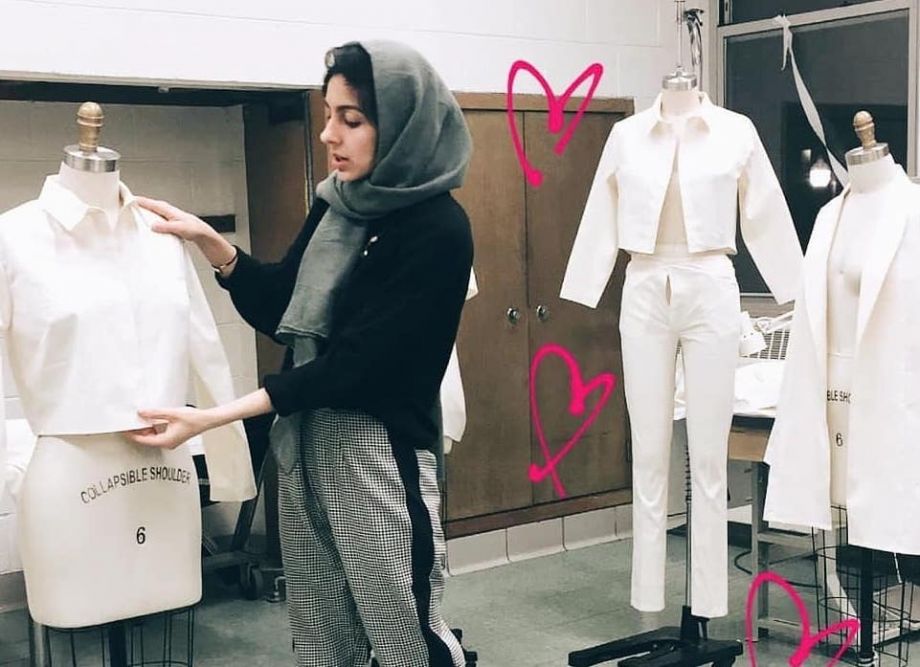 Mercy couldn’t sleep. It was the night before her big sewing test — really more like a first-round audition — to become a founding member of Blue Tin Productions, a worker-owned clothing manufacturing cooperative in Chicago. She was so anxious about being well-rested and on time, she went to bed around 6:30 p.m. — and woke up in a panic at 10:30 p.m., thinking it was morning.

“At like two o’clock [in the morning], I thought, ‘well I’m going to a sewing test, the best way to go is to wear what you make,’” says Mercy, who for safety reasons asked to be identified only by her first name. “So I took some fabric and made a top for myself.”

Mercy first learned how to sew in her aunt’s dressmaking shop, in her birth country of Nigeria, fresh out of high school in 1987. By 1994, she was running her own atelier in Lagos, Nigeria, specializing in custom Nigerian evening wear. Seeking a better, more affordable education for their children, her husband won the visa lottery and moved to Chicago in 1999 and she followed with their four kids in 2003.

But her husband was abusive, and controlling, and she no longer had her family support system around her to keep his worst tendencies in check. He kept her out of the workforce in spite of her skills, and wouldn’t even let her go to the fabric store on her own. Mercy left him in 2017, with the help of a local domestic violence shelter for immigrant women. She still goes there for weekly therapy sessions, and it was her case manager who told her about another immigrant woman who had come by looking for other women who might be interested in starting a clothing manufacturing co-op.

The other immigrant woman was political fashion blogger and community organizer Hoda Katebi, whom Mercy met the morning she arrived for her sewing test — two hours early. Mercy was the first to be tested, and when she came out of the testing room, there were more than a hundred women in the hallway waiting in line.

“If I had come later and seen all these women I don’t know if I could have done it, I would have been too scared,” Mercy says. “Thank God I came early.”

Mercy indeed became one of the first three worker-owners of Blue Tin Productions, along with two other immigrant women, both refugees from Syria with their own years of experience in clothing manufacturing. While technically an “honorary member” of Blue Tin, Katebi and her community organizing skills brought the three together, and her largesse has already helped reel in more clients than they can handle, from a major department store to independent designers looking for ethical manufacturing partners.

The idea for a worker-owned clothing manufacturing co-op goes back to Katebi’s own aspirations to start her own fashion line. A few years ago she started touring garment manufacturers, looking for one that would meet her ethical standards. There were none.

In the U.S. or abroad, there are many words that describe the state of violence against workers in clothing manufacturing — rampant, notorious, tragic, frustrating. Katebi calls it “intuitive” — speed and volume is so necessary, while power dynamics in pretty much every country make it easiest for men to push women to do what they want at the speed they need it to happen, for the least amount of pay possible and in the worst conditions possible.

Frustrated by the lack of options, Katebi did what a community organizer does — she went to the networks where she has trusted relationships and put out an invitation for others to join her — domestic violence shelters, immigrant service providers, refugee resettlement agencies.

Katebi went out to those groups with translators based on the demographics she knew would be present at any given location. On the day of the sewing test, they had ten volunteer translators covering eight different languages. The test occurred on a weekday during standard school hours, when it was most likely kids wouldn’t be an issue — but still they offered childcare onsite just in case. They also had a separate waiting room for any husbands and brothers. A team of volunteer drivers offered rides to/from the test site for anyone who needed it.

“It was a really crazy day,” Katebi says. “We weren’t expecting a hundred people to show up, we were expecting twenty to thirty, and all of our sewing machines broke down except one that morning.”

To help evaluate candidates and whittle down the 100 to the founding trio, Katebi brought in Chicago fashion designers with similar ethical standards and values around the dignity of work.

While all of the women knew how to sew, some had more experience than others, especially when it came to commercial and industrial sewing. One candidate was so experienced and generous, after finishing her test project she was going around helping others. She passed, and is now one of the other founding worker-owners.

“Her clothing factory, husband, and one of her children were lost in a bombing in Aleppo, so she’s here as a widow with four children all under the age of 18 and doesn’t speak English,” Katebi says. “She works part-time at a fast-food chain right now.”

The third founding worker-owner is a Kurdish-Syrian refugee woman who ran a sewing shop with her brother back in Syria.

During Blue Tin’s pilot phase, the three have been meeting twice a week along with Katebi in a former art room donated by the American Islamic College. “It’s on the first floor of a three story building with a lot of windows and wonderful natural light,” Katebi says.

They’ve raised money for equipment and other startup costs (including paying themselves for their twice-weekly meeting time) through a crowdfunding campaign, and Katebi’s outreach has also secured healthcare and dental care services on a donated basis for co-op members, as well as pro-bono legal support from Renee Hatcher — who specializes in cooperatives in her capacity as director of the Community Enterprise & Solidarity Economy Clinic at the John Marshall Law School in Chicago.

Katebi has also been working to secure grants from trusted foundations based in Chicago. City agencies have offered to provide financial support, but Blue Tin has declined those offers. “There’s too much sensitivity around immigrant and refugee work,” Katebi says. “Also I just don’t trust the government, ever, as a Muslim woman of color.”

The past few months have been as much about building strong working relationships and healthy dynamics as a founding group as they have been about setting up bylaws, deciding on wages and benefits, and drafting a business plan. The women plan to begin production around Labor Day.

“Language barriers to have been really interesting,” Katebi says. The two women from Syria don’t currently speak English, and Mercy doesn’t speak Arabic. They speak largely through interpreters during their twice-weekly meetings. The surprising thing has been how easy it is to talk about the actual work.

“Language is not a problem, especially when we’re working, because we all know what to do, once someone points something out, we get it,” Mercy says. “We’re like sisters.”

Many of the decisions they’ve had to make so far have been about which clients to take on. They’re not looking for charity work, Katebi explains. These are women with decades of experience in this industry between them.

“I didn’t want this to be something where people worked with the company because they felt bad for the women, just a cute thing they’re doing because they’re saving the world, but because they need us because we are just bad-ass wildly talented women,” Katebi says.

Chicago-based fashion designer Abigail Glaum-Lathbury, who is also a fashion professor at the Art Institute of Chicago, also joins the Monday meetings to go over designs and sit in on meetings with potential clients, helping the co-op members evaluate designs for production technique and cost. Translating something a designer made themselves into something that can be produced in an industrial setting isn’t easy.

Most importantly, the founding worker-owners have the final say. They’ll only take on clients and projects they collectively decide to take on. For Mercy, it’s been a dream she never knew she had come true.

“A lot of designers are lining up excited to work with us,” she says. “We sit down and look at [their requests] together, and if we want to work with this designer we have to agree. If there’s a boss they would say this is the work you have to do it whether you like it or not. You have no voice. I come from where I don’t have a voice, where somebody has to tell me what to do, where to walk, how to sleep.”

The hardest collective decision so far? What model chair to procure for the manufacturing floor. “It took a while to decide, but finally we got them and it was really comfortable,” Mercy says.

Eventually, they’ll also need to decide on a permanent location for the cooperative, which they expect to have by this time next year. They’re already talking about opening up locations in other cities and other countries within five to ten years.

The language situation could become an asset as they grow the cooperative. Part of their growth plan is to offer classes for women like them to learn how to sew, starting at home for themselves, but hopefully some will progress to their commercial level and want to join the cooperative.

“With the co-op, we’re not only there for ourselves, as we’re working we’re bringing the community along,” Mercy says. “A lot of production houses exploit the workers. If we can enjoy this in Blue Tin, why not expand it. If you’re good at what you do, and somebody is exploiting you that’s not fair. You can be more productive if there’s not somebody telling you to do something whether you like it or not.”