New Camden Blog Will Focus on the Hyper-Local, Down to Block Parties and Dog Poop – Next City

New Camden Blog Will Focus on the Hyper-Local, Down to Block Parties and Dog Poop 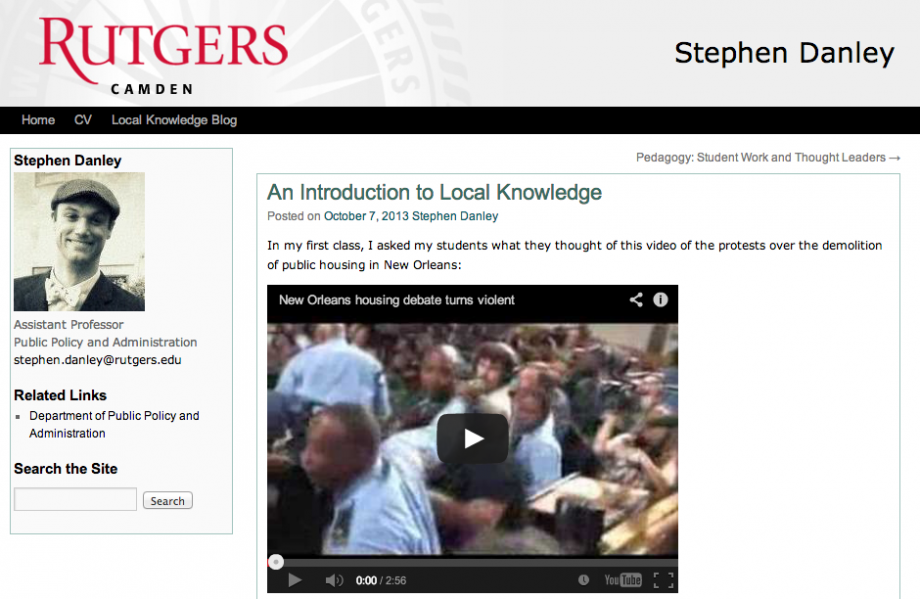 When Stephen Danley submitted a story to Next City about the frustrations he has encountered in his adopted hometown of Camden, N.J., he didn’t anticipate a huge response. The crux of his argument, after all, was that living in the nation’s poorest and most crime-ridden corner often means, for many residents, “to be forgotten in your own city.”

But that story went on to become one of Next City’s most popular this year. It gained 25 comments, most of them several paragraphs long and substantive. As it turned out, there was a whole community of people working to improve Camden who felt just as frustrated at seeing their efforts ignored in the larger press.

Local activists began reaching out, and that’s when Danley, an assistant professor of public policy and administration at Rutgers University-Camden, realized he could step up and create a hub for discussing the many issues that play out in the city on a daily basis.

“It became clear that there needed to be more places to discuss the city at the micro-level,” Danley said. So he created a blog that aims to do just that.

Local Knowledge, which launched today with a rutgers.edu domain name, will feature writing about the importance of knowing all about your city — and listening to the community members who probably know more. It will deal with hyper-local issues that don’t always make it to the media’s radar, Danley said, right down to block parties and dog poop. For instance, he’s looking forward to an upcoming post about “what a ‘community meeting’ is.”

“I hope the blog becomes a few things,” Danley wrote in an email. “The first is a place to discuss ideas around the very local. I want to discuss city blocks and city issues, and particularly how, why and if knowledge from community members ‘matters.’”

The focus will remain mostly on Camden, though Danley plans to occasionally draw from his work in New Orleans and Philadelphia as well. (An introductory post has a few anecdotes about the Big Easy, where Danley used to live.) He will also reach out to guest writers to riff on their experiences in other cities.

Right now, most of the writing will come from Danley himself as well as his students, many of whom had already been doing community work in Camden. “It’s blown me away how much good work is being done at Rutgers, particularly by students,” he said. From time to time Local Knowledge will showcase the efforts of Rutgers students and faculty in the city.

Danley said that he’ll use Twitter to coordinate much of what happens on the blog, so if you have anything to pitch you can find him @SteveDanley.