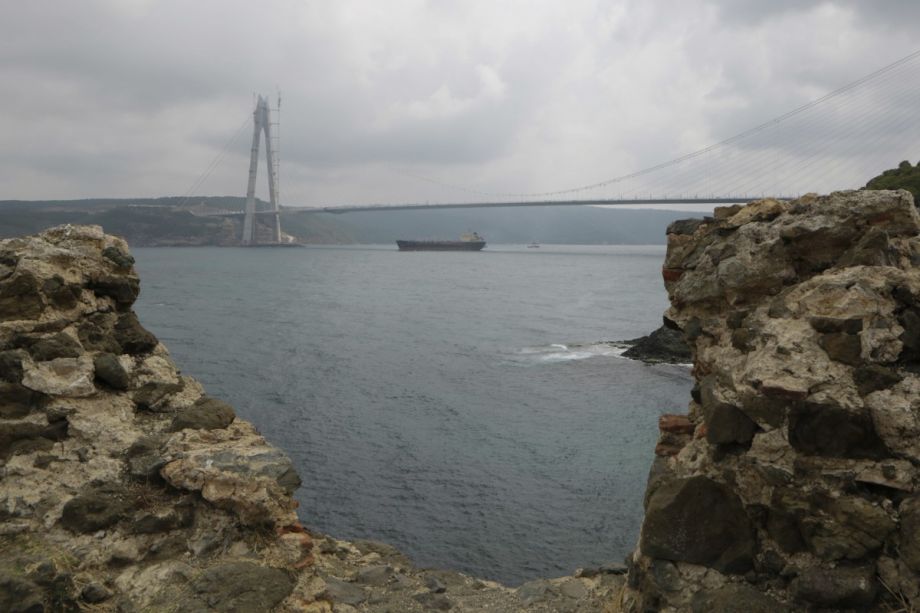 Third Bosphorus Bridge Completed in Record Time
On Aug. 26, the Yavuz Sultan Selim Bridge across the Bosphorus Strait in Istanbul opened 27 months after construction began on the span. According to an article in the Railly News, this is nine months ahead of schedule. Turkish Transportation, Maritime and Communications Minister Ahmet Arslan said the 27-month timeframe could also set a world record for completion of a span of this distance.

The bridge deck carries eight lanes of vehicular traffic and has provision for a two-track rail line in its middle. Ninety-five km (59 miles) of freeways and another 215 km (133.6 miles) of new access roads connect to the span, which cost 8.5 billion Turkish lira ($2.88 billion U.S.) to build.

A PBS NewsHour report on the bridge’s opening notes that heavy trucks will be required to use the new bridge instead of the two existing Bosphorus crossings, a move that should help alleviate traffic congestion in the city of 14 million because it is farther from the city center than the other two bridges. NewsHour also reports that critics have protested the destruction of the last remaining forests in Istanbul to build the bridge’s access roads. The Railly News report cites figures provided by Arslan that state that nearly 300,000 trees were relocated, another 2.1 million trees replaced them, and 5.1 million trees total will be planted along the highways leading to the bridge.

Minnesota Governor Seeks Alternate Funding for Southwest LRT
With a special session of the Minnesota legislature stymied because of continued opposition to state funding for the proposed Southwest LRT project connecting Minneapolis with Eden Prairie, Gov. Mark Dayton is now searching for a “Plan B” to come up with the $135 million needed to leverage $895 million in federal funds for the line, Minnesota Public Radio reports.

According to the story, the leadership in the Republican-controlled House insists that there is no particular urgency in nailing down state funding now. House Speaker Kurt Daudt cited an email from Metropolitan Council Chair Adam Duininck to Dayton saying that the federal government was holding off on a funding agreement until 2017 because of pending legal challenges, but a council spokesperson denied this was the case.

Dayton, a Democrat (in Minnesota, Democratic-Farmer-Labor), called a public meeting Aug. 25 to which legislators, local elected officials and business leaders were invited to discuss options for securing the needed funds. One possible source suggested by the head of the Eden Prairie Chamber of Commerce is a fund created to equalize property tax disparities, but Sen. Scott Dibble, chair of the Transportation Committee in the DFL-controlled Senate, said he didn’t believe there were viable alternate sources of funds available. Saying the project is in jeopardy, he suggested that the only way out of the impasse was the election of more transit-friendly legislators in November.

BRT Comes to the East Bay
Construction has begun on the first bus rapid transit line to serve the San Francisco Bay Area, according to an Alameda-Contra Costa Transit District (AC Transit) news release that appeared in Mass Transit.

The 9.5-mile line will connect Oakland’s Uptown district with the San Leandro BART station via a route that mainly follows International Boulevard and East 14th Street. The line will have 33 stations spaced roughly a third of a mile apart — 21 in a center median and 12 at curbside. Buses will operate in a dedicated bus-only lane with signal priority technology that allows buses to extend green lights.

The line will cost $108 million to build. Funding was provided by a $174 million federal Small Starts grant that also covered preliminary studies and design work.

A fleet of 60-foot articulated hybrid diesel-electric buses will provide service on the route, which AC Transit General Manager Michael Hursh said would give riders “more direct access to homes, businesses, places of education and medical facilities that were previously in between our stops.”

Know of a project that should be featured in this column? Send a tweet with links to @MarketStEl using the hashtag #newstarts.