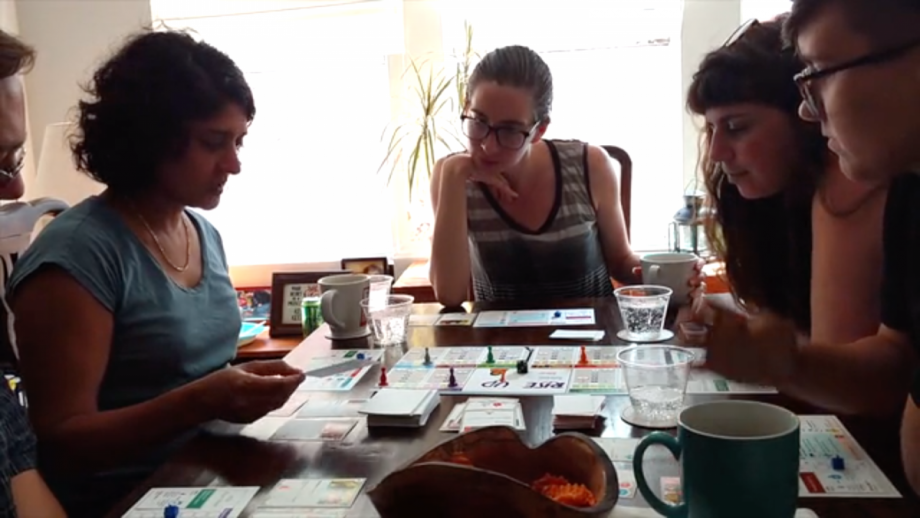 Brian Van Slyke grew up playing board games. He vividly remembers playing Sorry! with his mother on weekends as a young child. Later, when he was teaching disconnected youth in Western Massachusetts, Van Slyke came up with a game to teach them U.S. history.

Today, Van Slyke is co-founder and lead game designer at the Toolbox for Education and Social Action (TESA) Collective, a worker cooperative that creates tools and programs that organizations can use to engage and educate people on various causes related to social justice. They’re currently taking backers via Kickstarter for Rise Up: The Game of People and Power.

Rise Up is a game about building movements and changing systems. TESA Collective has spent about a year designing it and also working out a manufacturing supply chain that reflects the values and vision that the game espouses.

“What we really want people to take away from the game, is that just like Rise Up, movement building is a cooperative process,” Van Slyke says. “It’s a cooperative game, so the game is playing against you. It really requires people working together to beat the system.”

They started with a rough draft of the game mechanics, testing it out with friends and family of TESA Collective members, who are based in different parts of the country, including Western Massachusetts, Oakland and Chicago. Testing continues with community groups involved in a range of causes; some first learned about TESA Collective from its first board game, Co-opoly: The Game of Cooperatives, which teaches players about starting and running a worker cooperative.

“We were testing with a couple different sets of people, some that were real game enthusiasts, some that weren’t enthusiasts but liked the idea of playing a game to teach others about their causes,” Van Slyke explains.

TESA Collective wanted to make both crowds happy. In designing Rise Up, the balance was so tricky, TESA Collective ended up designing two different versions of the game. One side of the Rise Up board contains the full version, closer in complexity to something along the lines of Settlers of Catan or Pandemic, best used in a game night setting with friends and family or experienced players. Flip the board over, and there’s a less complex, streamlined version, perhaps more appropriate for a workshop setting or with younger children.

In either case, as a game, it had to be fun. Van Slyke says they got feedback from community groups saying it really replicates a lot of the situations movement builders have to go through, but it wasn’t too intense. Meanwhile, Van Slyke says game enthusiasts also had a lot of fun, and that the experience of learning about how movements create systemic change lingered with them afterward.

To create the artwork, TESA Collective worked with another co-op, Design Action Collective (DAC), based in Oakland.

“We wanted, when people begin to look at those cards, to see this really vibrant picture and be able to imagine themselves in it,” Van Slyke says. “Design Action Collective crafted this beautiful, inspiring imagery that sort of sucks people in as they play.”

DAC is a majority women, people of color or LGBTQ outfit. They’re a spinoff of the former Inkworks Press Collective, a worker-owned print shop in Oakland that closed down earlier this year. Ex-Inkworks members landed at Community Printers, a worker-owned print shop in Santa Cruz, California that’s producing nearly all the Rise Up game materials. They will also manage assembly, packaging and shipping of the game. It took five months of back-and-forth to come up with a supply chain for Rise Up that is 97 percent worker-owned.

“We’ve done card games before, but never a board game,” says Ross Newport, one of the founding worker-owners at Community Printers. “If it was just designing a game board it would be fun, but to be helping designing a game and pieces for a game about something that is near and dear to our hearts, it is really cool.”

Community Printers currently has 34 full worker-owners, and one apprentice on their six-month worker-owner track. According to Newport, they’re about one-third Latino, 25 to 30 percent of members are women, and about a third have at least some education from a four-year college. “Printing is kind of a mix like that, there’s blue-collar aspects of the business, but also admin, sales, pre-press that are more technical computer kind of skills,” he says.

TESA Collective anticipates a first production run of about 4,000 copies of Rise Up, priced at $49 each.

The Kickstarter campaign ends on Nov. 3.