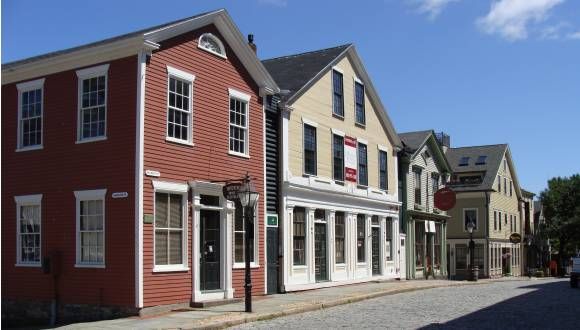 This week, we’re all about ports. In conjunction with Ryan Briggs’ Forefront story on an expansion project at the Port of Philadelphia, Emma Fried-Cassorla delivers a five-part series on various issues facing port cities around the country. Read the first two installments here and here.

Coastal New England cities are many things at once. In the case of New Bedford, Mass., it is the largest fishing port in the country, a city with history pre-dating the Pilgrims’ landing in Plymouth, a National Parks Service-designated National Historic Park, home to Fredrick Douglas and starting location of Herman Melville’s whaling adventures.

Finally, the city is one of the Environmental Protection Agency’s largest Superfund cleanup sites.

Recorded history of New Bedford, predates the Pilgrims’ landing in Plymouth by 18 years. English explorer Bartholomew Gosnold landed and surveyed the area, but decided against leaving a permanent settlement at the harbor. Had he done so, New Bedford would have been the first permanent English settlement in the Northeast.

It wasn’t until almost a hundred years later, in 1787, that the town was formally established. It soon became home to whalers, fishermen, textile workers and shipbuilders. The city reached its peak as the center of the whaling industry in 1857, sending out more ships than all other American ports combined and leading to its status as the richest city per capita in the world.

As noted by Herman Melville in Moby Dick, “The town itself is perhaps the dearest place to live in, in all New England… nowhere in all America will you find more patrician-like houses, parks and gardens more opulent, than in New Bedford.”

Whaling didn’t last, and was replaced in the late 1800s by a booming textile industry. At its height in 1920, it employed more than 41,000 men, women and children in New Bedford’s 70 cotton mills.

The whaling and textile industries exist in the city now only as legacy, cultural history and in the ways they shaped the waterfront and downtown development.

Despite the loss of prominence as a whaling and textile center, the city continues as the largest fishing port in the country, generating in excess of $1 billion annually from commercial fishing, shipping, recreational boating and cruises. The city’s waterfront is shaped by:

Seeing as fishing is the city’s largest industry, it is perhaps surprising that the harbor is also one of EPA’s largest Superfund sites. In the 1940s through 1970s, Aerovox Corp, now known as AVX, dumped carcinogenic PCBs into the harbor from its transformer plant. The Agency placed the harbor and surrounding sites on the Superfund list in 1982 after closing the harbor to fishing and shellfishing in the late 1970s.

A settlement in early October found AVX liable for damages and responsible for $336.25 million plus interest for harbor cleanup. This will be the largest single-site cash settlement in the history of the Superfund program, and will reduce the cleanup timeline of the most contaminated sections from 40 years to approximately six years. Before the settlement, the $15 million in annual funding only allowed for about 40 days of dredging per year on a worst-first basis.

Cleanup of the harbor is not without controversy. As Anthes-Washburn notes, moving PCB-laced sediments has the potential to contaminate clean parts of the harbor. However, leaving them in place exposes the public and all aquatic organisms to the chemicals. The proposed solution: A combination of upland disposal and confined aquatic disposal cells (CAD cells).

Upland disposal is used for the most contaminated sediments — those located nearest to the transformer facility, where PCBs density can reach as high as 25 percent. EPA cleanup crews use hydraulic dredging to vacuum up the sediments. An on-shore facility removes the water, leaving a cake of almost pure PCBs. These chunks of hazardous waste are then shipped to an appropriate disposal facility in Michigan. The Port estimates that this process costs $600 per cubic yard, which means that cleaning up the entire harbor this way would cost a staggering $35 billion.

The rest of the contamination is too low to require upland disposal. Instead, the port is using CAD cells. CAD cell design is represented in the above graphic: A hole is dug, the contaminated top layer from neighboring sites is placed at the bottom of the hole, clean sediments are placed on top, and a natural biological layer forms above. The PCBs will remain stably confined to the lower layer, and will not be accessible to aquatic organisms and therefore removed from the food chain. The projected estimate for this procedure is 10 times less expensive — only $60 per cubic yard.

Though New Bedford has its environmental legacy, the town largely chooses to concentrate on the extensive history and attractions of this same waterfront. Development at the waterfront and in downtown areas mirrors the current and past industries — fish processing and packaging plants, former textile mills and a harbor full of hundreds of commercial and recreational vessels. Some of these areas are actively preserved under the National Park Service’s designation of 34 acres as the New Bedford Whaling National Historical Park.

Future development in the city places a high priority on increasing appreciation of and interaction with the working harbor, as noted in the Municipal Harbor Plan. The plan includes increasing public access to the waterfront, developing a harbor-wide water shuttle service, expanding water-born recreational activities and integrating public art projects into the working waterfront. The city is also looking to attract tourists by opening up fishing vessels, processing facilities and the seafood auction to tours and by creating an open-air fish market for direct sale to tourists.

The city sees its working waterfront not just as a tourist destination, but also as a location for a thriving mixed-use community. Fish markets will be located next to converted mills and brownfield-turned commercial centers.

To that end, the city has worked with the National Oceanic and Atmospheric Administration as a Brownfields Showcase Community. With the help of NOAA, the city is working to revitalize its 150 acres of coastal brownfield sites, or former industrial or commercial sites affected by real or perceived environmental contamination. Remediated sites have already led to the creation and retention of over 1,100 jobs and nearly $80 million in private investment.

The city also recently completed a report surveying New Bedford’s 101 mill sites and structures to identify where opportunities exist for redevelopment. Projects have already been springing up around the city, such as the Lofts at Wamsutta Place and the conversion of the historic Victoria Riverside Mill into a series of townhome lofts.

The weight of being one of the nation’s largest contaminated sites could have crushed the city. Social and economic challenges clearly still exist, but the city is using its environmental and historic legacy to create a vibrant working waterfront that serves as the city’s main attraction, not an area to be afraid of.