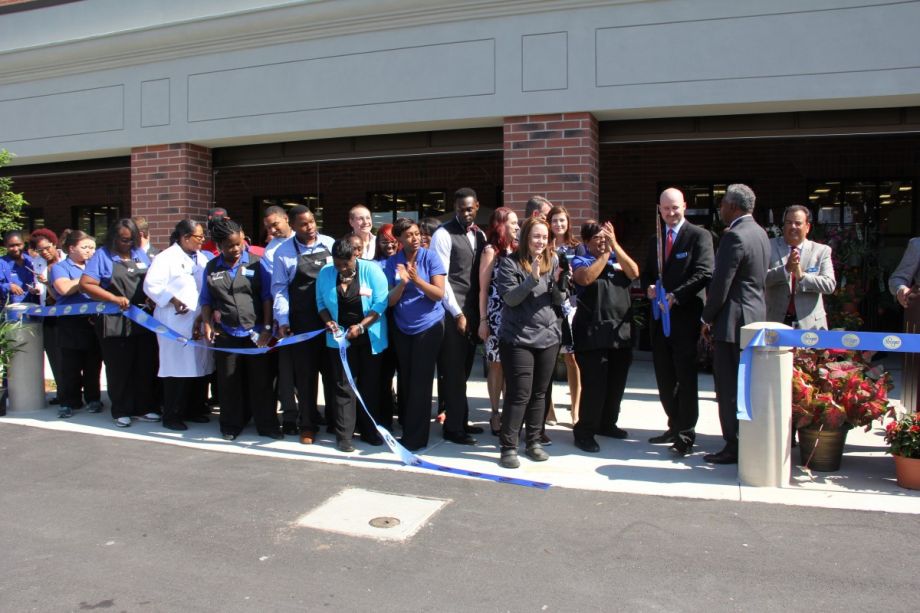 Employees and project partners cut the ribbon at the grand opening ceremony for a new Kroger along the Atlanta BeltLine. (Credit: The Reinvestment Fund)

At 800 Glenwood Avenue, in southeast Atlanta, on June 29, a ribbon cutting marked the grand opening of a Kroger Marketplace in a renovated building. The ceremony included a performance by the marching band from Maynard H. Jackson High School, which is just across the street.

Running along one side of the block is the BeltLine, a chain of parks and other green spaces built along a 22-mile loop of historic rail lines that encircle Atlanta’s urban core. Similar to NYC’s High Line, it has become a polarizing force, as a wave of development threatens to displace the working-class communities of color along its path. Some of that development has even been financed through programs intended to benefit low- to moderate-income communities. This Kroger for instance, financed part of its $36 million cost through new markets tax credits.

Born and raised in Atlanta, Tené Traylor has lived on the east side of Atlanta for 11 years, about five miles from the new Kroger. She stopped by to visit it last week.

“It’s a beautiful Kroger’s,” says Traylor, who works in philanthropy. But she isn’t completely convinced the benefits promised to low- and moderate-income residents by any new development are in any way a sure thing, even if it’s connected to new markets tax credits or some other equitable development subsidy.

“The challenge is always around accountability and who holds that,” Traylor says. “That’s our biggest challenge in Atlanta. I’m not quite sure we have a mechanism to hold these opportunities accountable so it does not undermine existing communities or it does not lose its purpose.”

Kroger, in this case, has promised to hire half the 250 employees for this location from the surrounding neighborhood. They even told local officials that the jobs will come with career advancement opportunities through in-store training programs.

The national chain’s track record on local hiring was enough to convince the Reinvestment Fund, a Philadelphia-based CDFI (community development financial institution) to provide the new markets tax credit allocation for the project.

“We looked carefully, spent a lot of time with them to try to understand their plan for job creation and local hiring. They are trying to live up to a commitment of a high amount of local hiring,” says Nancy Wagner-Hislip, chief investment officer at Reinvestment Fund. “Fifty percent local hires is on the high side of what we see.”

Since 2004, Reinvestment Fund has received and allocated $473 million in new markets tax credit financing, which has supported over $780 million in total investment in low-income communities. While local hiring is not a requirement for new markets tax credit financing, it can still make the difference for any given deal, because of the way the program works to incentivize private investment in places usually deemed too risky.

The U.S. Treasury, through a hyper-competitive process, periodically allocates a limited number of new markets tax credits to organizations such as Reinvestment Fund. In 12 allocations since the program was created in 2000, Treasury has allocated $43.5 billion in new markets tax credits, leveraging $8 in private financing for every dollar of federal funding. While banks or other investors can also apply to receive an allocation, many still go through organizations like Reinvestment Fund to take advantage of all the available tax credits. (In this case, U.S. Bank was the investor on the deal that received the tax credits)

“When you are an entity with an allocation of new markets tax credits, you are extremely popular,” says Wagner-Hislip.

If a project promises to create jobs and career paths for people from low- to moderate-income households, and the project partner can prove that it’s done so before, it’s more likely an entity like Reinvestment Fund will pick that deal out of the many possible deals that come on their radar.

“It was really Invest Atlanta that called out this deal to us as one that they felt was a strategically important deal but they did not have new markets tax credits to allocate,” Wagner-Hislip says, referring to the city’s development authority.

All that said, Kroger was still the primary instigator, as they originally went to Invest Atlanta, who eventually introduced them to Reinvestment Fund, who was interested in taking on an Atlanta project as well as mitigating food deserts. According to Reinvestment Fund’s estimates, 43,000 people live within 2 miles of the store who currently do not have easy access to another supermarket.

But as Traylor points out, there’s the risk that the working-class families of color that have been long-term residents of the neighborhood may still get displaced as property taxes and rents rise adjacent to the BeltLine. The signs of change are there: Maynard H. Jackson School’s demographics have shifted, from 98 percent black in 2011 to 73 percent black and 27 percent white in 2015. Enrollment shot up, indicating the shift was due to an influx of new, whiter residents. Whether the current black population will be able to afford to remain in the neighborhood is not clear.

“The question is not how did the Kroger get there, but who is the Kroger for,” says Traylor.

Having the community’s voice at the table would help answer that question, but the hectic nature of the new markets tax credit program doesn’t make it easy. Historically, Congress has had to reauthorize the program every two years, and it has never been certain they would. When the applications go out, there are usually myriad changes that groups like Reinvestment Fund has to digest and react to, followed by a mad dash to put the extensive application together because everyone knows it’s possible it will be the last time these credits will ever be allocated, or at least the last time for a while.

“There’s a lack of predictability around funding cycles and funding requirements. Then the application sort of just drops and everybody goes crazy,” says Wagner-Hislip. “If it was permanent and predictable, you would see more organizations taking the time to both pick the best projects out there and to actually maybe take more time to enforce or craft better requirements and benefits agreements.”

Just last year, the new markets tax credit program was approved for the next five years, which could provide an interesting test to see if the quality of the projects approved improves, Wagner-Hislip says. According to her, the program otherwise has the flexibility to be very responsive to community voices.

If only there were more time and space to make that easier.