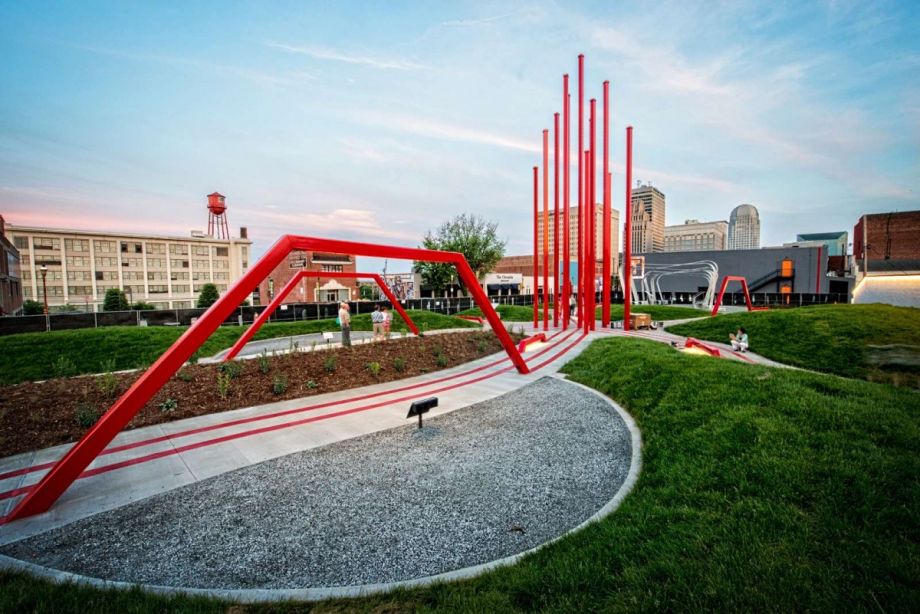 Winston-Salem’s first “art park,” dubbed ARTivity on the Green opened last weekend with the goal of turning a parking lot near an arts district into a green space full of creative installations evocative of the city’s industrial past.

Situated on Liberty Street between Wake Forest University’s Innovation Quarter, a hub for biomedical science and tech development, and the Arts District downtown, the half-acre park’s focal point is red “smokestacks” that will lead visitors into the park and light up at night and create fog formations.

The project was funded by local nonprofit Art for Art’s Sake (AFAS) on a budget of $2 million. In addition to art installations and sculptures, the space also showcases a heavy use of steel (again, to evoke the city’s industrial past) — with steel benches resembling sawhorses in addition to standard spaces for lounging and picnicking.

The park also has a large wall that will serve as a canvas for murals by local artists. The Winston-Salem Chronicle reported earlier this year that 10 mural artists will begin working now that the park has officially opened.

“We wanted to create a space that speaks to Winston-Salem’s reputation as ‘The City of Arts and Innovation,’” said Harry Knabb, chairman and chief executive of AFAS, “while at the same time paying tribute to its industrial, tobacco-and-textiles past.”

From inception to ribbon-cutting, blueprints to construction, the project used local vendors.

“The Liberty Street area is the next frontier of development in the area. This is leading the way along that corridor. It is going to bring a much-needed sense of activity,” Councilman Derwin Montgomery told the Chronicle. “ARTivity is going to be symbolic of the art and activity that will be happening there, which in turn will lead to much more happening in the area.”