In Its Search for New Approaches to Affordable Housing, Southern California Is Thinking Small – Next City

In Its Search for New Approaches to Affordable Housing, Southern California Is Thinking Small 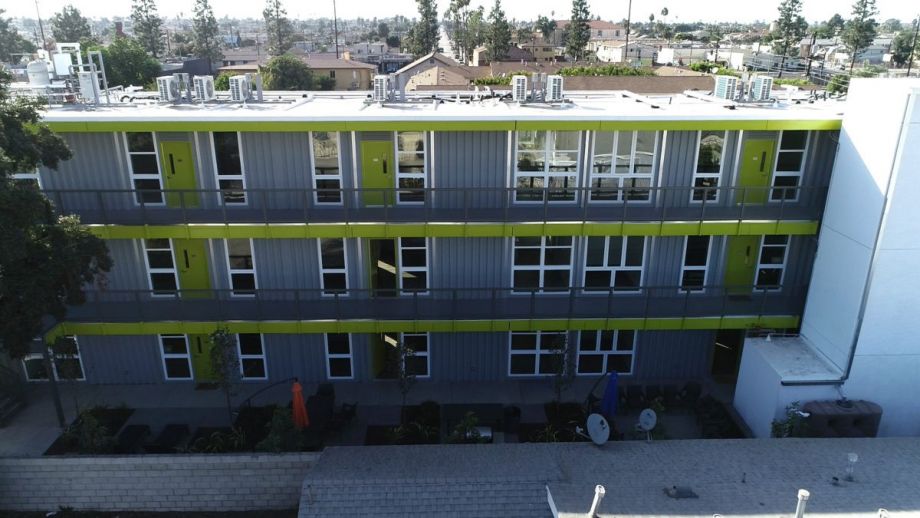 The Steaven K. Jones Supportive Community in Los Angeles, developed by FlyawayHomes, took seven months to build using modular manufacturing. With eight four-bedroom units, it can house 32 tenants and has been master leased to a subsidiary of The People Concern, a nonprofit that provides affordable housing and services to vulnerable communities.

Finding an affordable apartment or house in California has become nearly a magical event. The housing stock is thin, and cities are struggling to build more in order to meet increasing demand. The City of Long Beach and the County of Los Angeles, in particular, are both experiencing crisis-level affordable housing shortages.

In response, civic leaders in Southern California are pursuing inventive methods to provide affordable housing for residents — and micro-housing is coming up as a big idea. Although still in the early stages of exploration, Long Beach has looked to refurbished shipping containers, and Los Angeles County is launching a pilot to investigate 3D printed units.

In Long Beach, the sprawling harbor district features acres of empty shipping containers in bright colors — red, green, blue, orange. Working with the city to find affordable housing sources, FUSE executive fellow Rick Ryba saw those containers — which possess little value — as potential homes. “They’re only carrying cargo one way,” he said. “What typically happens is that most of them are eventually just stripped and melted down for scrap, but usually only when the value of scrap gets high enough that it makes sense.”

The containers are one potential mechanism to address a crucial unmet need for affordable housing in Southern California’s third-largest city. Though it’s still somewhat rare, refurbishing containers as homes is not unheard of. Flyaway Homes, for example, has built two affordable housing developments using these containers, and the organization recently received a $1 million grant from the L.A. County Homeless Initiative to build more. London has experimented with containers, as has Detroit. And in Long Beach, one homeowner added a pair of shipping containers to the back of a traditional single-family house to increase living space, and 10 of them make up SteelCraft, a commercial space hosting food and drink eateries.

Ryba is fleshing out what it would take to make the idea into reality in Long Beach, conducting landscape analysis and comparing costs. The containers would fill a number of critical needs. They typically cost $25 less per square foot of construction over a traditional single-family home. They offer flexibility in design: a builder can keep them largely intact, adding windows and doors, and either retain the exterior framing or surround it with traditional materials to make its look more consistent with existing housing in the neighborhood. And it takes only a matter of weeks or months to refurbish containers, as compared to the half year or more that it takes to build a traditional construction home or unit.

One hurdle in the way, however, is access to land. Long Beach is largely built to its limits, and although the city has been working to address the issue, passing a land use plan this June, efforts have met opposition.

“Like most of coastal California, the challenge is acute here,” said Christopher Koontz, planning bureau manager for Long Beach. Nearly half of Long Beach’s population spends at least 30 percent of their household income on rent. A quarter spend half their gross income. In 2012, rent for a two-bedroom apartment averaged $1,350. By 2017, that number jumped to nearly $1,900.

Long Beach has roughly 1,900 residents experiencing homelessness, with a much larger but unknown number of people experiencing housing insecurity as a result of overcrowding, unaffordability, eviction or forced moves, and other economic factors. Its homeless population has actually gone down significantly since 2013, but a task force was formed in 2018 with a goal of reducing it further through an array of programs, including building more affordable housing.

The city has seen an investment of about half a billion dollars in the past decade in affordable housing but still has significant gaps to fill. It has outlined a variety of ways to address its housing crisis, including beefing up construction of micro-units, whether with repurposed shipping containers, prefabricated factory-built units, or conventional construction methods.

On any night, between 50,000 and 60,000 people don’t have a roof over their heads. It’s a dire picture for those with a roof, too: A recent analysis by Freddie Mac Multifamily ranks the Los Angeles metro area as the third most rent-burdened in the nation. To address the affordable housing crisis, which is even more drastic than in Long Beach, FUSE executive fellow Kishani De Silva is working with colleagues in the L.A. County Development Authority (LACDA).

The county is considering a variety of housing possibilities, including micro-housing units, which are typically about the size of a college dormitory room. De Silva is exploring the feasibility of constructing 3D printed houses. Although only a few such houses are up and in use so far in the U.S., they offer significant promise because they can reportedly be made in as little as 24 hours at a cost of around $10,000.

“Stemming from the notion that one size does not fit all, alternative housing models are needed to house displaced populations faster,” De Silva said. Ultimately, she said there is an imperative to end generational poverty, as well as help those who have recently become victims of earthquakes and forest fires and need shelter immediately.

Monique King-Viehland, executive director of the LACDA, notes the challenges of developing affordable housing in L.A. County. “In a county where 58,000 people are homeless on any given night, where we have a deficit of more than 500,000 affordable housing units and a vacancy rate of less than 3 percent, our work at the LACDA is focused on increasing the supply of affordable and supportive housing development as quickly as possible, while also ensuring that we leverage our funding — county, state, and federal resources — as far as possible,” she said. “This means we must always be looking for new ways, smarter ways, to effectuate our goals, which requires a delicate balance between maintaining our focus on continuing to scale up our traditional large-scale project structure while also exploring innovative approaches like 3D printed houses, modular, and more.”

Construction-tech company Icon, in partnership with nonprofit homeless advocacy group New Story, has already printed the country’s first zoned 3D printed house in Austin. It took 48 hours to create, with initial printing costs of around $10,000. A newer version of the printer will allow them to print homes in just 24 hours and will be used to create a community of 3D printed houses in Latin America in summer 2019. The development will house about 400 people who, on average, make less than $200 monthly and don’t have access to affordable housing.

Icon builds the guts of the houses out of a cement mix called Lavacrete. By skipping the usual labor and materials costs, Icon can erect the house at a dramatically reduced price and with little environmental impact compared to the traditional model of homebuilding.

On a small scale, the success of projects such as Icon and New Story’s has inspired De Silva and others in Los Angeles. “We want to reduce construction time and cost in order to increase housing supply and secure housing stability,” De Silva said. “Using a smarter, faster, cheaper model, the micro-housing pilot aims to address demand.”

What Needs to Happen

In both Long Beach and L.A. County, redesigning zoning and land use regulations will be necessary to get these initiatives off the ground. “We hope to have rule changes in place by the end of the 2019 calendar year,” Long Beach’s Koontz said. “And then it’s up to the private market to hopefully within another year after that be able to deliver a project into construction.”

Ryba has identified a number of measures — increasing funding of the city’s affordable housing trust fund through mechanisms such as a proposed inclusionary housing policy, revising certain zoning and building codes to make construction of micro-housing easier and quicker, and uncovering innovative new housing designs — that must be undertaken in order for micro-housing to be successful.

In Los Angeles, De Silva is spearheading a pilot project designed to develop micro-housing units, including 3D printed houses, on two vacant parcels of land that the LACDA already owns. The pilot gives the county a chance to compare different housing designs for price, time to completion, and market viability. The LACDA will use this data to refine its methods for providing affordable housing. In doing so, it hopes to take one more step toward ending generational poverty by offering a menu of options that ensures people who need housing can find a roof over their heads.

Dan Simmons lives in Milwaukee, Wisconsin, where he writes full-time for the Mayo Clinic Health Letter and also contributes to the Washington Post, Milwaukee Magazine, and other publications.