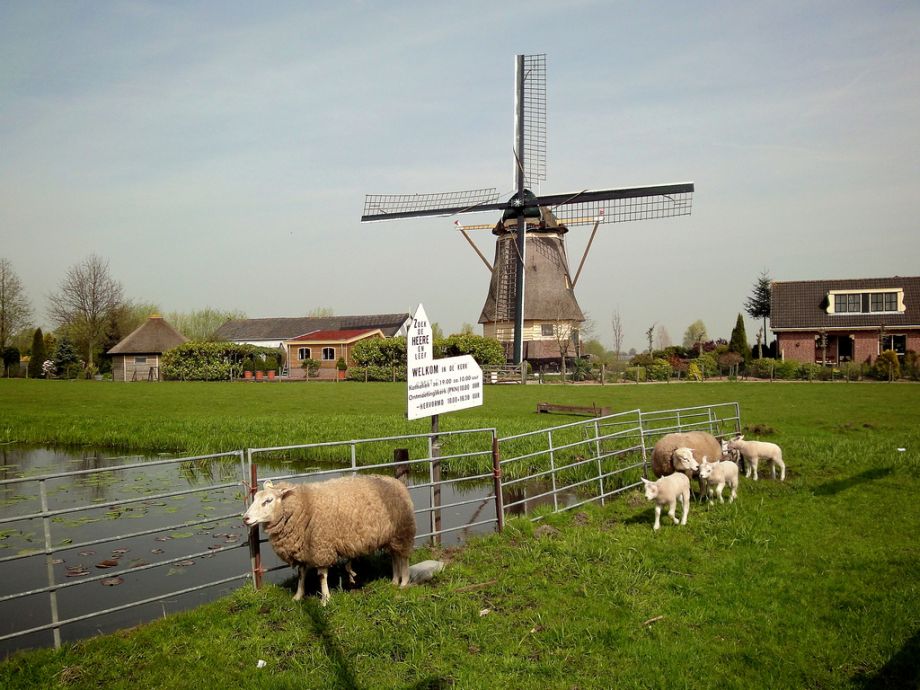 Although visitors to the Netherlands often remark on the picturesque fields that fly past their train window, few of them realize that they’re looking at one of the strongest agricultural production systems in the world. After the United States, the Netherlands exports more food than any other country on the planet – an incredible feat considering the U.S. is over 230 times bigger. A major part of that production is livestock: although this tiny country is barely the size of Maryland, the Netherlands is Europe’s leading exporter of meat.

Efficiency is what makes this country an agricultural powerhouse, but it also creates a landscape where almost everyone lives in close proximity to livestock. With only 17 million people and 118 million farm animals, the Netherlands grapples with a legitimate concern about deadly bacterial outbreaks. For many countries, food security has become a major issue as climate change and natural disasters wreck havoc on older systems. In the Netherlands, this concern has pushed farmers to move towards more sustainable production systems that, ironically, are a mix of technical innovation and old-fashioned farming methods.

Since 1950, most farmers in developed countries have routinely added antibiotics to animal feed, increasing growth rates and preventing factory-farmed animals from spreading infections. More recently, however, antibiotic use in livestock has become a hotly debated issue. Scientific studies have linked the routine use of antibiotics to the proliferation of drug-resistant “superbugs” like NDM-1 and methicillin-resistant Staphylococcus aureus (MRSA). Outbreaks caused by these superbugs have increased over time and infection has often spread from animals to humans.

In 2006, the European Union banned the use of antibiotics as a growth agent. Since 2007, however, Dutch livestock farmers have cut their use of antibiotics in general by more than half. Remarkably, they’ve done this without any negative effects on production rates or profits, and their techniques are instructive for other countries looking to do the same. 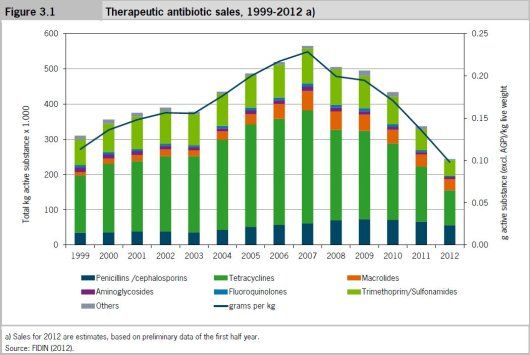 Use of antibiotics in livestock has been falling in the Netherlands since 2007.

The drug-use reduction came after an outbreak of MRSA. In 2004, the persistent infection started in Dutch pigs and quickly spread to other animals and people. A farmer’s young daughter was the first victim. Gerda Verburg, the minister of agriculture, quickly saw the connection between the use of antibiotics and the development of MRSA. She introduced a new law that required any sick animal to be inspected by a veterinarian before antibiotics could be administered (by that same veterinarian) and set a target of 50 percent antibiotic reduction within three years. Although it meant changing some practices, keeping stalls cleaner and replacing feed, farmers have been overwhelmingly enthusiastic about the policy. In fact, the Dutch Veterinary Medicines Authority (SDa) announced in June that antibiotic sales to livestock farms dropped another 20.5 percent between 2012 and 2013.

Early data indicates that the Dutch experiment has been a success: drug-resistant bacteria are declining in cows, pigs, chickens and veal. By redefining agricultural practice in favor of both animal and human long-term health, the Netherlands has increased it’s collective resilience to the next devastating outbreak. The next step will be to see if there is a similar decline in drug-resistant bacteria in humans. Where there is data available to support this claim, the experiment will set a strong precedent for international proponents of reduced antibiotic usage in livestock.

In support of these farms, the Netherlands also has a number of public and private agri-food R&D centers where more efficient production chains or other innovations are developed and implemented. At Wageningen University and Research Center, the “Food Valley” has become one of the most authoritative agri-food and nutrition research centers in Europe. The university has a special monitoring study called MARAN that tracks antibiotics usage in livestock. These detailed statistics make policy changes like Verburg’s stricter usage regulations easier to analyze and evaluate.

The Netherlands is also exporting this knowledge to other countries. In June 2014, Dutch Prime Minister Mark Rutte met with Vietnamese Prime Minister Nguyen Tan Dung in Hanoi to establish a strategic agricultural partnership following talks on production and food security. The Netherlands has similar bilateral agreements with countries that are currently developing their agricultural industries. If their experiment with reduced antibiotics continues to succeed, they may soon become an example for developed industries as well.