Will Post-Earthquake Rebuilding Lead to a Healthier Nepal? – Next City

Will Post-Earthquake Rebuilding Lead to a Healthier Nepal? 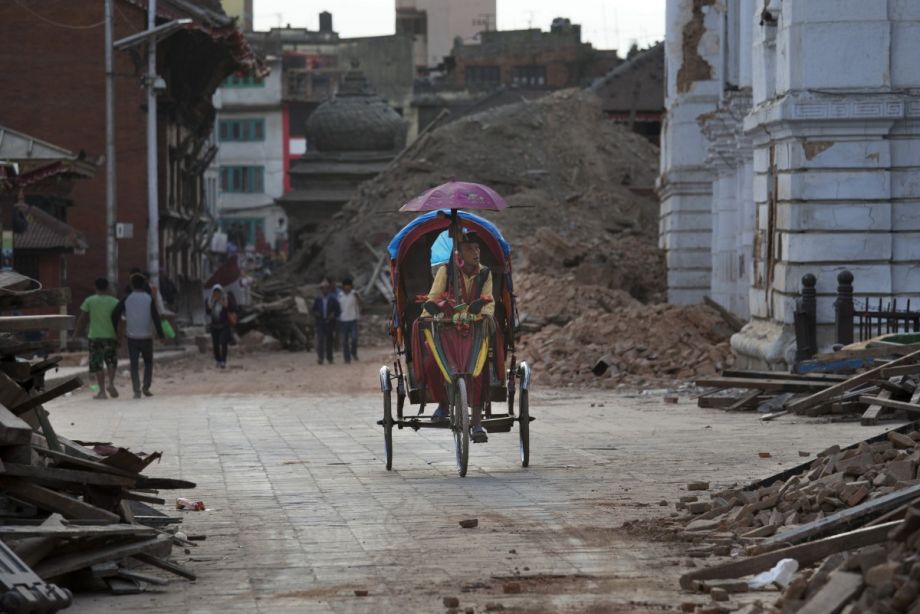 The photos of Nepal are everywhere: a glimpse into the excruciating pain of the people trapped in rubble, and images of those watching their relatives, who were alive just days ago, burn on improvised funeral pyres. Videos show survivors running when aftershocks shake the capital. A colleague uploads an image of the crowded football pitch where he is sleeping, captioning it “a misery.”

The tough work ethic of Nepal is also just as clear. People pull living humans from rubble and carry the injured on sledges. At Kathmandu’s Bir Hospital, medical staff are working around the clock on a floor slicked with blood. Outside, NGOs are already distributing emergency supplies, despite damaged and poor-quality roads. A nation in ruins is already at work coping with its tragedy.

Amid the broken ground, possibilities for change have opened too. In Nepal, where informal economies and calls for equitable distribution of resources have dominated for years, what new order will the 2015 earthquake bring?

During a disaster, much work seems neither informal nor formal. Rather, the situation recombines formality (of medical professionals, not-for-profit operations and international diplomacy) with informality (the participation of locals in saving others, the crowdsourced global flood of donations and the sheer scramble to survive however possible). The muddling is surprisingly profound, offering openings for social and health-related changes that are unlikely under ordinary constraints. As Rebecca Solnit wrote in her 2009 book A Paradise Built in Hell: “In the moment of disaster, the old order no longer exists and people improvise rescues, shelters, and communities. Thereafter, a struggle takes place over whether the old order with all its shortcomings and injustices will be reimposed or a new one … perhaps more just and free … will arise.”

Often, these post-disaster revisions begin with informal initiatives by ordinary people. As Solnit describes in her book, a group of informal “street medics” opened Common Ground Health Clinic in New Orleans on the heels of Hurricane Katrina in 2005, attempting to improve upon the shuttered Charity Hospital and eventually formalizing as a federally qualified health clinic. (Full disclosure: I was once a street medic and helped train one of CGHC’s founders.) Widespread public demands after the Rana Plaza atrocity made factory inspections standard in Bangladesh for the first time.

Nepal differs from the Bangladesh garment industry and New Orleans healthcare, though, because of its overwhelming informality and poverty before this week’s catastrophe. According to a 2004 assessment by the International Labour Organization, two of every three workers in Nepal are informal agricultural workers, and just 2.26 million workers in this country of 23 million people have non-agricultural jobs. Most of these jobs are clustered in urban areas — including Kathmandu, which in recent years has been experiencing rapid growth — and 73.3 percent of them, or 1.66 million jobs, are informal. The country is well-known for its poverty — a tremendous block to any public health goal. Men earn an average of 2400 Nepalese rupees per month ($23.59 U.S.); women, just 57 percent of that, or $13.62. The same report notes child labor is common, and says, “It is reported that almost half of the [child labor] work involves slave-like conditions.”

If an earthquake strong enough to move the entire capital 10 feet southward foments substantial economic changes, it’s not because crisis is novel here. In the 1990s, a Maoist insurgency sought to violently overthrow the Nepalese monarchy. The ensuing civil war killed tens of thousands, interrupted the country’s development and ultimately resulted in the monarchy’s dissolution. (Maoists lead the current democratic parliamentary system.) Unsurprisingly, some in Nepal have responded to another pending crisis — climate change — by calling for a “radical shift in the flow of finance” toward a more equitable distribution of money.

Survivors of the earthquake in Nepal sleep on a football pitch. (Photo by Kiran Bam)

But as a first guess, the current disaster in Nepal might result in a more equitable distribution of people. Labor conditions impel so many people to work abroad that very few Nepalese men fail to emigrate. “Here in Nepal, either you don’t get work or even if you get work the payment is very low,” a participant said in “a research study on migrant labor, “so we follow the tracks of other friends and neighbors and migrate to India.” (Disclosure: I am a co-author on this study, along with the colleague now sleeping at the sporting ground in Kathmandu.) At any one time, one in four Nepalese men is abroad, often working in India or the Middle East in the construction industry.

But construction is the job their country now needs them to perform. While Kathmandu’s monuments have attracted the most attention so far, thousands of other buildings in Kathmandu have also been damaged or destroyed. International aid currently focused on immediate human needs could shift toward longer-term solutions — and funding rebuilding may be a top priority. The men working in informal positions abroad might soon find opportunities back home.

If they do, building standards may change as well. Rapid urbanization in an impoverished nation is a suboptimal milieu for upholding safety standards, and commentators have noted the poor quality of many structures in the capital, a problem which resulted in excess mortality. Amid people frightened by aftershocks and bereaved of loved ones, the enforcement of up-to-date building codes could become highly popular — a move that NGOs have already been promoting.

For now, lasting changes in Nepal are difficult to identify from afar. But even as the death count is shifting higher and the living continue to struggle through nights in tent cities or the open air, lasting changes are already on their way. On Facebook, A Paradise Built in Hell author Rebecca Solnit offered a prayer of sorts about this shift: “May casualties be minimal. May rescues be swift and effective. May people be allowed the agency to take care of themselves and others and organize what comes next, as they so often have so beautifully in disasters around the world … ”

She added a worthwhile observation: “Even if all that happens as well as it possibly can, it’s still terrible.”