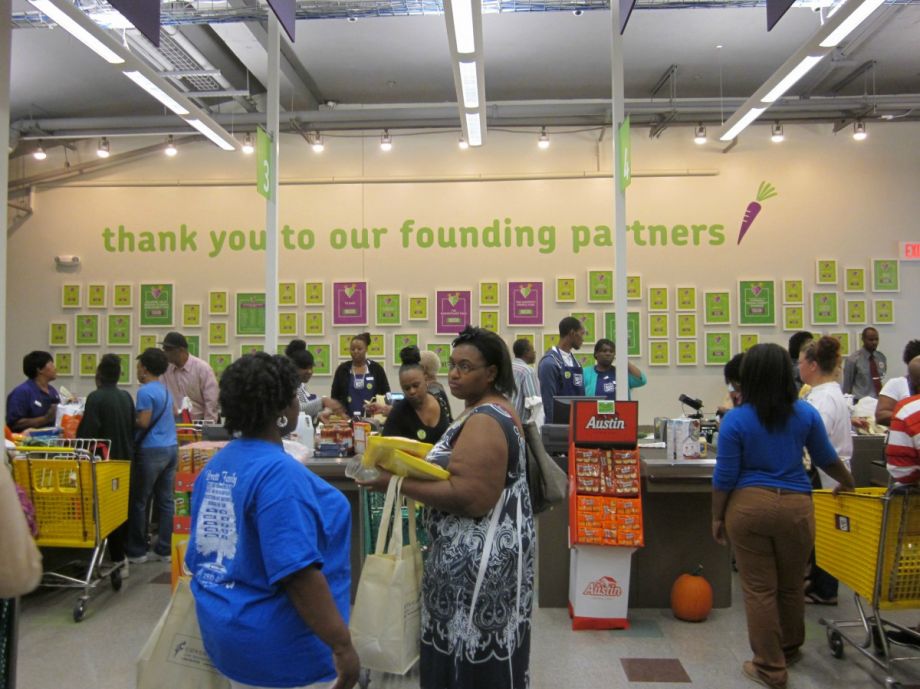 A growing crowd buzzes on a sun-soaked lot facing a brand new supermarket. Families weave around displays and free food giveaways. The Utz girl and Herr’s Chipmunk wave at them. Employees hand out free tote bags. Shoppers line up on both sides of the doors, awaiting the final remarks to conclude and the ribbon to be cut.

The market opens and people rush in. Outside, a DJ kicks up some music. Adults and kids start doing “The Wobble.” “Too crowded in there,” one woman says, shaking her head and entering a free hot dog line. “I live two blocks away, I’ll be back.”

It’s a lot of fanfare for a store opening, but with good reason: This is Fare & Square, the nation’s first non-profit supermarket, which opened in Chester, Pa. on Saturday. Chester, a USDA-designated food desert, had gone without a supermarket in town for 12 years. Around 200 people gathered for the ribbon cutting.

The new market comes courtesy of Philabundance, the Philly metro area’s largest food bank. While other non-profit grocery stores have popped up in cities in like Portland and St. Joseph, Mo., Fare & Square distinguishes itself as a 16,000 square-foot, full-scale market. The store is not a co-op, and there are no salary requirements for purchase or membership.

Food justice advocates are watching the Fare & Square model to see if it could become a solution to food deserts like Chester. With 34,000 residents, Chester’s median household income is $27,661, according to Census data. Nearly a third of its population lives below the poverty line.

“It has been very difficult to attract a traditional full-service grocer to the city of Chester,” says Patricia Smith, a senior policy advisor at The Reinvestment Fund, a CDFI that, among many other ventures, finances supermarkets. It backed a Fresh Grocer in North Philadelphia, ShopRites in South Jersey and West Baltimore, and now Fare & Square in Chester.

“A lot of times,” Smith says, “you’ll find that traditional full-service grocers want to site their stores where there’ll be a little bit more economic diversity and population density than you might find in a small city like Chester.”

The lack of supermarket in town led to high figures of retail leakage. According to Reinvestment Fund data, Chester residents — and those in the neighboring boroughs of Marcus Hook and Trainer — spend $36.5 million a year in grocery dollars outside of their communities. See the interactive map below:

Powered by www.policymap.com, an online mapping tool and data warehouse.
A map of Chester’s grocery retail leakage. Zoom out to compare with other cities in the region.

“This is a really emotional day for me,” Bill Clark, president and executive director of Philabundance, tells the crowd at the grand opening. He shares the bill with U.S. Rep. Bob Brady, state Sen. Dominic Pileggi and HUD Regional Administrator Jane C.W. Vincent, among others. By the time Clark reaches the microphone, lines dozens of people deep have already formed on either side of the supermarket doors.

“It feels exciting, and good, and quite frankly a little vulnerable,” Clark says a little later. “There’s no question: Whenever you talk to people in the commercial retail grocery store business, they will tell you that this is a tough business.”

Around 2007, Clark says, the organization noticed a rapid rise in the need for assistance. The number of donations leveled off, but demand did not (and hasn’t, Clark says, since the end of the recession.) The increased need put a strain on pantries and pushed Philabundance to pursue an alternate system. Commercial food deserts added another layer the problem: If there was no grocery store in town, the food bank could expect more visitors.

“We knew that Chester was a market in need,” Clark says. Philabundance was aware of the city government’s struggle to attract a commercial supermarket, but also “were simultaneously shipping around 1 million pounds of donated food into the many cupboards of the city of Chester.”

Clark and Dr. Martin Meloche, a food marketing professor at St. Joseph’s University, began to iron out the concept of a non-profit supermarket. Meloche connected with other academics while Philabundance got support from Giant and Wawa. The conceptual phase of finding the right model took about two years, Clark says.

Smith, of The Reinvestment Fund, considers the model groundbreaking. “You need a variety of formats to address a community’s needs,” she says. “It is a game changer. It’s not going to replace traditional full-service supermarkets or alternative food retailers like food co-ops and the like, but it would be another format.”

The last speaker, Chester Mayor John Linder, comes to the podium. “I know there’s going to be some haters when I tell you this,” Linder says, pulling out a card. “I have the official first membership to Fare & Square.” Linder reads aloud a proclamation, which Clark receives on behalf of the market’s board members. The two cut the ribbon together.

Inside, lines begin to form. Arlene Wilson waits, leaning over her cart. “I’d have to go out of town, out of the city, to get an onion,” she says. “So, I’m very excited.”

Judy Elder is carless and would take the bus to Shoprite in Eddystone, Pa. to go shopping. The 53-year-old would shop at Walmart and Giant, too, if she could catch a ride with friends. “But you know, they have other things to do, too,” she says, “I’d end up having to wait almost two weeks just get to the market.”

“Look at these lines,” says Jane C.W. Vincent, HUD’s regional director. “Now, they didn’t say this here, but their goal was originally to get 3,000 new members to set up. People said they couldn’t do it. Before today started, they were at 4,732.”

In May, the Pittsburgh Post-Gazette reported that Greater Pittsburgh Community Food Bank was planning a similar project, and would visit non-profit groceries, including one in Philadelphia, as it creates a business plan. Clark confirms that Philabundance is expecting a delegation from Greater Pittsburgh. When asked when Philabundance might open its next supermarket, Clark says, “Well, we all say, let’s take it one day at a time.”