Will National Treasure Designation Save Portland’s Modernist Arena? – Next City 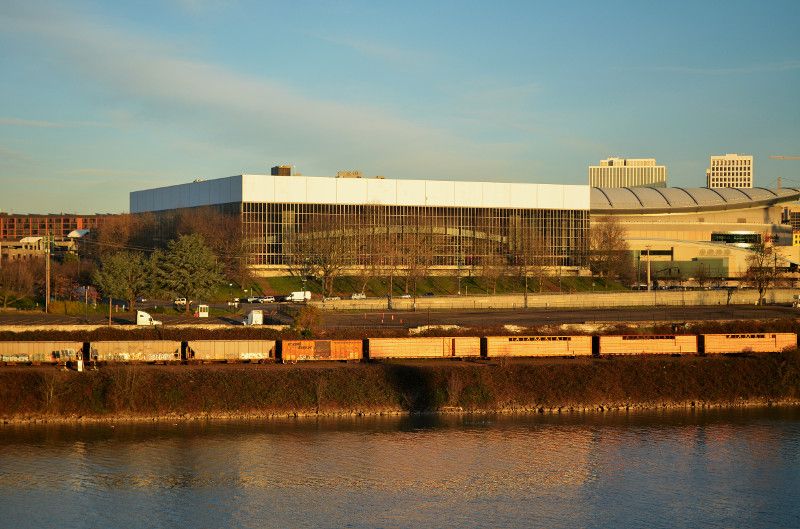 Earlier this month, the nonprofit National Trust for Historic Preservation named Portland’s Veterans Memorial Coliseum a National Treasure, a designation both local officials and supporters of the modernist arena hope will lead to a decision about the building’s future. Financed by an $8 million voter-approved bond and completed in 1960, the arena has suffered from deferred maintenance ever since.

Demolition has been threatened and avoided before, and in 2015 the Oregon city undertook an options study for the site. But the biggest threat to the arena’s future is the building itself: Its amenities are out of date, particularly compared to the new Moda Center next door, and a lack of ongoing care has imperiled even the signature design features that make it architecturally compelling. With the new designation, the National Trust will work with stakeholders to come up with a financially viable plan to keep the coliseum standing, one that will almost certainly include asking the taxpayers to open their wallets again.

“Over time the offerings of the Portland coliseum are further and further out of step with what contemporary audiences, contemporary users expect from an arena,” says Anthony Veerkamp, field director for the National Trust. The coliseum “has not received the ongoing reinvestment that any facility, public or private, requires to remain vital and viable,” he continued. “And in this case it’s a facility that needs to compete in the market place, it needs to attract users. It does so, but doesn’t do so at the clip necessary anymore to consistently operate in the black.”

The arena still attracts over 400,000 visitors a year for events ranging from the Portland Winterhawks’ hockey games to talks by President Barack Obama and the Dalai Lama to nearly every regional high schools’ graduation ceremony. But after the new, privately owned Moda Center was constructed next door in 1995, attracting the Portland Trail Blazers NBA team away from the older venue, “it was unclear what the future for the Coliseum would be,” says Susan Gibson-Hartnett, manager of Portland’s spectator facilities.

What is clear is that the Veterans Memorial Coliseum boasts a unique design, a technological feat of its era. Brian Libby, a Portland architecture writer who supports preserving the building, has called it an example of “timeless mid-century modern architecture.” The building’s four walls are made entirely of glass, and the whole structure is supported by just four concrete columns at the corners, creating an open interior. The arena itself is a concrete bowl, detached from the outer structure, which allows spectators a 360-degree view of the city beyond the glass walls. 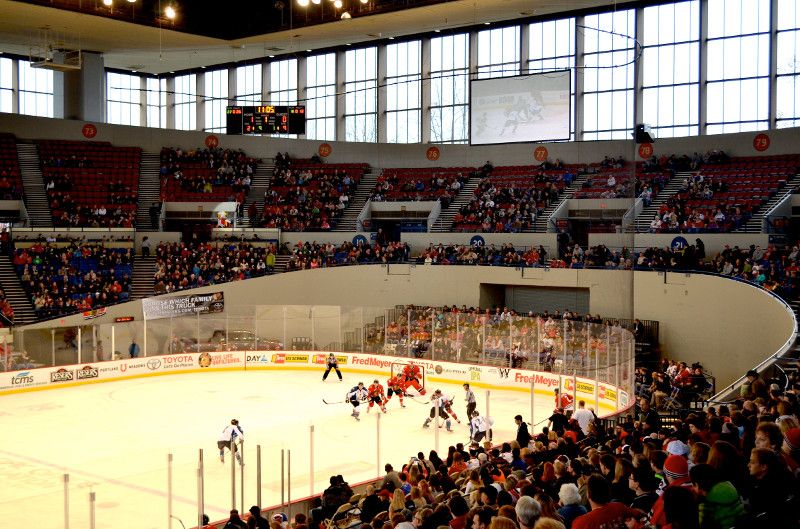 But there’s a catch. A curtain can be raised from the arena to the ceiling to darken the space for performances, but the mechanism is so antiquated that the operators leave the curtain in place most of the time, lest it actually stop working. Thus few contemporary users have experienced the feature that is so uniquely Portland, says Veerkamp — bringing the outdoors into a traditionally shuttered space.

The curtains are not all. The basic amenities are outdated, from the restrooms to the scoreboard to the concession stands, which lack the vents that would allow vendors to cook onsite. The loading dock is built such that everything has to be unloaded manually, which dramatically increases time and labor costs for anyone who wants to put on a performance at the arena. The seats are too cramped because there are too many of them, more than necessary to meet the market need.

Veerkamp says that’s actually a good thing, because all of these updates — including making the arena ADA compliant — would require reducing the number of seats, from 12,000 to around 7,000. A study undertaken last year looked at the implications of a range of possible modes of action: continued current operations, demolition and five renovation options, ranging from essential repairs to robust enhancements that would more fundamentally alter the building’s character and design.

Veerkamp says whatever course of action is taken on the building probably won’t look exactly like any of those proposals, but will mix and match from the possible upgrades. The report did not make any specific recommendations, but does suggest a price range: between $60 million and $90 million to make the building more amenable to use without dramatically changing it. The same report estimated that undertaking the lower tier upgrades necessary to result new tenants and improve user experience would result in annual operating costs of between $250,000 and $500,000. Over a 30-year life span the upgrades could allow the facility to generate an $1.4 billion economic benefit, 430 full-time jobs and job earnings of $706 million.

But revenue still wouldn’t cover the costs of rehabilitation. The facility would be able to operate at a profit without additional subsidy, but public dollars would still be needed to cover its renovations. Gibson-Hartnett says there does seem to be public appreciation for the building, but Portland residents have not formally been asked yet whether they’d be willing to foot the bill. The conversation has been raised so many times without action, she suspects they’re fatigued.

But there’s a cost to doing nothing too. Right now the Veterans Memorial Coliseum draws an average of $600,000 more from the city’s Spectator Venues and Visitor Activities Fund than the venue contributes to it. The report notes that the risk of a major equipment or building system failure only continues to rise without the needed repairs. If that happens, and the coliseum has to close unexpectedly for a season or more, Veerkamp warns the facility may never attract clientele back.

Some have proposed razing the site to build more affordable housing, but demolition doesn’t come free either — an estimated $14 million. Both Veerkamp and Gibson-Hartnett say it’s not a particularly appropriate option for a city that prides itself on sustainability. Plus, the venue’s connection to the veterans memorial — two black granite walls near the entrance inscribed with the names of the dead — makes demolition politically unpalatable.

“There is no good option here. There’s no cheap option. There’s no option that will make a lot of people happy. Any of the options to reinvest in the building are going to take a heavy political lift,” says Gibson-Hartnett.

Unclear what difference the National Trust designation will make, Gibson-Hartnett says her first question of the nonprofit was whether they’d be bringing a $60 million check. They aren’t, but they will work to get leadership on board. Ultimately, the decision is up to the mayor and council, who need to be convinced that rehabilitation is the right choice, economically and culturally. Then there are the taxpayers.

“Typically it’s a lot easier both to ask taxpayers, if it’s a bond or something, it’s easier to get funding for a new vision than to invest in a current asset. It’s not uncommon at all with historic resources that they’re really let go,” says Veerkamp. “Then you’re frequently at the risk where the resources become unloved, because people have never seen it at its best.”