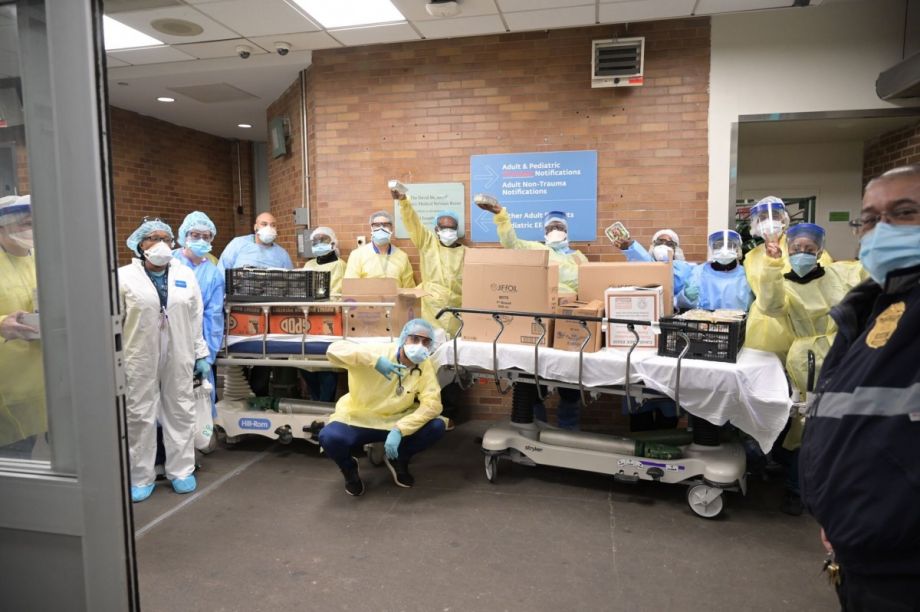 It’d be an understatement to say things moved quickly for Frontline Foods PDX, a grassroots initiative pairing donors, local restaurants and hospitals to provide meals for frontline care workers out of Portland, Oregon. Two weeks ago resident Nick Cain came across a Medium post detailing how San Francisco residents coordinated meal deliveries between restaurants and hospitals. It was written as an open-source model, encouraging readers to start similar initiatives in their own cities.

So Cain did, sending his first email outreach to friends the morning of Tuesday, March 24th. By the end of the week, he partnered with Portland resident Peter Hansen who had started a similar initiative and teamed up with Frontline Foods, an umbrella organization formed to coordinate similar efforts across the country. By the week of March 30th, Frontline Foods PDX had the support of World Central Kitchen — a nonprofit founded by chef José Andrés — and had raised over $37,000 and delivered 500 meals.

“This is not a rocket-science idea,” Cain says of the effort: encouraging donations to purchase meals from local restaurants that have lost significant business due to COVID-19, which then deliver those meals to participating hospitals.

What is significant is that from an explosion of grassroots efforts around the country, a national framework has rapidly developed to support them, standardize safety protocols and scale deliveries to feed a growing number of medical centers, particularly the least-resourced.

Early “Feed the Frontline” initiatives mostly have informal beginnings. In San Francisco, coordinators kept the framework as simple as possible, starting a Google form where donors could pledge $1,000 to feed 50 healthcare workers, paying Venmo, CashApp or PayPal to restaurants directly.

In Boston, Pamela Carthy, owner of Penguin Pizza, got a Friday night call from a customer ordering 10 pizzas to be delivered to the Brigham and Women’s Hospital down the street. Carthy posted about it on Facebook, prompting similar orders. “We keep going,” she says. “It’s not as much about making money as it is about serving the community and keeping staff employed.”

Carthy’s friend, Boston resident Alex Nicholson, then started the Feeding the Frontline website to offer an open-source model for the efforts to be duplicated, much like San Francisco organizers had done. “It’s super grassroots, I’m focused only on giving restaurants the information and framework they need to make the best decisions for themselves,” Nicholson says.

She notes the effort is now manifesting in two ways: “the first is a grassroots movement similar to what we are doing, where the focus is one-to-one, restaurant to hospital to customer.” This involves restaurants that cannot shift the entire business model to hospital delivery, but do accept payment to deliver meals to frontline workers. “The second model, which is scaling quickly,” Nicholson says, “Is around donating regionally with local restaurants shifting their model to offer deliveries at scale to hospitals.”

This second model is facilitated by a partnership between national organization Frontline Foods and World Central Kitchen, who are reaching out to local initiatives to provide support. In Portland, the partnership has provided a more effective fundraising vehicle, according to Cain. “It’s enabling us to capture donor dollars that are tax deductible through a 501(c)(3),” he says. “We were asking people to pledge [a minimum of $500] and they could pay the restaurant in cash … now anyone can donate any amount of money they’re inclined to donate.”

Having an umbrella organization is important for challenges ahead, including safety protocol for restaurant workers and hospital deliveries, food sanitation and wage sustainability for kitchen staff.

Off Their Plate, another initiative out of Boston, is taking the lead on setting those standards. This grassroots effort, started by Harvard Medical student Natalie Guo, became a larger partnership with Boston chefs Tracy Chang and Ken Oringer and then went national. A partnership with World Central Kitchen has provided donations with tax deductible 501(c)(3) status.

“What we have realized is we want to have some level of ownership and accountability for the safety of workers who come into work during this crisis and for the sanitation for preparation and delivery of food to frontline workers,” Guo says. “In order to do that we need tight-knit relationships.”

Their team is working closely with chefs around the country and World Central Kitchen to develop a standard operating procedure. The plan is to publish it and “share as much as possible,” according to Guo.

The team is also prioritizing how the money coming into restaurants is supporting staff, particularly staff who will not or cannot receive unemployment benefits. “Many of our restaurant partners are donating some, if not all, of their overhead so more of the proceeds can go to wages,” says Guo.

Finally, Off Their Plate is conducting a needs assessment in Boston to identify the frontlines of COVID-19 alongside the least-resourced medical centers and workers. “We look at food access, where cafeterias have shut down in healthcare centers, where eateries have shut down, the medium income per zip code, and the federally-qualified health centers that serve the Medicaid and under-insured population,” Guo says. Off Their Plate also partnered with Boston Healthcare for the Homeless to feed its 12-person healthcare staff.

Many of the Feed the Frontline initiatives have partnered with large name-brand hospitals, Guo notes, and she wants to be sure the national framework being developed prioritizes smaller, less-resourced medical centers. Cain, in Portland, also says the team has equity in mind and increased its restaurant outreach to women and minority-owned businesses.

Given the collaborative and open-source nature of this work so far, it’s likely their larger ambitions will inspire others. “The reasons this is taking off are for reasons super apparent — this is a once-in-a-lifetime crisis,” Cain says. “It’s a way we can keep the culture and fabric of our city, which restaurants help provide, and in doing so show appreciation for people working under incredible stress,” he adds. “There’s a reason I’m not the only one who was compelled into action.”