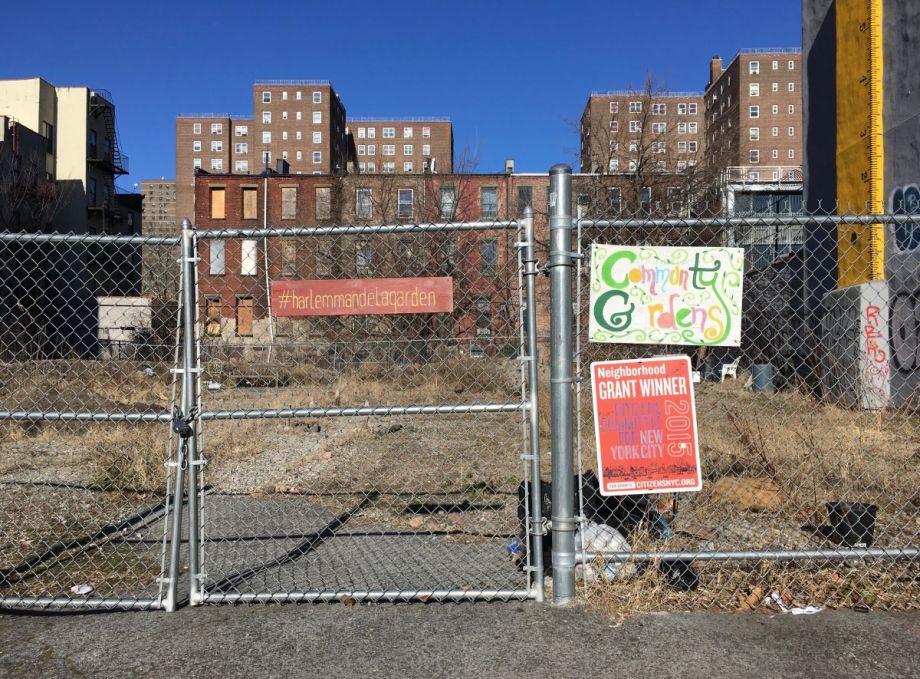 A lot at West 126th Street in Harlem, currently in use as a community garden but now slated for development

Competing priorities are a way of life in most cities, and that can get messy.

For example, New York City wants more affordable housing. It has also invested time, money and even political capital to support diversity among the people building that housing.

Yet the affordability of that housing is also coming under fire, as it routinely isn’t obtainable by the most vulnerable residents in the city. The city is giving away public land to developers and subsidizing financing to build what it calls affordable housing, often in place of community gardens and other open space. Meanwhile there are thousands, perhaps tens of thousands of lost or forgotten opportunities to restore or preserve existing affordable housing around the city.

These competing priorities are on display at 263-267 West 126th Street in Harlem, where a treasured community garden is slated for development by a minority-owned firm.

Kenneth Morrison was born and raised in the Bronx, but has worked in Harlem most of his adult life. He started working at Lemor Realty, his father’s Harlem-based real estate company, in 1988. Morrison started out as a broker, doing real estate sales, but the market was slow at the time. Nobody wanted to buy. Decades of redlining and underinvestment hit Harlem hard in the 1980s, and then came the crack epidemic. From 1989-1990, the five Harlem and East Harlem ZIP codes were all among the top 10 of 168 ZIP codes citywide for substance abuse admissions to hospitals.

To stay afloat, Lemor Realty got into property management. They took on contracts with NYC’s famous affordable housing co-ops, which are all over the city but unusually common in Harlem and other parts of northern Manhattan. Lemor Realty also became a 7A administrator, one of many court-appointed property management companies that would take over for absentee landlords who had essentially abandoned buildings, resulting in building conditions that are dangerous to tenants. 7A administrators would come in on a court order to collect rent and even take out debt in order to make necessary repairs, like replacing heating and hot water systems or putting on a new roof.

In the mid-1990s, Lemor Realty joined the Neighborhood Entrepreneurs Program, run by the Department of Housing Preservation and Development (HPD). In this program, the city worked with smaller real estate companies, transferring buildings into their ownership that were previously foreclosed on or in need of a gut rehabilitation, sometimes vacant and sometimes not.

“They were looking for small, locally based developers in the same neighborhoods where the buildings were,” Morrison says. The goal was to provide new opportunities to companies that owned little to no property at the time.

The Neighborhood Entrepreneurs Program transformed Lemor Realty. “That was our first foray into development,” Morrison says. From owning about 30 units, they went to owning hundreds. Today, Lemor Realty manages a portfolio of around 950 units, most of which it owns. Though his father has since died, the firm is still based in Harlem.

Morrison’s winning proposal for the West 126th Street site would be the first totally new construction Lemor Realty has ever done.

It took state legislation back in 2014 to gain permission for HPD to set aside sites for development by MWBE firms. The bill was part of broader efforts to confront the fact that white-owned and -operated firms dominate NYC real estate. According to an Equal Employment Opportunity Commission Survey, The Real Deal reported, whites hold 74 percent of the city’s professional real estate roles, including 86 percent of senior leadership roles.

“Being able to create a dedicated pipeline would not only help the agency and its goals, but also the city’s goals to increase opportunity and get more participants in our development projects that are more representative of the communities we broadly serve,” says Baaba Halm, HPD’s assistant commissioner for economic opportunity and regulatory compliance.

The bill to carve out properties for MWBE-only development complemented those classes — all of the six winning proposal teams from last month’s announcement participated in at least some of the capacity-building classes. The winning teams have also been invited back to help teach a new set of classes coming up in the fall.

In picking the six sites for a dedicated MWBE development pipeline, HPD received feedback from MWBE developers that they needed to focus on smaller sites than usual when HPD transfers city-owned land to developers. Typically, the city likes to maximize the number of units created on city-owned land. A city-owned site in East Harlem, currently in use as a set of community gardens, had a recent request for proposals to build upward of 655 units. For firms like Lemor Realty, which has never done new construction before, that scale is simply out of reach at this point. They’ve never had to assemble the subcontractors and financing needed to build any kind of new construction, let alone one that large.

HPD hopes that giving MWBE developers a set of smaller sites to develop from the ground up now would help set them up to do larger projects later. So the six sites needed to have square footage and zoning for between 20 and 80 units, according to Eunice Suh, HPD’s assistant commissioner for planning and predevelopment. Suh also says they wanted geographic diversity in the sites: three are in Brooklyn, two are in the Bronx and one is in Manhattan. They also needed to be vacant lots, to give MWBE firms the opportunity to do new construction. These criteria narrowed down the sites to just a relative few throughout the city, and the spot at 126th Street in Harlem fit right in the mold, zoned for 29 units.

The housing affordability levels are set within the constraints of HPD’s various term sheets for its subsidized financing. The Harlem MWBE developer team selected the Neighborhood Construction Program (NCP) term sheet, which generally provides a 30-year, 1 percent interest loan for up to 90 percent of total development costs, plus a subsidy of up to $100,000 in grant dollars per housing unit for buildings that have rents set to be affordable anywhere from 30 percent AMI to 165 percent AMI.

Median income in Harlem, however, is around $36,000. So despite subsidized, low-cost public financing from HPD, and a transfer of the land to the developer for just $1, the building as currently planned is not serving the lower half of households by income in Harlem.

In Harlem, Rene Calvo isn’t buying it, no matter how affordable the building may or may not be in the end. The owner and operator of Harlem Flophouse, whose grandfather formerly ran a bodega in East Harlem, wants to know why the city is moving forward with building on this particular site while there are an estimated 2,300 or so vacant units in public housing due to disrepair, and another estimated 1,100 vacant buildings throughout the city that could be made available for affordable housing development.

He also points to the city’s continued tax lien sales, in which the city sells outstanding property tax or water and sewage debt to investors. Many of these properties end up settling debts by selling themselves to the investors who buy the debt, often jeopardizing their status as affordable housing. Calvo says instead of selling debt to investors, the city could use the debt as leverage to bring properties into permanent affordable housing status.

“Explain to me how this is benefiting the community,” says Calvo. “Really, explain to me how it’s justified to give away publicly owned land to a developer to build housing for rich people. Justify that to me, and I’ll go away.”

Calvo organized several hundred signatures from community members back in 2014 to create the Mandela Community Garden at the same 126th Street site now targeted for development. As with all new community gardens, Calvo and his fellow organizers promised HPD initially that it would be an interim garden. The group invested about a year of work de-paving the lot by hand, using all volunteer labor. Their hope was that it could someday become permanent. It wasn’t exactly a pipe dream; at the end of 2015, the city announced 34 “interim” community gardens had been transferred to the Parks Department, giving them permanent status. Mandela Garden didn’t make the cut at the time, but Calvo has no plans to give up the garden without a fight.

Mandela Community Garden organizers, HPD and the developer team have time to hash things out. As with all transfers of city-owned land to developers, the site will have to undergo the various steps and pre-steps for the city’s Universal Land Use Review Procedure or ULURP (you-lurp), as it’s known. The whole thing, including a pre-ULURP environmental impact study, could take up to two years from now before any breaking ground can occur.

Morrison says his staff have considered working with the garden organizers to preserve some ground-floor space for the garden, but have not yet reached out, leaving the task of working out the details with Calvo and others to HPD for now. Under the city’s ULURP process, the person with the final say in the matter is effectively the local council member, Bill Perkins, who was just elected in a special election to replace predecessor Inez Dickens (who was elected to New York’s State Assembly in November).

Calvo held a meeting last week at Harlem Flophouse to strategize how to reach out to the council member, who held the seat previously from 1998 to 2005.

“If you’ve noticed there’s been a dramatic change in the political environment,” Calvo says. “All levels of government are being challenged as to what their true affiliations are.”