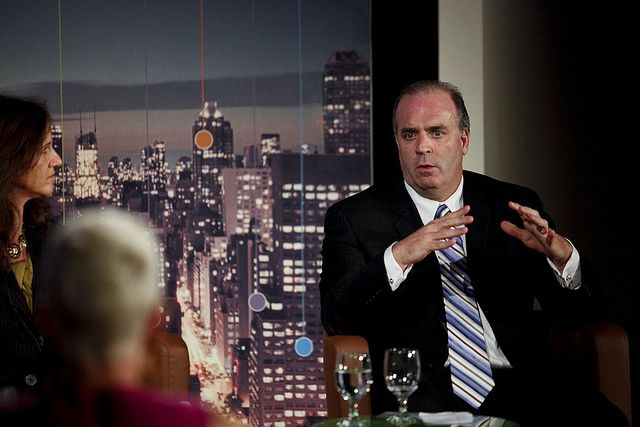 Dan Kildee, former county treasurer of auto-industry-decimated Flint, Mich., is running for Congress. Kildee, a Democrat and co-founder of the Center for Community Progress, is best known for embracing the somewhat uncomfortable idea that the old joke about the last one out of Detroit should turn out the lights is actually smart policy.

As county treasurer in Flint, and then as a president of the Center for Community Progress — which is today winding down its annual conference in New Orleans — Kildee advanced the notion of planned shrinkage. In plain terms, this means instead of watching abandoned houses and factories molder, tear them down, move out the neighbors and maybe plant some trees where previously the neighborhood had stood. Under this theory of urban revitalization, declining neighborhoods that suck up city resources but generate little tax revenue would be demolished and the land turned into green space, or land-banked as a publicly owned asset until there is market demand for it.

“Decline in Flint is like gravity, a fact of life. We need to control it instead of letting it control us,” Kildee told the New York Times in 2009.

As communities nationwide confront foreclosure-racked neighborhoods and swelling deficits, the idea has gained traction, though it has yet to be executed in a large-scale manner because of its obvious political difficulties.

In New Orleans, for instance, the idea was met with violent opposition when floated by post-Katrina planners as a solution for neighborhoods, such as the Lower 9th Ward, that had lost most of their infrastructure, housing and population to the failure of the federal levees. Nearly seven years later, the concept of shrinkage is rarely broached publicly, yet quietly remains at the heart of many planning and investment decisions made by the city.

It’s obvious that urban footprints must adapt to changed economic realities. Now, what would it mean if a man who has dedicated his career to thinking about how to do it went to Congress?

Speaking Thursday at his organization’s Reclaiming Vacant Properties conference, Kildee said that while he could not speak as a candidate only as “the on-leave president of Center for Community Progress,” he believes that the first thing the federal government must do is force localities to modernize foreclosure statutes so to reduce foreclosure rates and to make it easier for communities to bank land. The method: Incentivizing reform through grant programs and making funding streams conditional on the basis of reform.

“The federal government ought not be neutral on the issue of state and local issues when the federal government invests enormous amounts of money into these local issues,” Kildee said. “Like Secretary of Education Arne Duncan, who has encouraged reform by making federal support of education contingent on mondernizing antiquated systems and binging them up to date, federal support might be conditional to cities and state and counties not using 19th-cenury tax collection systems.”

The man from Flint went on: “We could have a federal government that says ‘we will not continue to give you fuel for your Model-T Ford method of tax collection.’”