Moving From Moped to Metro Transit – Next City

Moving From Moped to Metro Transit 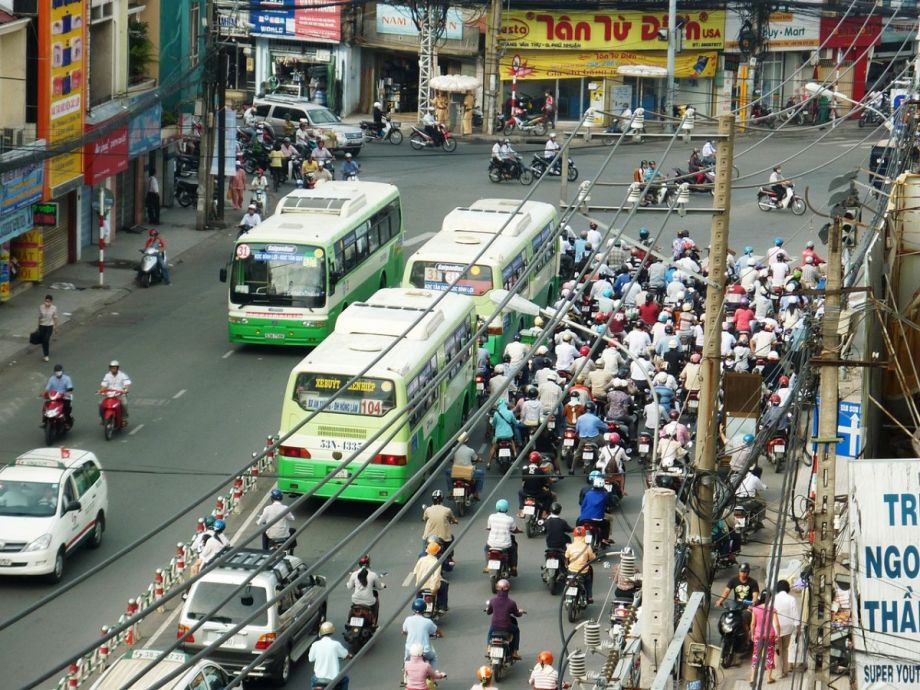 Ho Chi Minh City is investing in the largest transportation project that Vietnam has seen to date — with more than half a million dollars. And there’s a good reason, according to a new Siemens report, “Resilient Urban Mobility,” that looks at resilient cities around the world and focuses on Ho Chi Minh City as a case study.

Vietnam’s largest city is facing the effects of climate change, such as rising waters, and a growing population. Already with a population of 10 million, the city is expanding steadily, up to 6 percent annually. Couple that with its unique location — 45 percent of the city is less than a meter above sea level and the other 65 percent is perched in a flood plain — and the need for a clear vision for resiliency is plain.

Over the last 60 years, Ho Chi Minh City has seen 12 large tropical storms — and they’re not stopping. Yet, its residents fearlessly drive mopeds through flooded streets. Motorcycles and mopeds make up 85 percent of the vehicles on the road. Cars are mostly for the elite and privileged, but they’re slowly encroaching too.

Siemens reports that the combined impact of flood damage, clogged streets, traffic delays and weak infrastructure could cost the city $97 billion between 2015 and 2045.

To lure Ho Chi Minh City residents away from personal modes of transit, the city is building a more modern transportation infrastructure. When the project is complete, Ho Chi Minh City will have six metro rail lines (also referred to as the MRT system), three light rail lines, and a bus rapid transit (BRT) system, moving the seven million people who live in its center, and 10 million on the fringe. The first MRT began construction in 2012 and is scheduled to open in 2018.

The resilience-minded project includes an inter-operator fare-collecting system (similar to London’s Oyster Card or Switzerland’s Swiss Pass, which let travelers access all modes of transport with an all-access pass), and an integrated traffic management system (ITMS).

The integrated traffic system — surveillance cameras, traffic signals, sensors, messaging signs and more — will cost the city $299 million initially. Add that to the inter-operator fare system, and the bill could be around $700 million. However, Siemens estimates that the benefits of this system will override the costs in the long run: Such an investment could mean $1.6 billion in savings.

Initial funding will come through public-private partnerships. Contributors include multilateral institutions like the World Bank, the Asian Development Bank, and the Japanese International Cooperation Agency. (Of course, there are challenges with having so many donors: Funds could trickle in at different times; different donors have different agendas and timelines; and materials provided by contractors from around the world may not be compatible with each other. A single control center would be needed to orchestrate all this.)

Siemens reports that car users are likely to rise tenfold by 2050 in Ho Chi Minh City. They’re also going to be the primary beneficiaries of a more efficient transportation system. Thus, targeting car owners and drivers could be the best source of income.

To pull this off, city leaders will need to work together, sharing data across participating agencies. As the project comes together, the Siemens report emphasizes, technologies need to follow common standards and protocol. Furthermore, technologies that are built abroad will need to be explained to local operators to ensure maintenance and sustainability.

While this may seem like a daunting list of challenges, Ho Chi Minh City the benefits of a new and improved transportation system will be greater. The city will reduce its carbon footprint (by putting more people on trains), and decrease the congestion of mopeds and cars on its roads. With less time spent waiting in traffic, residents can be more productive. Plus, with fewer passengers on the road, safety for all travelers is likely to increase. In fact, Siemens estimates that this new system, with both ITMS and inter-operator ticketing, would add up to $2 billion in value over 30 years for the city.