Most Cities Still Pretty Scatterbrained About Food Trucks – Next City 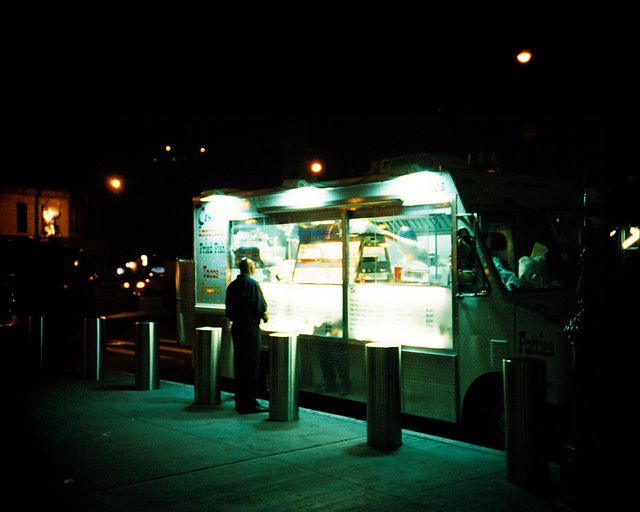 Food trucks are businesses, too. And while they will never be a main economic engine — they don’t create as many jobs as their brick-and-mortar counterparts, for instance — they do pay taxes and fees. There’s no reason that cities, especially those with space to accommodate, should be averse to more falafel or artisanal cupcake trucks.

A new study from the National League of Cities examines the mobile vending industry’s impact on cities and how all the stakeholders — the city, residents, food trucks, brick-and-mortar restaurants — can work together effectively for a more robust economy.

“Food on Wheels: Mobile Vending Goes Mainstream” examines 13 different cities, from New Orleans to Denver, with food truck regulations. New York and San Francisco are notably absent, and with good reason: The authors felt that any conclusions drawn from those two cities would not be applicable elsewhere.

The study’s most glaring finding is the complicated permitting process. Most cities use three to five departments just to vet a prospective vendor, and that’s before owners have to figure out where they can park and sell their food. We all know the government loves red tape, but it doesn’t have to be this way.

Take Austin and Cincinnati, each of which have a one-stop shop for obtaining a permit. Austin is light-years ahead of most municipal governments and has all the requirements listed on its website. (What a novel idea!) That means there won’t be multiple trips to the health department or City Hall only to find out you don’t have the right documents. Everything is out in the open.

And it’s working. “In 2012 there were about 12 trucks,” said Elizabeth Romero, a board member of the Cincinnati Food Truck Alliance and owner of the SugarSnap! Truck. “And then this year there are over 30 trucks.” The Alliance was formed just after the new system went into place to give food truck owners a more unified voice when dealing with City Council. Some might chalk up the new trucks to popularity and acceptance, but there’s no denying that a smoother permitting process encourages would-be vendors.

Enthusiasts like to talk, sometimes nearsightedly, about how their vegan donut truck can help revitalize a neighborhood. And while food trucks aren’t going to save depopulated or more blighted parts of town, they certainly can contribute to the kind of vibrancy that brings in more investment. There’s no reason municipalities should be so arcane and scatterbrained about the permitting process. And besides, if that taco truck is successful, it just might open a job-generating restaurant someday.

Food trucks generate about $650 million annually, and the industry is expected to account for $2.7 billion over the next five years. It’s time to quit acting like they’re vanity projects or just a nuisance on the side of the street.