Moscow Ramps Up Spending on Metro Expansion – Next City 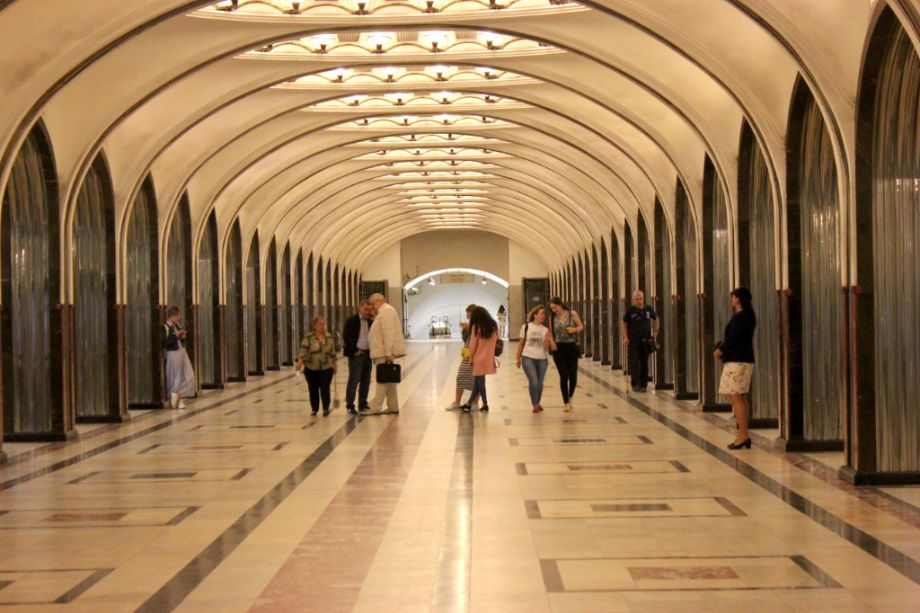 A station in the Moscow Metro (Photo by Rictor Norton & David Allen / CC BY 2.0)

Over the nine-year period that began in 2011 and ends Dec. 31, Moscow has spent a total of 1.031 trillion rubles (US$16.12 billion) adding new lines and extensions to its famed metro system. Now Metro Report International reports that the Russian capital plans to spend 70 percent of that amount on projects to be finished in the coming three years.

Moscow city officials have announced that the city will spend about 700 billion rubles (US$10.95 billion) on metro projects between 2020 and 2022, with the bulk of the amount going towards system expansion.

The biggest of the expansion projects will be completion of a new outer ring route, Line 11. Currently the line runs 3.3 km (2.05 miles) between Kashirskaya and Kakhovskaya. Construction of the entire 69-km (42.9-mile) line has passed the halfway point, and the remainder of the line is slated to be finished in this investment cycle. This figure also includes a branch from Khoroshyovskaya to Delovoy Tsentr that will ultimately become part of Line 15 when that line opens in 2025.

The other extensions to be funded in this cycle include a 3.7-km (2.3-mile) tunnel between Delovoy Tsentr and Tretyakovskaya that will turn current lines 8 and 8a into a single continuous route, a southward extension of Line 1 to Novomoskovskaya and a northward one of Line 10 to Fiztekh. Also planned for the longer term: an extension of Line 8 to Vnukovo Airport.

The projects slated for completion by 2023 will add 40 new stations to the system, with an additional 18 planned for the longer term. As of now, the Moscow Metro system has 397.3 km (246.9 miles) of routes and 232 stations, making it the fifth-most-extensive metro system in the world. A monorail and a separate elevated ring line integrated with the metro add 58.7 km (36.5 miles) of route and 37 stations to the network.

Oklahoma Cityans to Vote on Another Round of Transit Improvements

Ever since Oklahoma City officials were surprised in the late 1980s when an airline decided not to build a maintenance base there because its employees didn’t want to live in the city, Oklahoma’s capital and largest city has invested hundreds of millions of dollars in a slew of projects known by the acronym MAPS (originally “Metropolitan Area Projects”) designed to improve the quality of life and the physical and transportation infrastructure of the city.

A good chunk of that money has gone to giving the city a transit system — branded EMBARK in 2014 — that now operates in the evening and on weekends. Some of it went towards the construction of the city’s modern streetcar routes. All of these improvements have been paid for by temporary one-cent sales taxes that expire after a period of years. To date, when one tax expires, the city has sent another list of projects to voters for funding by that one-cent tax.

Currently, the tax pays for street improvements and bike infrastructure as part of an initiative called “Better Streets, Safer City.” It’s set to expire at the end of March 2020.

Which means that it’s time for another round of projects.

According to a report in The Oklahoman, the MAPS 4 projects voters will be asked to fund Dec. 10 include further improvements to Oklahoma City’s transit service. About $87 million of the estimated $978 million the one-cent sales tax extension will raise over the next eight years will go toward transit projects.

The largest of the projects will add two more bus rapid transit routes to the one that has already been funded and is under design. The two new routes would serve the northwestern and southern parts of the city with raised-platform boarding similar to the streetcar stations, signal priority and dedicated lanes in some areas. Total price tag: $60 million.

The other $27 million will go towards additional buses for the EMBARK transit system, signal priority for buses at about half of the 490 signalized intersections along EMBARK routes, 500 new accessible transit shelters with security lighting, and security lighting for the bus stops without shelters. With the addition of the 500 new shelters, about half the system’s 1,400 bus stops would have shelters if voters approve the sales tax extension.

So far, voters have approved every extension of this tax.

The 6.7-km (4.2-mile), 14-station line connects with the existing line T1 at Debourg and runs eastward from there to Est-Pinel Hospital. It serves the southern and eastern parts of Lyon, bypassing the city center.

About 70 percent of the route operates in a grass median, providing additional greenery in parts of the city.

This past May, officials of Sytral, Lyon’s transit authority, held a series of public consultations on a proposal to extend this line northwest to La Doua and the University of Lyon 1 campus. The extension would turn the line into a belt route around the city to the south and east.