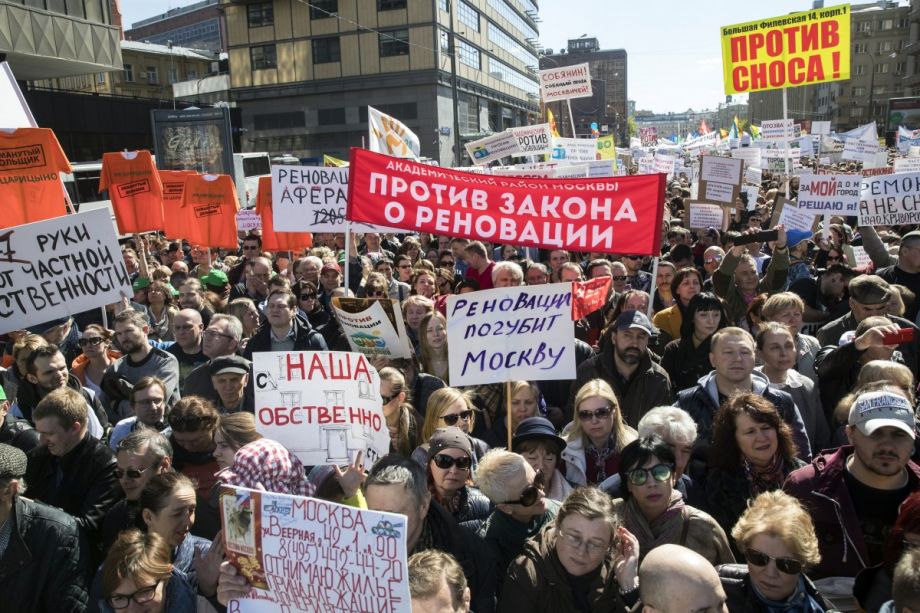 Thousands of protesters took to the streets of Moscow on Sunday to rally against the proposed teardown of Soviet-era low-rise apartment buildings. (AP Photo/Pavel Golovkin)

After thousands of protesters took to Moscow streets Sunday to rally against a bill that would allow entire neighborhoods to be torn down, the local government seems to be slowing down its plan, ABC News reports.

The bill calls for 5,000 Soviet-era apartment buildings — built in the 1950s and 1960s to tackle a housing crisis — to be demolished in the next several years to make way for new development. According to The New York Times, the buildings are home to about 1.6 million people, or more than 10 percent of the Russian capital’s population.

The plans for the massive teardown are vague, but the general idea is that owners would abandon their apartments on the promise that the city would build them something better. While Mayor Sergey Sobyanin has insisted that residents would be offered housing of an equal size in the same neighborhoods, the draft law only guarantees an apartment of exactly the same size. Many residents worry that their quiet, leafy neighborhoods will give way to high-rises, or that they’ll be pushed to the city’s outskirts.

While many of the apartments have not aged well — and the smallest are only about 300 square feet — the Times described why residents are still attached to their neighborhoods: “The district feels like a verdant oasis despite being surrounded by boulevards throbbing with traffic. Trees planted when the buildings went up now shade benches and playgrounds.”

Many activists also say the move is just a way to enrich developers. Backing up their claim: The demo would include buildings that are still in good condition in what have recently become desirable, expensive neighborhoods, and ignore some of the city’s most dilapidated housing in less attractive neighborhoods.

Sobyanin and City Hall seem rattled by the public outcry against the bill, according to ABC, and the mayor suggested the parliament postpone its vote on the law until July.

Protesters carried the flags of their neighborhoods and signs reading “We are not serfs,” “No to the demolition of the constitution!” and “Renovate the government!” While police estimated the protesting crowd as low as 5,000, an independent group that provides crowd tallies said just over 20,000 people showed up, and protest organizers said up to 30,000 people attended. The Times said the demonstration was organized mainly by women and “galvanized people who described themselves as previously apathetic.”

The debate signals a larger conflict over the socioeconomic effects of Moscow’s rapid modernization. In an op-ed for Next City last year, Mirjam Büdenbender and Daniela Zupan wrote that urban planning in Moscow needs to be rebalanced.

“This requires, first of all, a profound shift from favoring certain segments of the population (middle and upper classes) toward providing equal conditions for all people,” they wrote. “This involves cutting back spending on the beautification and aesthetization of central Moscow. Instead the city should invest in less sexy but important services such as public healthcare, education, rental housing and job creation, primarily in Moscow’s outlying neighborhoods.”