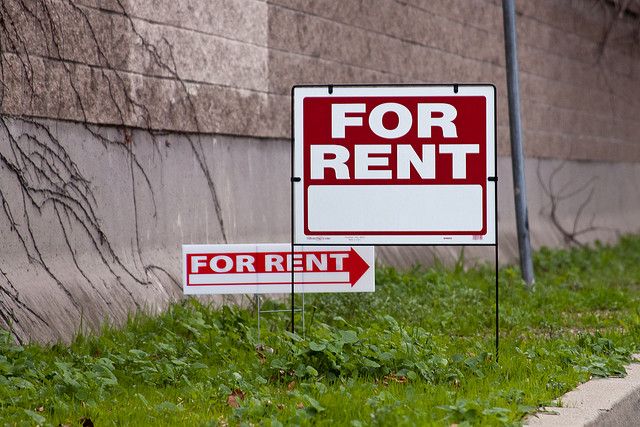 More than half the country spends at least 30 percent of its income on rent, according to a new report from the Joint Center for Housing Studies of Harvard University. We often talk about various academic studies and reports here at Next City, but these findings pose a problem that has escalated over the last decade with no end in sight.

Forty-three million American households rent their homes, accounting for 35 percent. (Up from 31 percent in 2004.) Part of this can be chalked up to the foreclosure crisis and the recession. The risks of homeownership, of course, are higher these days. Buying a home isn’t as secure an investment as it used to be.

The report doesn’t surmise that renting is necessarily a bad thing. Renting offers flexibility. There is less of a tax burden, not to mention you don’t have to foot the bill when stuff around the apartment breaks. The problem in the last decade is that while renting rates have risen, the incomes of renters have not. People today shell out more of their incomes month to month than they used to.

As you can see in the figure below, rental rates spiked the most among those between the ages of 30 and 39.

While the housing market still hasn’t quite recovered — New York City doesn’t count — the rental market bounced back quickly, partly because demand stayed roughly the same and was not, in the words of the report, caught up in “lending excesses that fueled the housing bubble.”

But as the rental economy bounced back, the tenants signing leases didn’t. Renter income was declining, which exacerbated the affordability problem. Housing experts have always considered 30 percent of a family’s income as the affordability watermark for housing. Between 2000 and 2010, the number of Americans over that threshold grew by 12 percent.

Moreover, the largesse of that increase came from renters facing what the report calls “severe rent burden.” This refers to those who spend more than 50 percent of their income on rent. Between 2000 and 2010, the severely rent burdened jumped from 20 percent to 27 percent. 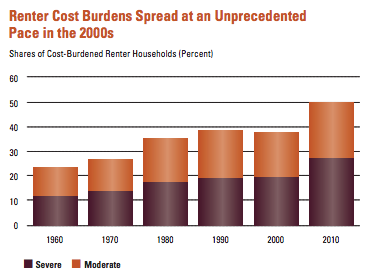 So what to do? This isn’t something that can be fixed on a city-by-city basis. This is housing policy 101 — and it has to come from the federal government. Rental subsidies help, but as the graph below shows: While the number of low-income renters increased, the safety net decreased.

There are, according to the report, a “variety of proposals” for housing assistance reform on the table from the U.S. Department of Housing and Urban Development, as well as the Bipartisan Policy Center Housing Commission. As it stands today, however, there is no relief on the horizon.