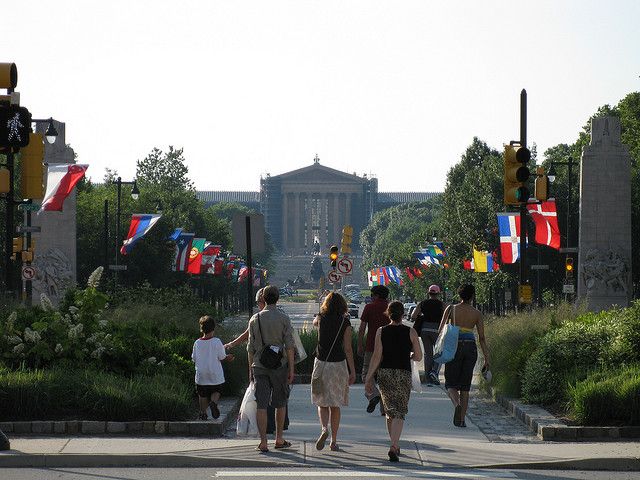 The Benjamin Franklin Parkway in Philadelphia, with the iconic Art Museum in the background. Credit: Flickr user elPadawan

As recently as a decade ago, that would have been a borderline absurd statement. Today, it’s a plausible one. And in the not so distant future, there’s good reason to think most Philadelphians will indeed consider the Parkway — that long-suffering hybrid of highway, parkland and tourism stop — to be the city’s preeminent public space.

And that, really, was the aim all along. In 1917, the Parkway’s original planners imagined a wide but dense boulevard lined with important buildings. That vision was never fulfilled: The boulevard’s museums are too few and far between to give it the urban quality its planners intended. And so, for all the beauty of those lush, diagonal views of the Art Museum and the city skyline, the Parkway on foot has, in practice, been a series of “big, vacant parcels framed by high-speed traffic,” said Harris M. Steinberg, executive director of PennPraxis, the University of Pennsylvania School of Design’s research arm.

The occasion for Nutter’s remarks was the publication last week of “More Park, Less Way: An Action Plan to Increase Urban Vibrancy on the Benjamin Franklin Parkway,” produced by PennPraxis at the city’s request.

The plan is jammed with compelling ideas. But even without it, the Parkway’s potential greatness had been growing more apparent by the year. Recent investments, from splashy new anchors like the $150 million Barnes Foundation and Sister Cities Park, to measures as modest as bicycle lane striping, are already luring more people to the Parkway.

And we’re not just talking tourists, but locals as well — a development that is shifting planners’ thinking about what the Parkway can be.

“We’ve been asking all this time. Is it for tourists? Is it a roadway? Is it a park? I don’t think those were the right questions,” said Steinberg. “What we’re asking now is, how do we make the Parkway more about its edges? More about the neighborhoods that surround it?”

The Parkway has many different identities. It’s a major traffic artery. It’s host to massive events (fireworks displays, Jay-Z concerts). Its museums make it on to every tourist’s checklist.

What it has never been, at least until now, is a true city park.

But with 70,000 people living within a 10-minute walk of the Benjamin Franklin Parkway, the city and PennPraxis are betting that, with the right mix of programming, amenities and traffic calming, the Parkway can evolve into a routine destination for vast numbers of Philadelphians. In short, the aim is to re-urbanize the Parkway.

The most visually striking of the proposed changes will be new uses and parks developed on four large spaces at the Parkway’s western edge.

Eakins Oval, directly across from the iconic Art Museum steps, neatly encapsulates the current Parkway’s misplaced priorities. It was converted in the 1960s under Ed Bacon’s leadership into a traffic circle, replete with a surface parking lot. Under the new plan, the parking is gone, but the hardscape remains. The goal is to make the oval a flexible and bustling seven-acre programming space: Temporary art exhibitions, pop-up dining, concerts and so on.

Iroquois Park, an underused lawn between Pennsylvania Avenue and the Parkway, just east of the Philadelphia Museum of Art, is slated to become a two-acre neighborhood park, linking the Fairmount neighborhood’s rowhomes to the Parkway. Likewise, an underdeveloped three-acre parcel in front of the Park Towne Place apartments on the Parkway’s southwest side is imagined as another park, perhaps with bocce or volleyball courts and a food kiosk.

The much-used recreational space at Van Colln Memorial Field would remain, but the plan calls for landscaping the edges, enlarging sidewalks and creating new play facilities for children and adults alike.

None of the designs for these new and renovated parks have been completed. But Steinberg was adamant that all of it — the horticulture, the built structures — must be done beautifully, in a way that’s “consistent with the high-quality urban design aspirations of the parkway itself.”

There is no clear-cut model for this. Best practices simply don’t exist for improving an eight-lane boulevard that does quadruple duty as a park, major traffic route, large event space and cultural capital (and no, the Champs Elysees comparison is not a realistic one).

But PennPraxis did find inspiration for pieces of its plan in the work of other parks and public spaces. Within Philadelphia, Franklin Square and The Porch at 30th Street Station have confirmed the power of programming and the lure of amenities as simple as movable chair and umbrellas.

One of the key recommendations in the action plan is the need for a “focused management structure.” PennPraxis was vague on what, exactly, this ought to look like, but it’s clear that treating the Parkway as just another facility in the Departments of Parks and Recreation portfolio is a good way to ensure that the action plan’s ambitions are never realized. City resources are simply too constrained, and the programming imagined in the Parkway action plan would require significant staff time.

Which is why the plan cites Brooklyn’s Prospect Park and the 25-year Prospect Park Alliance, a non-profit organization with dozens of employees and an annual operating budget of $13 million. It’s not clear the Parkway needs anything that robust. But some sort of non-profit/city cooperation seems likely.

The city appears ready to accept that. Indeed, the Parkway action plan looks to have genuine political support. Nutter is enthused, the Department of Parks and Recreation commissioned the plan and is fully behind it, and Deputy Mayor Rina Cutler, who manages streets, now seems to support it as well. So too does City Council President Darrell Clarke, whose initial enthusiasm for the project was unclear.