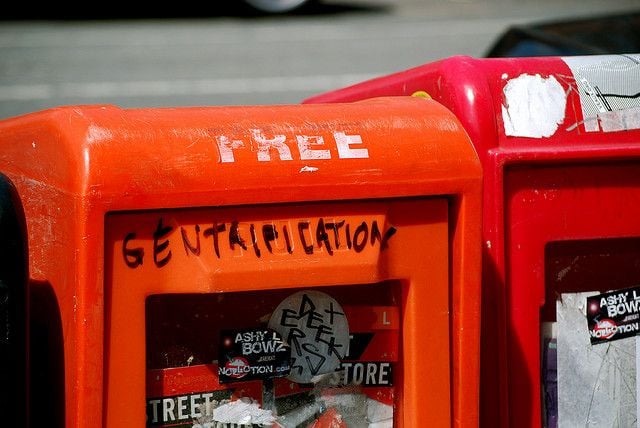 Love it or hate it, gentrification improves property values. And, between 2000 and 2007, 26 percent of Boston was gentrified outpacing the rest of America’s cities, according to new analysis from the Federal Reserve Bank of Cleveland.

Daniel Hartley, a research economist at the Federal Reserve Bank of Cleveland, explored the spread of gentrification in America’s 55 largest cities from 2000 to 2007 by analyzing which census tracts were primed for gentrification (those with below median home value) and how the housing prices, rents and income levels changed in those tracts over the seven year period. You can see all of Hartley’s data here.

Boston led the way with 26 percent. Washington, D.C., was hot on its heels with 19 percent and New York City just behind at 18 percent. So, East Coast cities were at the forefront of all of this. For once, statistical analysis dovetails with arguments generally had in dive bars. (Here’s an unexpected data point: Tampa had 18 percent of its city gentrified, the same as New York. Lena Dunham is cackling somewhere.)

Across American cities, gentrifying tracts saw massive growth rates in home prices (157.7) compared to areas that were not gentrified (49.8). What I found most interesting about Hartley’s research was the correlation between gentrification and credit scores. Basically: If you’re able to stick it out in your neighborhood as the rents and incomes skyrocket — perhaps your family bought a home there generations ago — you are likely to see your credit score increase. Hartley found an average increase by eight points in gentrifying neighborhoods. This is hugely important, with an increasing number of companies running credit checks for prospective employees. More worrisome is that delinquency rates remain higher in non-gentrifying neighborhoods.

Now, Hartley’s research doesn’t account for density or cost of living. Sure, the same percentage of Tampa was gentrified as New York. But I bet you can find a cheaper place to write the next great American novel (or raise a family!) in Tampa. That said, the fact remains that nearly a quarter of each city was gentrified over that period.

But the elephant in the room here is displacement. We don’t need any statistical analysis or data to know that when investment and development come in, the original residents — and the first –wave gentrifiers and artists — are often pushed out. Everyone wants to live in high value places. Hartley says sometimes this even impacts homeowners. “Renters face higher rents, and homeowners may face higher property taxes, possibly causing liquidity problems even though their home values have increased,” he writes.

I asked Hartley, whose work focuses on crime, public housing and neighborhood housing market dynamics, how we could apply this data to housing policy. Can these findings help shape more mixed-income housing instead of the age-old isolated low-income housing that just perpetuate concentrated poverty while gentrifying neighborhoods for the upwardly mobile get the good grocery stores and decent schools?

Hartley wasn’t quite ready to go there yet, saying, “I think that’s an important question and not something that what I’ve done speaks to.”

But there has to be a way to apply this — even if, as Hartley acknowledged, this research is a very rudimentary starting point — to concrete policies. If we know that stable neighborhoods increase financial health and decrease credit delinquencies, wouldn’t it make sense to push for more mixed-income ( read: affordable) housing in gentrifying areas?

If there are higher delinquency rates and rockier financial health in what would be considered “bad” or “poor” neighborhoods, it might behoove mayors and housing authorities to take a closer look at the benefits of mixed-income developments. And, as an extension of that, you’ll cut down on concentrated poverty and increase stability citywide.