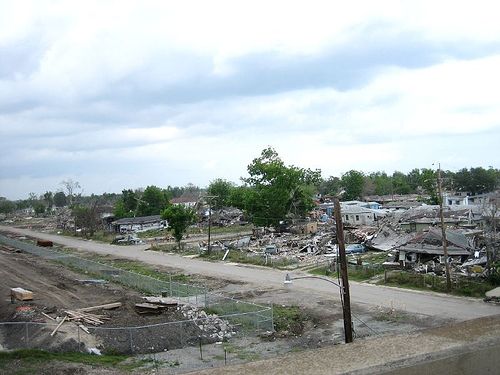 In the weeks and months following Hurricane Katrina, rumor spread that people who had remained in New Orleans reacted to their rescuers in most violent ways. Carl Lindahl, folklorist at the University of Houston, cites the story of New Orleanians who purportedly greeted their would-be rescuers – a Red Cross helicopter – by shooting at it. “When did that happen?” he asks. “And yet, everyone knows that story.” It, like other urban legends that portrayed New Orleans’s post-Katrina residents as dangerously criminal, easily took hold in the popular imagination – thanks to media, says Lindahl, that have long portrayed “people who are poor or different in a negative light.”

Of course, it wasn’t only the media that described people who remained in New Orleans in such a way; public officials churned out plenty of grist for the mill. Take, for instance, then-Mayor Nagin’s declaration of martial law, some 50 hours after the storm hit. “We called for martial law when we realized that the looting was getting out of control,” he explained to local radio station WWL-AM. (He did go on to admit that “people are desperate and they’re trying to find food and water, the majority of them.”) Similarly, on September 1, then-Federal Emergency Management Agency Director Michael Brown described FEMA as working “under conditions of urban warfare.”

But the benefit of hindsight has shown that some of the of violence perpetrated in post-Katrina New Orleans wasn’t the result of unruly citizens. Rather, it was those anchors of civil society – doctors at the city’s hospital and officers at the police department – who may have operated outside of the law.

In her Pulitzer Prize-winning article “Deadly Choices at Memorial,” which ran in the New York Times Magazine last September, Sheri Fink reported on doctors at New Orleans’s Memorial Medical Center who evidently decided to euthanize those patients they deemed too obese, “fragile,” or otherwise hopeless for rescue. Anna Pou, the doctor at the center of the case, told 60 Minutes in July 2007 that she had attempted to “help” patients “through their pain.” A New Orleans grand jury decided not to indict Pou on second-degree murder charges; none of the other personnel allegedly involved has been convicted, though several face pending wrongful-death civil suits.

Now, in the first of at least eight such incidents under investigation by federal law enforcement, the Attorney General has charged four current and two former members of the New Orleans police department with shooting six people, killing two, in the so-called Danzinger Bridge case. According to the indictment, the policemen – including two sergeants – shot at six people on their way to a supermarket for supplies, killing 17-year-old James Brisette and severely wounding four members of a single family. Shortly after, former officer Robert Faulcon allegedly shot Ronald Madison, a mentally disabled 40-year-old, in the back. Faulcon had been walking with his brother to check up on their third brother’s dentistry office. As Madison lay dying, the indictment says, Faulcon kicked him repeatedly.

At a press conference in September 2005, then-deputy police chief Warren Riley said that the officers acted in self-defense, which the officers involved maintain. “They approached the subjects who were several, several feet away, who fired on the police officers,” Riley said. “The officers returned fire.” (The indictment also alleges that this narrative was constructed as part of an organized cover-up of the shootings.)

When it isn’t attributed to the residents themselves, the breakdown of social order in post-Katrina New Orleans is blamed on FEMA, President Bush, and the ghosts and specters of governmental and bureaucratic ineptitude. Since, however, trusted guardians that were sworn to protect citizens were also responsible for acts of violence, new Mayor Mitch Landrieu must publicly support the ongoing investigations and wrongful-death suits if he’s to heal New Orleans as a city.