400-Plus Philadelphians Have Ideas for the City’s Next Monument 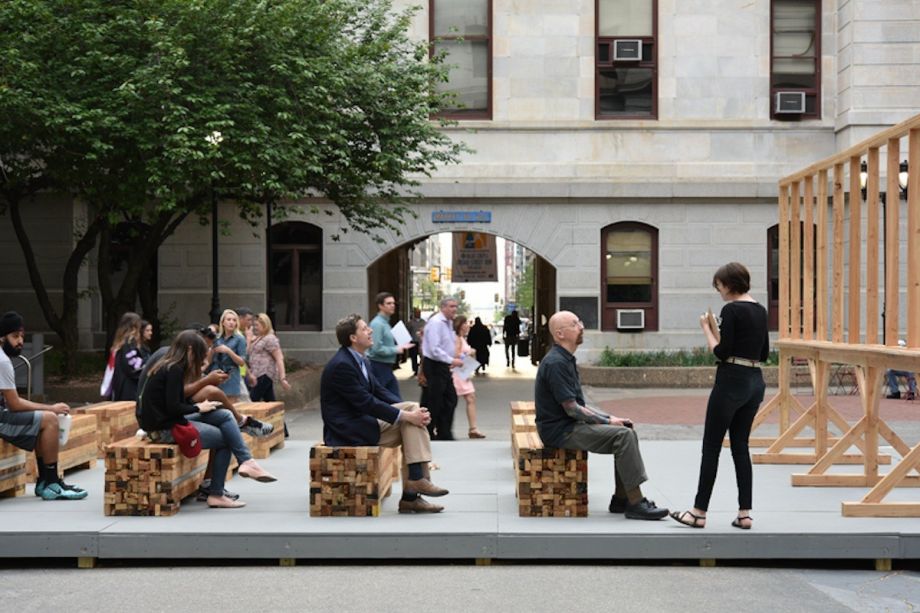 Passersby stop to listen to a presentation at Monument Lab. (Photo by Paul Farber)

Part art installation, part pop-up research facility, Monument Lab was a classroom made of plywood and set up in the courtyard of Philadelphia’s iconic City Hall. For the month of May, it was also a place where Philadelphians could consider how to use monuments to tell their story of their city. Over the course of the month, some 400 Philadelphians proposed monuments for the city they call home.

A new digital map of all the proposed monuments includes several takes on a classic oversized pretzel, abstract commentaries on gentrification, and sculptural calls for an end to violence. Several people proposed memorials to the MOVE bombing, which left 11 people dead and a West Philadelphia block lifeless 30 years ago.

More than a developer’s rendering or a master plan concocted by a city agency, the Monument Lab map tells the story of a changing Philadelphia, offering a telling portrait of a city that is experiencing population growth for the first time in decades and an attendant surge of reinvestment at the same time as poverty, unemployment and failing schools continue to define many neighborhoods outside of the downtown core.

“This is a pivotal moment in the transformation of Philadelphia,” says Paul Farber, one of the project’s co-curators.

The Monument Lab team saw City Hall as an ideal place to reach out to people from diverse ethnic and economic backgrounds. “We viewed City Hall as a key crossing point in the city,” says Farber. “We wanted people to know that if they stopped to talk to us, they would be donating their time and ideas. We wanted to create a mutuality in that exchange.”

Many of the proposals defined monuments along traditional lines, imagining physical structures that would not be out of place alongside the various sculptures and statues on the concrete plaza of the Municipal Services Building across the street from City Hall. Others were more abstract in their approach, concocting meeting places, social gatherings and music venues.

Visitors to the Monument Lab wrote down their visions for public art in the city. (Credit: Monument Lab)

“We saw a number of proposals that presented symbolic forms of representation as pivotal,” explains Farber, “and others that saw more material forms of redress, and many that bridged the symbolic with the pragmatic.”

One proposal, titled “The Revolution,” calls for direct action: “The monument is the movement of workers in the street. No other monument can be created for people who are oppressed and do not have the agency to create their own art.”

A significant percentage of the proposals address gentrification, while many more address racial and ethnic diversity more broadly. Others call for school funding and green spaces. Notably, a large number of the proposals that address social concerns also posit solutions.

“Embedded in the creative proposals were a number of solutions that both were about core values for the city and also practical steps,” says Farber.

Another proposal, titled “Point Breeze Memory Exchange,” suggests a monument that would also function as a social space: “I want a space where folks who have lived in Point Breeze for generations can exchange memories with people who are moving into this area.” Another, titled “Point Breeze 2 Infinity,” suggests officially naming the neighborhood “Point Breeze” before gentrifying forces rebrand the area. Storytelling and preservation of heritage is a common thread in many of the proposals that dealt with gentrification. Many proposals seek to combat displacement and the erasure of marginalized communities by making the experiences and struggles of those communities more visible.

A swath of proposals describe monuments that celebrate Philadelphia’s green spaces. “Monument to the Schuylkill” suggests canoe tours of the river’s wildlife. Another calls for a nature preservation. As Philadelphia sees its population increase, urban gardens are threatened, and many people are calling for a renewed appreciation for the natural environment.

Over the summer, Farber and the Monument Lab team will analyze their research with the help of a pair of Philadelphia high school students, as well as the input of colleagues from other cities who work in civic engagement.

The team also plans to post collected information on Open Data Philly with the intention of mapping abstract trends, capturing “things that are hard to map, like memory, experience and urgencies that are sometimes left out of municipal maps and data,” says Farber.

The findings will ultimately be presented at a show during Design Philadelphia at the Philadelphia Center for Architecture. The goal is to intersect notions of public art and public history. Some of the monuments may actually be built, says Farber, but “the first step is to treat the ideas as valuable, constructive and precious parts of Philadelphia history.”