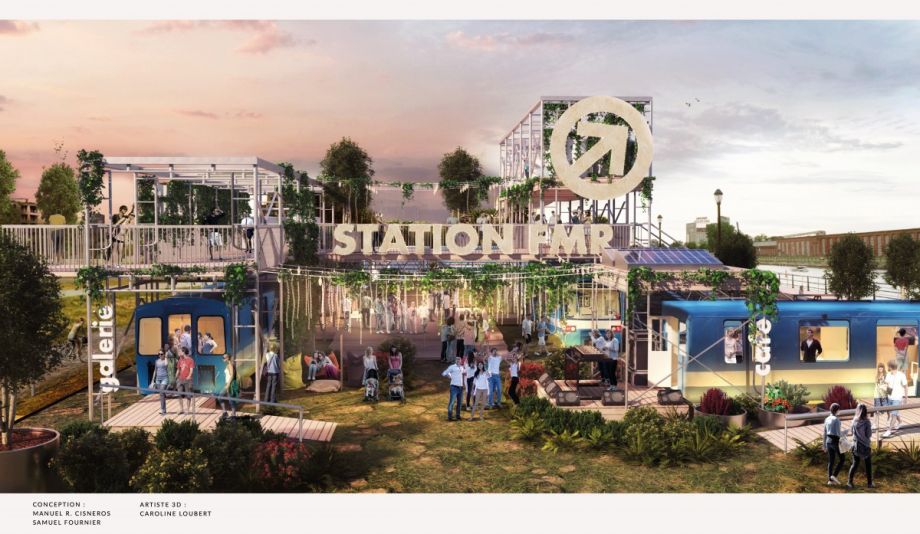 A rendering of F-MR Station, the pilot project opening this summer in Montreal, made of four repurposed Montreal metro cars. (MR-63)

While some retired cars are unceremoniously junked, others end up with a second useful life in a technical high school’s hands-on training lab, say, or in a facility for disaster and rescue scenarios. As symbols of community pride, sweet nostalgia or collective mourning, a few cars end up in museums made possible by passionate devotees of subway lore — though restoration of long-dormant vintage cars can be an expensive labor of love. In the 2000s, New York City’s MTA submerged thousands of subway cars in the Atlantic Ocean to serve as artificial reefs for sea life; steel scraps from Boston’s dismantled elevated Orange Line, as chronicled by a local filmmaker, journeyed to Japan before ending up in Arizona as part of the Roosevelt Dam Bridge.

In 2016, the Société de transport de Montréal (STM), facing the aging-out of the original MR-63 cars on its 50-year-old subway system, put out a call for proposals for creative reuses. From 30 submitted ideas, a round of seven finalists was announced in fall 2016, and some of the projects have now been completed or launched.

One of the largest projects, Project MR-63, launched earlier this month. In a pilot phase called F-MR Station, four subway cars will be transformed this summer to hold a snack bar, a temporary art gallery, a recording studio and a design showcase, near the Lachine Canal National Historic Site in southwest Montreal. In its later phase, expected to open in 2020, eight cars will form a multi-level permanent space to showcase local artists and food vendors and host community events.

MR-63 is the brainchild of a pair of entrepreneur brothers, Frederic and Etienne Morin-Bordeleau. They understood that the subway has been a source of pride and fond memories to many Montreal dwellers.

“We wanted to reuse those iconic metro train cars. We didn’t want to lose them, but get them out of the ground and put them on a pedestal. That was really the beginning of the project,” says Etienne Morin-Bordeleau in a video about the project’s genesis. “Then we thought, why only get one? We could get several of them … [and] integrate what we are passionate about: gastronomy, art, culture and all that represents Montreal.”

Their project is helped along by a team of some 40 volunteers and pro bono assistance such as over $100,000 of architectural work, according to the video. Some logistical and financial steps still remain, including land use approvals, according to the STM.

Not all the projects are as large. The first project to be realized was “Grand-Métis Station,” a single-car installation designed by ABCP architecture for the Jardins de Métis/Reford Gardens, a historic site and garden 350 miles northeast of Montreal. There, the iconic blue-and-white car appears to have dropped into the garden from nowhere. The improbable artifact provides locals, tourists and Montrealers who summer in the area a chance to relive the old Metro or experience it for the first time, says Jardins de Métis Director Alexander Reford.

“A train car in a garden is unusual in itself,” says Reford, “but it’s also an interactive space. It still has the driving unit inside, so it’s great for kids who want to play driver and play with the switches.” The car contains its original seats and poles and a new sound feature designed to replicate the old metro cars’ distinctive sound, which, Reford adds, “all Montrealers would recognize.”

A grant from a local arts council helped pay for the project, including purchasing the car from STM for roughly $1000 CAD, transporting it up the highway and lowering it with a crane onto a platform at its new home.

In its second life, the garden subway car has gained a more convivial atmosphere. “If you travel the metro in North America, people usually don’t talk to each other on the metro, they sort of sit glumly,” Reford observes. “This place is happy and chatty—people are spontaneously interacting. So it’s interesting how the same spatial unit can be transformed in a different environment.”

Another of the reuse projects will place a car entirely inside a building. At Polytechnique Montreal, the engineering college of University of Montreal, students plan to repurpose a subway car into an interior meeting and conference space associated with the school’s fab lab, its makerspace for students, university staff and the general public.

“Our young engineers of today will see how technology was done at that time, in the 1960s,” says Jean Choquette, director of strategic planning and government relations. “The lighting and ventilation will be upgraded, but we want to keep the original integrity of the car as much as possible.” Between now and the installation in 2019, a slew of engineering and design tasks will need to be done to ready the space for the 26-ton, 60-foot-long car, not to mention continued fundraising to support the estimated $500,000 installation.

Only a few cars were offered in the call for proposals. Most of the 336 retired cars have been recycled in an environmentally conscious fashion, says the STM. Providing cars to community groups does not save the agency money; in fact, it costs more than recycling because of the need to first remove hazardous materials, which for recycled cars is done by the recycling firm. But the innovative program brings intangible benefits in creative energy and municipal pride.

“The MR-63 métro cars have been part of Montréal’s heritage for more than 50 years,” an STM spokesperson said in an email. “While the majority of metro cars will be recycled, the public was offered a chance to give them a second life. …We encouraged entrepreneurs and visionaries to design a project that provided citizens with a new experience to share in, while contributing to the longevity of an exceptional heritage.”