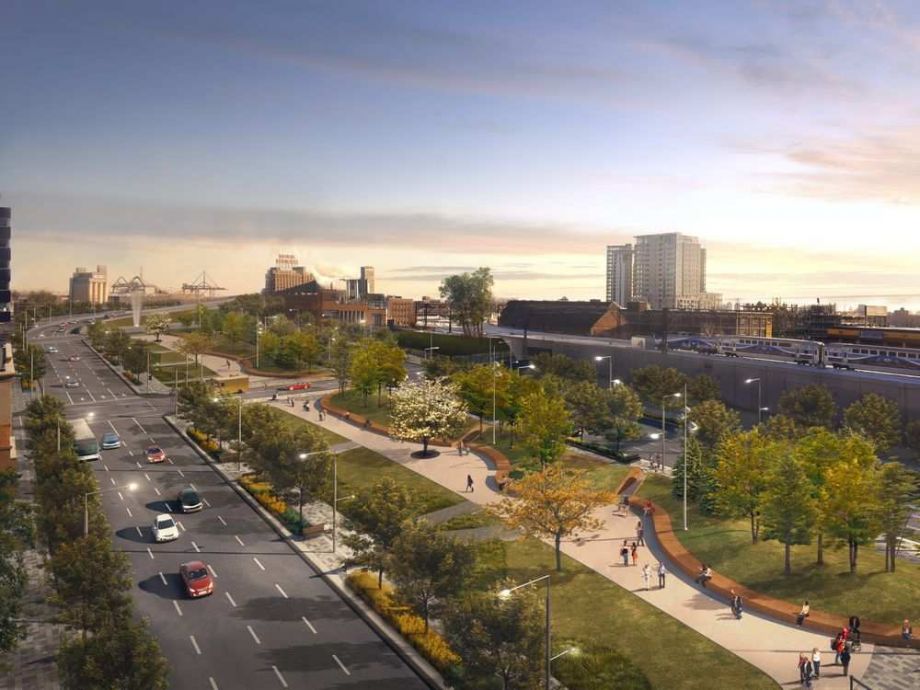 A rendering of the new Bonaventure urban boulevards (Credit: City of Montreal)

Montreal has begun tearing down its part of a mid-century expressway to make way for a greener, more transit- and pedestrian-friendly boulevard, reports the Montreal Gazette. The Bonaventure Expressway, an elevated 11-lane highway built for Expo 67, will give way to the street-level Bonaventure urban boulevards, a combined nine lanes of traffic separated by a series of green spaces. Montreal’s new, $142 million entryway is scheduled for completion in mid-2017, just in time for the city’s 375th anniversary.

The Bonaventure Expressway is partly owned by Ottawa, and is currently elevated only for a portion of its length through Montreal, dipping down to street level after it passes through Griffintown, a neighborhood lacking in adequate green space. The elevated half-mile is the final portion of the expressway to be torn down. An earlier plan to erect buildings between the two new boulevards met staunch opposition for failing to create more parks there. The final design includes about five acres of open space, lined with trees and benches, and featuring large public art installations. The greenway is being touted as a connection between neighborhoods formerly severed by the expressway.

The design also commits one lane of northbound and one lane of southbound traffic as a dedicated lane for busses. To manage congestion with fewer lanes, the city is installing an “intelligent transportation system” that will adjust traffic signal timing according to demand. A proposed new light-rail system that would connect downtown with South Shore, Trudeau Airport and West Island could be built parallel to the boulevards, further reducing congestion.

Bike lanes will also be included on the east-west streets that cross the new boulevards, but the city hasn’t decided whether to create them on the boulevards themselves. Officials have said they’re concerned about how the lanes would interact with the dedicated bus lanes. About 1,000 busses currently use the expressway every morning, and another 1,000 every afternoon, and frequency is not expected to change with the new roadway.

Demolition has shut down the highway since July 1, and is expected to be completed in September. The new roadways should be completed by the end of the year. Mayor Denis Coderre told the Gazette, “the sacrifices will be worth it. … At the end of the day, we will be proud of our city because this is going to be a hell of a boulevard.”