Montreal Is Ready for Supermarket, Version 2.0 – Next City

Montreal Is Ready for Supermarket, Version 2.0 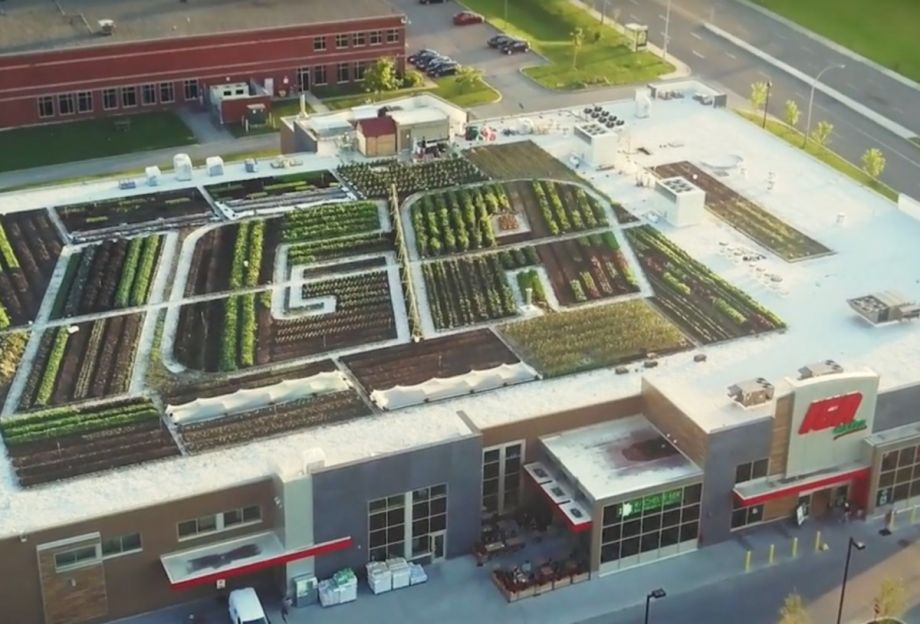 This summer, a Montreal supermarket announced that it was the first in Canada to have a green rooftop farm producing vegetables that are then sold in the store. The great news signals a positive shift in thinking about urban ecology, sustainable urban design, health, local economic development and more. My 2006 master’s thesis in urban planning is about urban policies that could encourage rooftop greening in Montreal so, naturally, I’m excited.

The Montreal borough of Saint-Laurent implemented a policy in 2015 requiring all new buildings to have a green or white roof on 50 percent of the surface. The Duchemin family, who owns the supermarket, IGA Extra, saw an opportunity to create an actual farm: 1.5 acres on the roof, with over 30 types of vegetables, sold under the brand Frais du toit (meaning, “Fresh from the roof”). They greened their roof, and are also producing food. Customers can even keep an eye on the rooftop production via a livestream feed in the vegetable aisle.

Tim Murphy, the project coordinator and urban gardener for La ligne verte, the company that installed and manages the rooftop farm, told me that this project is ‘’an innovation for consumers and supermarkets in Quebec.’’ According to him, it has ‘’enormous potential to raise consumer awareness about local, healthy, ecologically responsible and seasonal food.’’

The store managers are also learning firsthand about the work of farmers and the many challenges they face, from climate and insects to fertilisers and planning for production in terms of clients’ demands and tastes.

Supermarkets are cornerstones of neighborhoods. One way to make more sustainable urban neighborhoods is to encourage ecological (green or white) rooftops. The benefits are well documented, including reducing the heat island effect and reducing stormwater runoff.

Cities have many resources and opportunities to improve neighborhoods in collaboration with the private sector. Supermarkets are important hubs (or nodes) in communities. Everyone eats. Unfortunately, the norm for a typical supermarket is a large, windowless building with endless aisles that is often surrounded by parking lots, is difficult to maneuver with strollers, and is difficult to access for pedestrians and cyclists. Basically, the type of place you want to get in and out of as quickly as possible. In addition, food on the shelves is mostly transported from faraway places and packaged in plastic and Styrofoam. Our typical supermarkets are nothing like the farmers’ markets that we love going to with our children, where music plays, fresh food overflows on tables, and there’s direct contact with farmers, and lively interaction with our neighbors.

Supermarkets can do better — and communities are ready for a new version of stores in urban and suburban areas. Let’s dream. Supermarkets can be welcoming, productive spaces, better linked to their surrounding social, environmental and built environments: a supermarket, version 2.0. Especially in urban areas, these often large spaces need to be multifunctional and respond better to the needs of their communities. And cities have a role to play in bringing about these kinds of changes by working with developers and supermarket owners to help better integrate stores into today’s realities. Also, municipalities can implement forward-thinking zoning and regulations, which encourage new developments to respond to future needs of citizens and positively respond to climate change challenges.

I have hope that supermarkets can become key members of our communities and provide not only healthy, affordable food for all, but also warm, welcoming spaces where neighbors can interact, learn about cooking and healthy eating, and connect with where their food comes from. Rethinking the design of supermarkets and their connection to the urban fabric is one important piece of the puzzle. Producing food locally, on site, is another piece of the puzzle, and is a good step forward toward reducing the environmental impacts of food transport, and providing fresh, healthy food for consumers and cultivating healthy communities.

Rotem Ayalon is a 2017 Next City Vanguard. She works as a food and planning consultant for Quebec en Forme, advising creating and implementing strategies, action plans, programs and policies to encourage healthy eating and physical activity in cities in Quebec. Recently, she has been helping with the development of a food system plan in Montreal. Rotem has a master's in urban planning from McGill University and is active in her community with her green alley and the creation of a neighborhood alternative school.