Monorail Plans Have Some Asking, Is Medellín Too Obsessed With “Innovative” Transit? – Next City

Monorail Plans Have Some Asking, Is Medellín Too Obsessed With “Innovative” Transit? 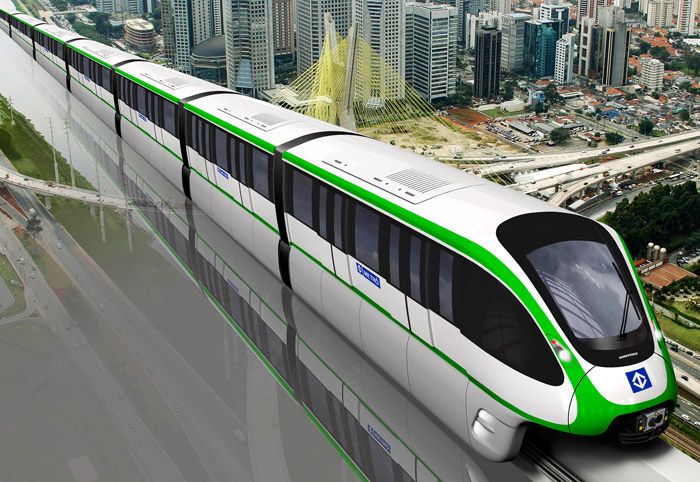 A rendering of a monorail being implemented in São Paulo. Plans for a similar system are being floated for Medellín. Photo credit: Bombardier

The dust has settled in the wake of the World Urban Forum that consumed Medellín during the second week of April. The banners have come down, blanket media coverage has ceased and hotel rooms are finally available once again.

By many accounts, the event exceeded expectations, with 11,000 foreign visitors reportedly injecting $25 million into the local economy over the course of the week. The international press gushed about the city’s achievements and how the Forum put urban resilience front and center – a theme that melded almost cosmically with its host city’s newfound celebrity status.

But the verdict wasn’t completely unanimous. For some, the Forum’s celebration of the city’s glitzy mega-projects – from gondolas to libraries to botanical gardens – distracted from Medellín’s ongoing challenges at best, and at worst, willfully papered over them. On April 9, hundreds assembled in the impoverished eastern neighborhood of La Sierra to make exactly this point. The protest was more festive than militant – some dressed in wacky outfits, others corralled rambunctious children and the whole outdoor gathering was backed by a live band playing traditional Colombian music.

The motley blend of local residents, grassroots activists and a sprinkling of Forum attendees who had wandered astray had a firm message behind their playful attitude, however. They were upset at what they perceived to be a lack of public consultation regarding major projects ostensibly intended to help them. Many felt overwhelmed by the rush of change the city is now famed for, with some unconvinced that the welfare of poor communities is really at the heart of the social-urbanism agenda Medellin has famously pioneered.

Conspicuous among the complaints from the people marching out of La Sierra and through other neighborhoods in the district of Villa Hermosa, more commonly referred to as Comuna 8, was the planned arrival of a monorail. The city is currently studying the feasibility of a monorail line that would stitch together several low-income neighborhoods in Medellin’s northeastern quadrant. The Urban Development Corporation is seeking private investment for the $200 million project, which it projects would carry up to 50,000 riders per day.

But even though such a system would serve Medellín’s poorer neighborhoods, it’s become a flashpoint in a city that, in the protesters’ minds, has become overly enamored with “innovative” transit. For these residents, the monorail is one mega-project too many, an unnecessary addition to Medellín’s world-famous transit system, which includes gondolas, escalators and BRT. “This monorail goes between two neighborhoods, but nobody here wants to travel between neighborhoods, they want to go to the [city] center to work,” says Carlos Velasquez, one of the leaders of the protest and a resident of Comuna 8. “Why is the government focusing time and money on a project that the people here don’t want or need?”

One of the new formal buses that are replacing minibuses in districts like Comuna 8. Photo credit: Charles Parkinson

The answer to that question, in some residents’ minds, lies in the city’s shifting ambitions. Medellín has spent the last two decades building state-of-the-art transit systems for the masses. Its gondolas and escalators have been credited with driving down crime and expanding mobility in the city’s poorest neighborhoods. But this latest project, the protesters fear, isn’t really for them at all, but instead a shiny fetish object for exactly the kind of thought-leaders who flock to the World Urban Forum.

With Medellin’s profile rising so fast, it’s not difficult to imagine a certain pressure to generate ever-more impressive amenities to keep the global spotlight trained on the city. Curtiba, Latin America’s original urban superstar, ultimately suffered a bit of this narcissism, tossing up infrastructure that, at times, seemed intended to dazzle the world first and serve its residents second.

Comuna 8, of strategic importance to criminal organizations transiting drugs through the city, is one of Medellin’s most violence-ravaged sectors, and it is in this context that the outcry should be understood. While La Sierra is due to be served by a new gondola line, hopefully improving security in the neighborhood, for now street gangs and larger criminal groups are the district’s arbiters. So the sense that an impending major project may not have the community’s interests at heart is merely a reflection of the state’s seeming indifference to the district’s plight thus far.

Furthermore, the monorail is the centerpiece of the city’s controversial “green belt” project, intended to stem sprawl and slow the continued illegal construction of irregular housing that makes up the poorest communities at the city’s extremities. The green belt project, too, has been accused of pushing poorer residents aside for the sake of a world-class public-works project aimed largely at the media.

And the monorail isn’t the only element of the transit system to come under fire in Comuna 8. The city has gradually been replacing traditional district-based bus services with a centralized system. The new modern buses are integrated into the wider public-transport network, and are cleaner and more reliable than the exhaust-belching minibuses that currently clog the city’s streets. Yet some riders complain that the new system doesn’t serve the community in ways the old one did. According to Velasquez, drivers in the new service will no longer be able to let a hard-up regular skip a fare and pay it back later, a common courtesy that many of the poorest rely on to get to work or run essential errands when they’re all out of money. And passengers will be forbidden from bringing large or unusual cargo on board the new buses, like live chickens – not at all unusual on the outskirts of the city, where rural and urban begin to blur.

Ultimately, the lesson from the unrest surrounding the city’s evolving transit system in particular – and the World Urban Forum in general – may not be that such schemes are unwarranted, but that transparency is essential. If promoting tourism is a major factor in the monorail scheme, nearby communities should be advised on the resulting economic benefits they can expect, and even offered the chance to pursue the business opportunities they fear outsiders will snap up. A scheme that promises powerful social benefits will work best with as many people behind it as possible.