MoMA: An Exhibition of Resilience – Next City

MoMA: An Exhibition of Resilience 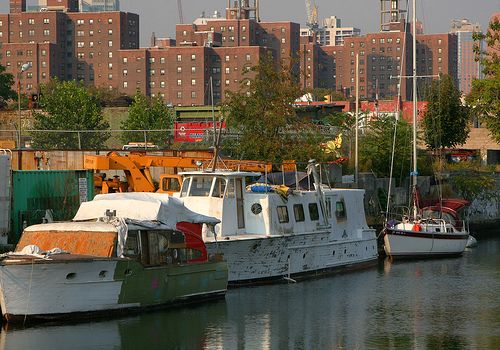 The Gowanus Canal is re-imagined by SCAPE/Landscape Architecture PLLC in this Moma exhibit. zenobia_joy

Now through October 11th, architectural teams will exhibit models of a redefined New York Harbor at MoMA. The exhibition, Rising Currents: Projects for New York’s Waterfront is organized by the Museum of Modern Art and P.S 1 Contemporary Art Center and responds to effects of climate change, such as rising sea levels and regular storm surges. Showcasing the creative efforts of five interdisciplinary New York teams of architects, engineers, and landscape designers, this initiative also conveys New York City’s continued resilience in the face of crises.

Resilience is New York’s prominent habit, draped haphazardly around its mass as an invisible cloak – a superhero force enlisted in the face of terrorism, financial upsets, and unstable housing markets. In his essay, Regional Resistance: A Critical Examination of the Ecological Framework, Todd Swanstrom claims that multiple points of equilibrium are a key feature of resilient cities. These urban areas are able to adjust their social, political and economic foci without unsettling the city’s vitality or balance. As an example, regions which produced a variety of goods and services were better able to endure the historic shift from an industrial to service economy. Urban resilience, a sand-dusted seesaw, was maintained as hard-hat construction workers shimmied across the structure, taking up cell phones and computers. The MoMA exhibition draws on New York’s resilient character.

The hard infrastructure that surrounds New York’s harbor on New York and New Jersey coastlines conveys the area’s resistance to water’s soft influence. Since the 1600s, New York has reinforced this dynamic by building docks, fortifications and sea walls and dismissing the natural marsh landscape. The area’s resilience is undermined by the noted absence of infrastructural diversity. Cement and steel shadow wetlands and long grasses. Lower Manhattan specifically, the MoMA press release says, is “at odds with nature.” The region is ill-equipped to confront an external force – climate change – in its current incarnation.

The exhibit resolves this imbalance. Featured models and drawings portray an estuarial environment. Part land and part sea, this space – an amphibian’s paradise – is a multifaceted environment that reflects Swanstrom’s definition of resilience space.

The Architecture Research Office (ARO) and dlandstudio re-envision Lower Manhattan as a “natural space” with salt and freshwater wetlands as well as greenways and streets that interlace concrete with soil- and salt-tolerant plants. Concentrating on the area surrounding Liberty State Park, the Statue of Liberty, and Ellis Island, LTL Architects propose a hybrid landscape with aquaculture (water farming), an aqua-hotel, and water transportation. In Bayonne, Matthew Baird Architects designed a reef of industrial glass bits and SCAPE/Landscape Architecture PLLC envisioned Gowanus Canal as an oyster nursery. Narchitects create habitable piers that extend over water and envision a whole new housing type.

These models are exciting in many ways. They represent flexible systems of resource and water management, urban building and land design. New York and New Jersey coastlines are positively altered. Composed of natural and synthetic infrastructure, they will be better able to respond to external forces, specifically climate change. New Yorkers might note the transformation, in a fantastic way, sliding scaled tails across aquatic communities near Sunset Park and swimming through the submerged industrial artifacts of Bayonne. The city will flaunt its resilience.