Digitizing the 21st-Century Prison – Next City 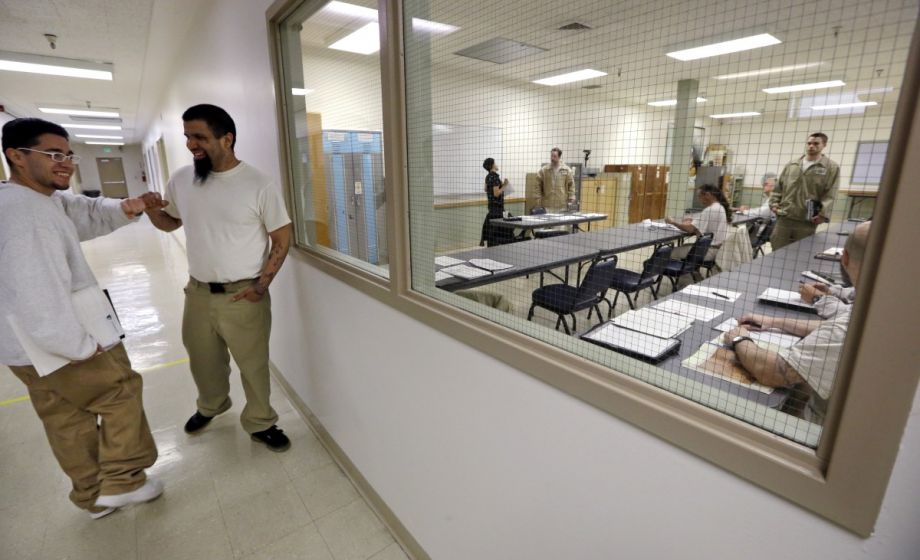 Inmates at Monroe Correctional Complex in Washington talk before heading into a class. (AP Photo/Elaine Thompson)

This month, inmates in more than 100 American penal institutions will begin receiving federal financial aid for higher education for the first time in more than two decades.

That’s good news for men and women in prison — 95 percent of whom will be released back into the community at some point. But bringing the benefits of a college degree to the greatest number of incarcerated people will require fundamentally changing how we deliver educational programming to prisoners.

A report released Monday by the Vera Institute of Justice details a host of obstacles faced by prisoners who want to earn college credits while incarcerated.

The Second Chance Pell Pilot Program launched last year by the Department of Education went live on July 1, with 67 institutions of higher learning participating. A total of 12,000 inmates in 27 states are expected to benefit from the experiment, which offers limited exemptions to a 1994 ban on needs-based Pell grants for inmates. After that ban — signed into law by President Bill Clinton — put a virtual halt on the delivery of higher education in prison, the number of college programs for inmates dropped from nearly 400 to the single digits within a few years.

Advocates have been calling for reinstating Pell grants for inmates ever since, citing the dramatic reduction in recidivism (43 percent, according to Vera) for ex-offenders who gain college credits while incarcerated.

Thanks to state-based initiatives and money from private foundations, the percentage of prisoners enrolled in postsecondary correctional education programs has rebounded in recent years.

Unfortunately, a lack of money is just one of the barriers keeping inmates from the classroom. Most educational programming in jails and prisons is delivered in a physical environment that is tightly orchestrated and logistically constrained. It often requires volunteers willing and able to travel to the facilities, and corrections officers to move inmates to and from class and stand guard during lessons. Classes tend to be small. As a result, thousands of inmates are relegated to waiting lists, sometimes for years, before earning a slot.

This has led to a stubborn imbalance in the availability of college programming behind bars. According to the Vera Institute, only 35 percent of state prisons report providing college courses — which are available to just 6 percent of the nation’s prisoners. Only a handful of those students complete the coursework necessary for a bachelor’s degree. In 2011, the Institute for Higher Education Policy (IHEP) reported, just 13 states accounted for 86 percent of inmates enrolled in college programs.

That’s particularly troubling considering the changing face of the U.S. job market. More than 60 percent of jobs will require at least some college education by 2018, according to projections from Georgetown University. That will only make it harder for ex-offenders who already struggle to find a job upon reentry.

Jeanne Bayer Contardo, author of the book Providing College to Prison Inmates, blames the programming bottleneck on the near absence of effective digital learning resources in correctional facilities.

“A large number of non-incarcerated students use internet-based distance education to access post-secondary education, [however] very few states have developed ways to provide inmates with such resources,” she wrote.

As the rest of the world has catapulted into the digital age, correctional facilities remain mired in a technological backwater.

Since 2013, the Federal Bureau of Prisons has operated the Trust Fund Limited Inmate Computer System (Trulincs) — a fee-based email and news service. But state facilities nearly universally deny digital connectivity to inmates. This leaves a vast platform of educational and programming resources off the table for millions of men and women behind bars.

Both the Vera Institute and the Institute for Higher Education Policy have called for the development and expansion of internet-based delivery of education as one way to improve ex-offender outcomes.

Entrepreneurs are also working to fill the gap.

“When you think about a typical prison in America, holding between 1,000, 2,000 people, mostly men — that represents a huge set of educational and job training and reentry needs and it’s a very diverse set of needs,” explains Chris Grewe, who has worked for many years developing innovative solutions for the delivery of education. “In the absence of technology there is no way to meet all those needs.”

After touring a California prison in 2013 and seeing the inefficiency of its educational programming, Grewe founded the company American Prison Data Systems with the goal of bringing prison learning into the 21st century.

Grewe’s platform relies on specially modified Galaxy S2 tablet PCs that are rugged enough to withstand the physical stresses of prison life. They come preinstalled with educational and vocational apps, but are customizable and can scale to suit individual inmate needs.

The tablets are connected to the outside world over Verizon’s 4G LTE network, but they rely on a private network that never connects to the public internet. The system uses mobile device management software from a company called AirWatch to filter and monitor content, and prevent inmates from engaging in prohibited activity, such as connecting to social media.

A handful of startups, including JPay and Telemate are now marketing tablet technology to correctional facilities — but Grewe says in most cases the devices are used for infotainment and communications.

“We are for all intents and purposes the only educational player in the space,” he says. “And most of the for-profit ventures in this space charge inmates to use their products. Our tablets are 100 percent funded by the facilities.”

The APDS system is currently being used in 17 correctional facilities across the U.S., including the San Francisco and New York jail systems.

Grewe says a single, fully loaded APDS tablet costing $1,000 can save up to double that amount in the long run by, among other things, reducing the pressure on prison classrooms, and allowing facilities to deliver reading material and provide legal resources electronically.

Tablets have also been shown to reduce inmate violence by addressing isolation and idleness. Perhaps most importantly, the hands-on experience enables prisoners to develop technical skills many of us take for granted.

Technological proficiency is an issue that is often overlooked by a reentry community focused on providing post-incarceration basic necessities such as employment and housing. But with prisons largely cut off from the digital revolution, men and women regularly return to society who have never performed a Google search or made a phone call on a smartphone.

“We’ve excluded technology from our prisons for 35 years, but technical proficiency is now an essential job skill, a life skill,” says Grewe. “This isn’t an experiment anymore. Our mission is to change corrections for good.”