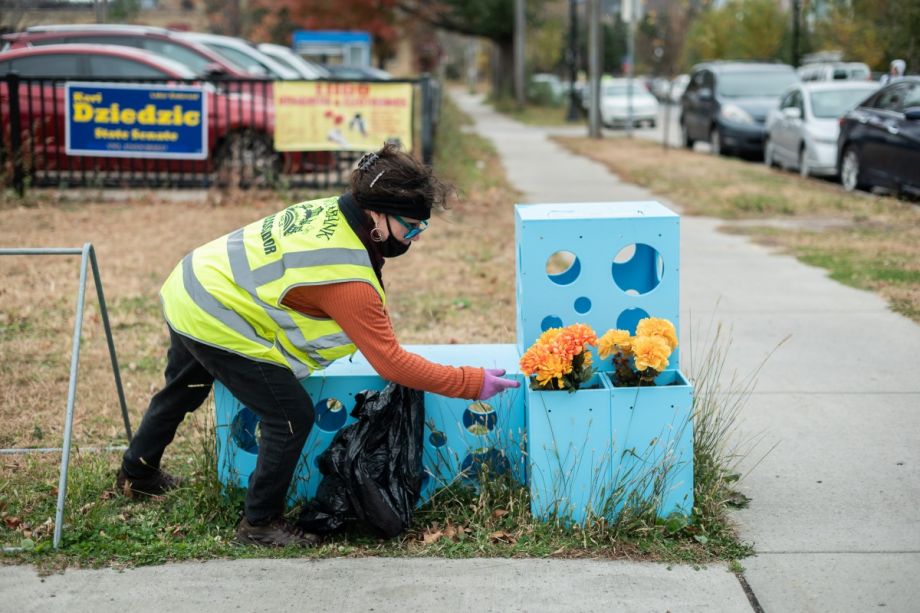 In an open field near the major intersection of Penn and Lowry Avenues in North Minneapolis, across the street from a liquor store and near several churches and a school, resides one of the city’s pilot “mobility hubs,” one of 25 spaces designed to increase access to low- or no-carbon transportation options.

These hubs are centralized locations where various forms of transportation come together on one corner, from bike lanes and bus stops to scooter, bike, and car shares. According to a report on the project, they’re designed to make people’s trips as “safe, convenient, and reliable as possible” by eliminating a few of the variables that can keep people from choosing public transportation over personal vehicles.

The idea is that by concentrating various modes of transportation in strategically placed, centralized locations, people will be more likely to use public or shared transportation. City officials hope that the project ultimately reduces the reliance on personal vehicles for those that have them and increases mobility for those that don’t.

While the project is currently under evaluation, early data suggests that roughly 800,000 trips have been made at hubs so far and 64 percent of users surveyed said that the improvements that the hubs bring makes them more likely to use the transportation options there.

The project is at the confluence of several of the city’s action plans and initiatives, from the 2017 Twin Cities Mobility Action Plan to Minneapolis’ involvement in the American Cities Climate Challenge and Transportation for America’s Smart City Collaborative.

Through the Smart City Collaborative, Jasna Hadzic-Stanek, transportation planner with the City of Minneapolis, and others leading the pilot received pro-bono consulting that helped identify the best locations for the hubs. “They looked at equity-based data, like 50 different data sets, to really help narrow down locations in areas of concentrated poverty,” Hadzic-Stanek says. “The goal was that these would be in areas that need these options while also meeting goals for safety and climate and so on.” Ultimately, the city created 12 hubs in 2019, and added 13 in 2020 for a total of 25.

The second phase of the pilot is slated to run through the end of January 2021.

In addition to the transportation elements, community ambassadors like Mark Woods not only help to activate the spaces, but increase safety as well.

“Our mobility hub has been a welcoming space,” says Woods, the project’s Northside Mobility Hub Ambassador. Working with a variety of local groups and schools, Woods has taken the opportunity to get North Minneapolis youth involved, going above and beyond his role of being a welcoming presence to organize and paint a mural after George Floyd’s death, for example. His efforts have also included handing out masks and conducting candy drives for kids who had to forgo trick-or-treating this year. “It’s become bigger than just cleaning up trash around the area,” Woods says.

After early users reported they felt unsafe using the hubs alone at certain times of day, community members like Woods were carefully selected to be staffed as on-site ambassadors through partnerships with community organizations.

“It’s important to have a recognizable face,” says Hadzic-Stanek of the decision to engage, for example, Somali-speaking ambassadors in the city’s Cedar-Riverside neighborhood, which has been called the “Somali capital of America.” “They do light maintenance and are trained to provide education around mobility hubs as well as information on low-income programs to use [bikeshare program] Nice Rides and scooters,” she says.

The project has required partnering with both other public and private entities, considering that the various right of ways could be owned by the city, the county, or the state while working with Lyft and Nice Ride has meant partnering with private companies. Looking to the future, the project is planning to collaborate with HourCar, a St. Paul-based non-profit carshare that is launching a one-way electric project next year. “We’re working to coordinate [that initiative] around the mobility hubs,” Hadzic-Stanek says.

As the pilot nears the end of its testing phase, Hadzic-Stanek is looking to gather enough information to make a completing case for capital funding to transition the program away from the whims of grant funding. Her team also plans to develop an app where users can book and pay for the various forms of trip’s transportation in one place. “That’s the long-term goal. Hopefully we’ll get there one day,” she says.