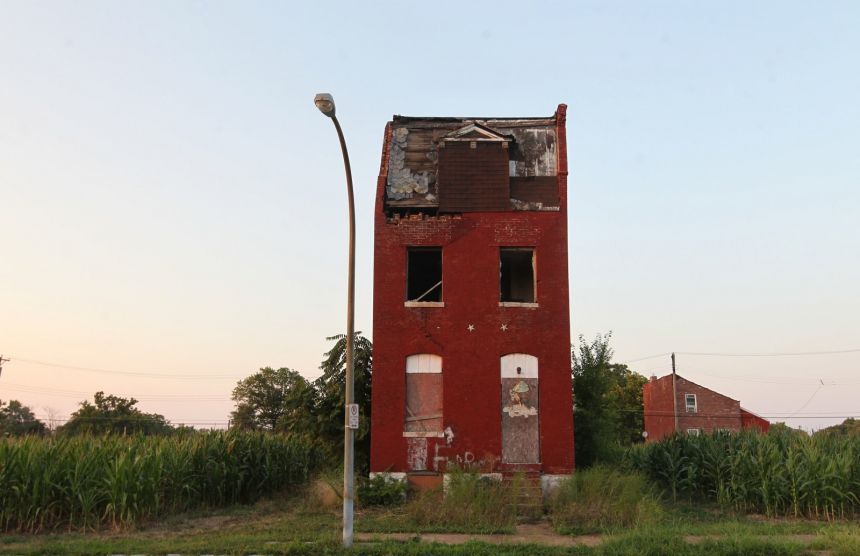 A building on St. Louis’ North Side, captured in 2013 (Photo by Laurie Skrivan)

Energy (and money) is mounting on St. Louis’ Near North Side. Three separate development projects that all touch the densely overgrown gravesite of what was Pruitt-Igoe public housing are leveraging city, state and federal power to transform the area, while residents grow even more anxious about what the future holds.

Last month, the Department of Housing and Urban Development (HUD) announced that the area around two Section 8 housing complexes in the Near North Side had been chosen for a $500,000 Choice Neighborhoods Planning Grant. The grant program, a successor to HUD’s Hope VI public housing approach, provides money for strategic planning with the end goal of replacing distressed public housing with high-quality mixed-income housing intertwined with local support services.

Leading the planning process is Urban Strategies, a 37-year-old nonprofit organization that’s partnering with for-profit affordable housing developer McCormack Baron Salazar, which is a frequent Choice Neighborhoods grant recipient. Urban Strategies will work with about 40 partner organizations to develop a plan to draw in residents with diverse incomes, pump up the area’s amenities and create upward mobility opportunities for locals — in a target area where 60 percent of residents live in poverty and the violent crime rates are double the city average.

Near North Side residents are used to top-down planning interventions. In 2003 real estate developer Paul McKee began acquiring parcels for his massive 1,500-acre Northside Regeneration project, a saga covered at length in Next City’s “The Subdividing of Pruitt-Igoe.”

The tearing down of the Pruitt-Igoe housing project in the early 1970s has become emblematic of the failures of misguided and poorly executed urban renewal policies.

McKee’s vision hasn’t fared much better so far, even though some are still hopeful about his prospects. His progress in redeveloping the neighborhood has been glacial: No major development deal of his has been constructed to date, despite the $390 million tax increment financing package from the city that he’s secured. The boundaries drawn for the Choice Neighborhood planning grant overlap with a large area of McKee’s Northside Regeneration plan’s boundaries.

In 2013, The St. Louis-Dispatch reported that McKee was in conversation with officials from McCormack Baron Salazar and Urban Strategies about future planning within his project’s boundaries, after the two participated in a local panel discussion about development in the area.

“I see this as someone else potentially implementing part of what Paul McKee has in mind and potentially revving up the market engine,” says Sarah Coffin, an associate professor of urban planning and development at St. Louis University, of the Choice Neighborhoods Planning Grant. “This is providing the specificities that he doesn’t have yet. … What I like about it is that it’s going to be focusing on mixed-income and affordability and not the straight-up market-rate projects that McKee was pushing when his project was first revealed.”

Yet another plan has the potential to shape the future of the Near North Side. Last year, the National Geospatial-Intelligence Agency (NGA) announced that the site of the Pruitt-Igoe towers was one of six locations the agency was looking at in its search for a new regional office. (It has outgrown its current facility adjacent to the historic St. Louis Arsenal.)

Coffin says that it is “nowhere near certain” that the NGA will move its headquarters to the North Side.

Recently the NGA widened their target area to a 100-acre plot just to the north of Pruitt-Igoe. Within the boundaries are more than 80 residences, several churches and 54 vacant land parcels. Even though the NGA won’t make its decision until 2016, St. Louis’ Board of Aldermen voted on February 13th to designate the potential footprint of the relocated facility as blight, making it easier to pursue eminent domain in the future. The city’s Land Clearance for Redevelopment Authority can now choose to borrow up to $10 million from the city to acquire the properties — half of which are owned by Paul McKee.

Pruitt-Igoe in 2013 (Photo by Laurie Skrivan)

Local residents, under advisement of the nonprofit Institute for Justice, have created the group Save Northside STL to thwart what they are calling a massive land grab.

“We know that this would be a backdoor way to use eminent domain without Paul McKee’s hands on it,” says Sheila Rendon, who owns a house one block north of the Pruitt-Igoe site. Her parents bought the house in 1963. “He would benefit from the land being cleared. And whatever project could come in the aftermath would have [to have] Paul McKee’s permission, because he owns the majority of the land.”

The three projects: Northside Regeneration, the relocation of the NGA, and the transformation project led by Urban Strategies all offer different quality-of-life improvements and economic development potential, but also real threats of displacement and gentrification.

Coffin says that compared to other mixed-income developers, McCormack Baron Salazar puts in more thought when it comes to community development strategies. “They do try to think about the hardest to house and how they reach them,” she says. “Of anyone, they would probably be the best at trying to address the equity issues. But they are just like everyone else in another respect — there is going to be displacement.”

She adds that the actor who holds the largest responsibility to the most vulnerable Near North Side residents in all of these cases is the City of St. Louis.

“What frustrates me about St. Louis is that they don’t see or [don’t] want to take that responsibility for the hardest to house or those who fall through the cracks and that is where government is needed,” says Coffin. “That’s the public good that they provide.”