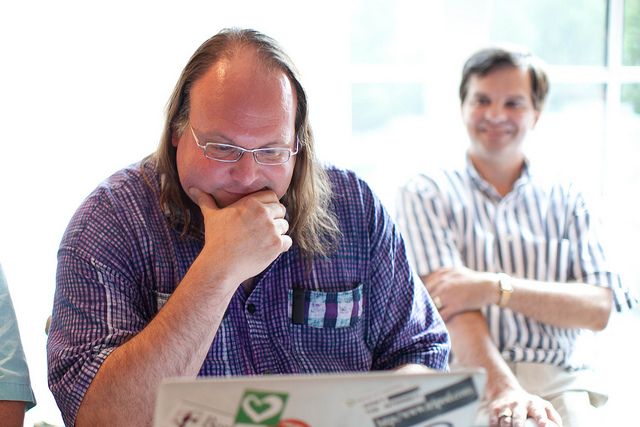 These days, Ethan Zuckerman is the author of a new book, Rewire: Digital Cosmopolitans in the Age of Connection, and director of MIT’s Center for Civic Media. But his career has long blended deep thinking and hands-on experience on how we humans engage as technological and social creatures.

Zuckerman’s resume includes co-founding projects like Geekcorps and blogging network Global Voices, serving as a longtime fellow at Harvard’s Berkman Center for Internet & Society, and numbering among the builders of Tripod, that early, pop-up laden platform for putting together personal websites. Though he works and teaches often in Cambridge, Zuckerman and his family live a 2.5-hour drive west in tiny Lanesboro, Mass.

Here, he talks about why cities matter, where we might be taking Jane Jacobs’ vision too far, and the possibility that we’re fooling ourselves into feeling cosmopolitan while eating takeout alone on the couch.

Next City: Your book deals with the possibility of mindfully using digital tools to reach beyond our usual environments and engage with the wider world. So does it even make sense to think of physical “cities” as a framework of understanding, like we do here?

Ethan Zuckerman: I do think that when we’re trying to understand broader social questions, it does give us a chance to be cross-cutting in one fashion or another. We’ve gone through a whole sort of post-colonialism of understanding that every country and community has its own unique problems, and people in the fields that I work in — development economics, social change — are pretty darn careful about not saying anything too broad or too sweeping. But part of what goes on with cities is that it’s a construct that lets us actually talk about similarities and comparisons rather than differences. I do think that we have to recognize that all cities are not the same, and that a dynamic or pattern that might make a lot of sense in one part of the world is pretty confusing or inappropriate in another part of the world.

Sometimes I think the obsession with cities and data in particular is taking us back to this very modernist, planned set of assumptions, where all the data is going to be the same in all places. There was an IBM group analyzing traffic flow in Côte d’Ivoire that came up with the remarkable finding that if Côte d’Ivoire would just follow IBM’s advice, their transportation system would be 10 percent more efficient. I find myself going, ‘We all know what happened when RAND tried to plan the New York City Fire Department and the Bronx burned down.’ But beyond that, the best we can do for the city of Abidjan is 10 percent, based on surveilling everybody in the city for a year? These solutions are not actually all that impressive. There are probably much more interesting solutions to traffic in Abidjan that are probably based on going to Abidjan, something other than doing data analysis somewhere far away from the city.

I’m in love with Adam Greenfield’s new little book against the “smart city,” where he basically argues that this entire construct is just kind of wrong from the start.

NC: Has the “age of connection,” as you put it, changed the role of cities in our lives?

Zuckerman: I have to be completely honest that I don’t live in a city. I live in a town of 3,000 people out in western Massachusetts. I do commute into a city, and I periodically turn to my city-dweller friends and talk about what to me seems like a certain species of insanity. [Laughs.] Living in a subset of American cities, particularly New York, Boston, San Francisco, Seattle, just to me seems willfully obtuse. You are being ripped off. There are no two ways about it. The amount of money that people pay here in Boston and Cambridge for a reasonable place to live to me just seems insane. For all these very good arguments about the efficiencies and vibrancy of cities, I kind of feel like it’s a conspiracy to make people feel good about how they’re getting ripped off by the real estate market. So I have to talk about cities as someone who has opted out in a big way.

To me, smaller cities make a lot of sense. But this is where I think the city as a construct gets very, very complicated. Does it make sense to talk about New York, London or Berlin as hotbeds of cosmopolitanism? Yeah, I’m sure it does. I’m not sure I feel the same way about Guangzhou in southern China, where I was for a bit of the summer: Massive city, giant manufacturing and mostly Han Chinese. Not a whole lot of obvious cultural manifestation.

We might have a moment where China is building cities that are utterly massive, but are built around a very different rule set than an American or a European city. The principle of, ‘We want walkable cities, we want everybody to be able to get their services within a mile of where we are,’ certainly sounds right for an American or European city. But I wonder if in some ways, what we like as wealthy, privileged, advantaged people in reasonably highly-functioning Western cities, we now hope for people in developing cities. But it’s a long way between Portland and Porto Alegre.

I spend a ton of time in Budapest for the Open Society Foundation, and I think it may be the most beautiful central city in Europe, just in terms of sheer architectural beauty and the way it flows. But when you ask Hungarians, they’re not particularly interested in living in the central city. They are really excited about housing blocks out on the city edge — sort of Brutalist, concrete blocks that have more space than the city apartments and have a sense of isolation and separation. To my eyes, I look at them and say, ‘You people are crazy.’ But that’s an extremely popular life choice. And that point, you have to say, is what I love about the city just culturally projected. Whose city are we talking about?

I guess what I’m wondering is, how universal is Jane Jacobs? Is this as culturally specific and blind as any other planning doctrine or trend that we’ve encountered at one point or another? Is there a way that this new urbanism — everyone should live in the central city, everyone should walk and take public transportation — has a certain amount of elitism? Central cities are pretty freaking expensive in a lot of cases. If you’re wealthy, you can be in Manhattan, you can be in Brooklyn, and have the opportunity to lean on all this infrastructure. But if you’re poor in New York right now, you’re pretty far out in Queens. More likely, you’re out in Yonkers. At that point, it may not make sense to have this vision of walkable urbanism.

NC: Rewire encourages readers to move beyond our natural tendencies toward homophily and use connected technologies to learn from people all over the world. But sometimes it can feel like when we do use the Internet to do that, we’re simply connecting with people very much like ourselves who happen to live in a different geographic place. Why do that when there are plenty of people in my own city whose life experiences I know little about?

Zuckerman: The whole book is basically a conversation about potential and reality. The potential of the Internet is that we’re going to get information from all over the world. And the reality is that, a lot of the time, we’re mostly getting information from people we went to high school with. The potential of the city is that we’re going to benefit from the fact that there’s a Uygur population somewhere over in Flushing, Queens, that we have so much to learn from all the different cultures, that I can go eat Senegalese food tonight, and that I’m going to brush shoulders with people from all over the world all the time. The reality is, it’s really easy to stay in your apartment and eat takeout food. You can fool yourself into being a cosmopolitan when you’re pretty isolated in your physical space.

Robert Putnam of Bowling Alone for years has been bemoaning how the Internet is going to separate us and how we’re losing the social fabric of mixing in public. But he’s done recent work that is much, much less discussed, because it’s really uncomfortable. He’s found that when you’re living in a city where you’re a minority, you’re probably going to hunker down. You’re probably not going to mix much with your neighbors. You’re probably going to spend a lot of time watching TV. Confronted with high degrees of cultural diversity, people, for the most part, don’t seem to step up to the challenge and meet their neighbors. In many ways, they hide from them. A lot of cities that have the highest degrees of civic participation are pretty ethnically homogenous.

I would love to be able to say, yes, cities are serendipity engines, and if you just fully embrace the city, and take advantage of all the cultural richness and diversity that’s available there, you’re going to find a way to get as much of that encounter as you get from having the Internet. But there’s no guarantee that you’re going to do it in the city. There’s no guarantee that you’re going to do it online, either, and my encouragement [in the book] is to look for bridge figures, look for translators and look for structured serendipity. And all of that is as applicable in an urban environment as it is in the online environment.