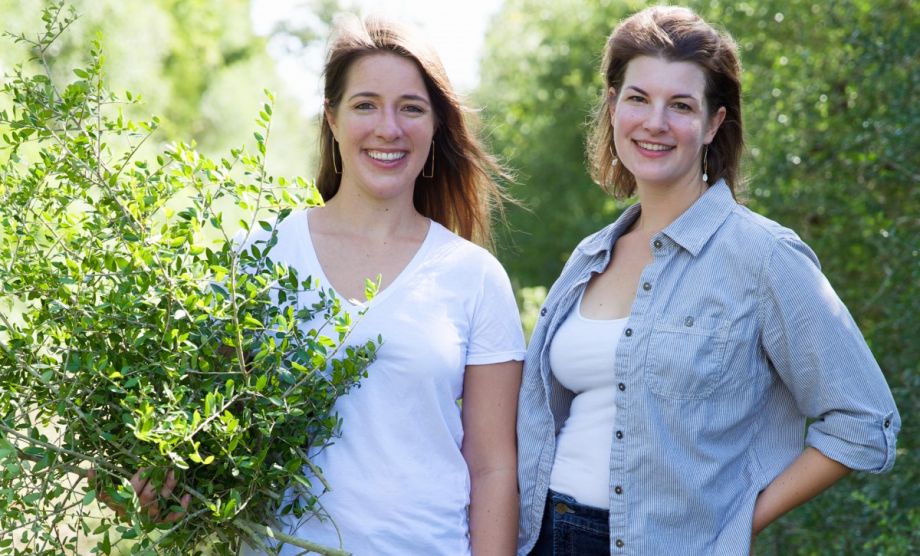 Texas experienced a roughly four-year drought between the end of 2010 and early 2015. While trees and plants withered, the native yaupon held on. Farmers and ranchers in the state had long viewed yaupon as an invasive pest, but as the drought ravaged other greenery, JennaDee Detro wondered if the yaupon might have something to offer. She and her sister, Abianne Falla, learned that Native Americans drank a ceremonial yaupon tea, akin to the yerba maté common in parts of South America. The sisters launched Catspring Yaupon in 2013 to harvest and market the plant, and from the start, they wanted to provide employment opportunities to people with criminal justice histories.

“We wanted to be intentional and careful in our employment practices,” Falla says. “For us it makes complete sense. Here is this incredible plant that is overlooked and undervalued and seen as having no value really in our community, and in the same way, there are so many individuals around us who are marginalized and written off as well,” she says. The company now employs a total of 12 full- and part-time staff.

Austin Foodshed Investors (AFI) became that champion. The Austin-based group has helped 27 other food entrepreneurs since 2015. It grew out of a “slow money” investment club. An offshoot of the “slow food” movement, which emphasizes home cooking and organic farming, the idea is to connect capital to sustainable local food systems. AFI partner Eric de Valpine estimates that the group has put about $2.5 million into food-focused companies in the Austin area. Roughly half of these businesses, de Valpine says, are women-owned. (Approximately a third are based in rural areas.)

De Valpine and partners began by asking potential investors in the Austin area if they would be open to putting money into local food businesses if they could get a rate of return that was at or slightly below the market rate. Ten people said yes. “There was money willing to get deployed, and there were businesses that could use it and utilize it,” De Valpine says.

AFI doesn’t take a piece of a company’s equity like many angel investors do. Rather, their private loans are generally paid back from a business’ profits. When a business needs a large amount, several AFI members may come together to lend. De Valpine says lenders can share due diligence about potential investments among themselves, but AFI doesn’t have a lending committee that approves loans.

According to de Valpine, AFI’s commitment to investing to do good means working with businesses that “have doing good baked into their DNA.” That may mean focusing on soil health or healthy food access, or employing people marginalized by criminal justice issues, for example.

First, AFI looks to connect entrepreneurs to investors who are committed to supporting the local food ecosystem. AFI investors aren’t lookling for a fast equity buyout through a sale of the company or the company going public for example.

In the familiar Silicon Valley model, de Valpine says, small startups like Catspring often find themselves on a “wheel of continually raising more money, trying to increase valuation, trying to get investors paid back.”

He describes AFI’s “bootstrap plus” approach as tying lending and capital to a milestone marker. The business owners know how much money they need and where those funds will be spent, such as a new piece of equipment or marketing. AFI then helps owners determine the best source of funding through coaching sessions and workshops. The process, he says, involves “lots of one-on-one.”

AFI provided a loan to Catspring so Detro and Falla could qualify for a USDA reimbursement grant. This kind of grant helps companies cover expenses they incur on a project, but businesses must front the money.

“They were pretty amazing,” Falla says of AFI. ““We still needed an influx of cash to get started, so they worked with us to tie the funding to that grant rather than to anything we were able to raise,” she says.

This kind of situation led AFI to recognize a second major way to support mission-driven entrepreneurs: Provide financial education to help identify the best resources and financing approaches for their particular situation.

“Ninety percent of what we were doing was education both on the investors’ side and the business side as opposed to helping investors deploy their capital,” says de Valpine. Now, he says, AFI is focused on doing more work with fewer companies.

This education is filling a critical gap, says Judith McGeary of the Farm and Ranch Freedom Alliance (FARFA).

“What we have now,” McGeary says, “is we have these small businesses that are starting where we’ve got an absolutely dedicated producer who wants to raise food, sell to their local community, rebuild the local food system. You’ve got immense consumer interest, and you’ve got no resources. You’ve got no guides and no models.”

FARFA created space at its annual conference for AFI to offer workshops on business and financial basics. She says that these resources have had a significant impact for some FARFA members allowing them, for example, to diversify into another kind of production.

“There’s a lot of good intentions in the entire space and a lot of difficulty connecting the dots,” says de Valpine, describing the challenges large agencies like the USDA and banks have establishing a financial relationship with food entrepreneurs. De Valpine says AFI is positioned to connect those dots and help agencies like the USDA and the Texas Department of Agriculture “deploy” their dollars to Austin-area food entrepreneurs, an ecosystem he says is “percolating.”