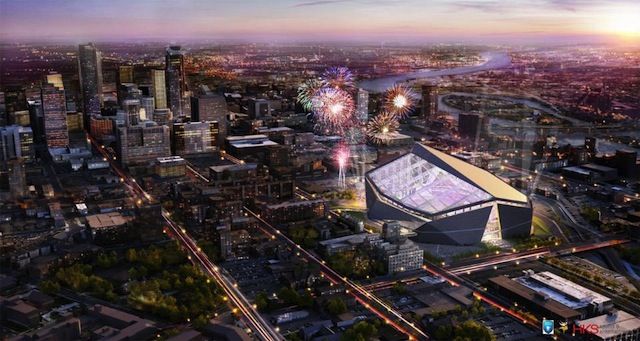 A rendering of the Vikings’ new stadium.

The state of Minnesota has found a new way to pay the bonds for the Vikings’ $975 million, publicly financed NFL stadium: A tobacco tax.

The team has guaranteed to pay $477 million of the price tag — roughly 49 percent — with the state issuing $348 million in bonds and $150 million coming from a city convention center tax. The first year of hard-earned taxpayer debt is due to the tune of $30 million, and Gov. Mark Dayton has earmarked $26.5 million of a one-time cigarette tax to cover the brunt of the debt. The remaining $3.5 of tobacco tax will go into the state’s general fund. Construction is supposed to break ground in October.

Meanwhile, a federal judge ruled earlier this month that Vikings owner Zygi Wilf and his family’s real estate development firm was guilty of fraud and violated racketeering laws on an apartment development in New Jersey.

The franchise is touting the typical job creation and economic impact numbers that owners use as a calling card when asking for taxpayer money: 7,500 construction jobs, 3,400 full and part-time jobs, $26 million annually in tax revenue, $145 million in direct spending from Vikings fans. It wants 51 percent of the stadium paid for 10 home games a year — eight regular season, two preseason — and the occasional playoff game. Perhaps Prince can play the other 355 nights to increase the economic impact.

Revenue commissioner Myron Frans emphasized that this was a one-time highjacking of the tobacco tax. Gambling revenue from electronic pulltabs was supposed to help cover the bill, but fell short. “No other cigarette tax revenue will be used for stadium financing,” Frans said. “It’s a one-time shot.”