Minnesota Is Making Bike-Friendly Cities Across the State – Next City

Minnesota Is Making Bike-Friendly Cities Across the State 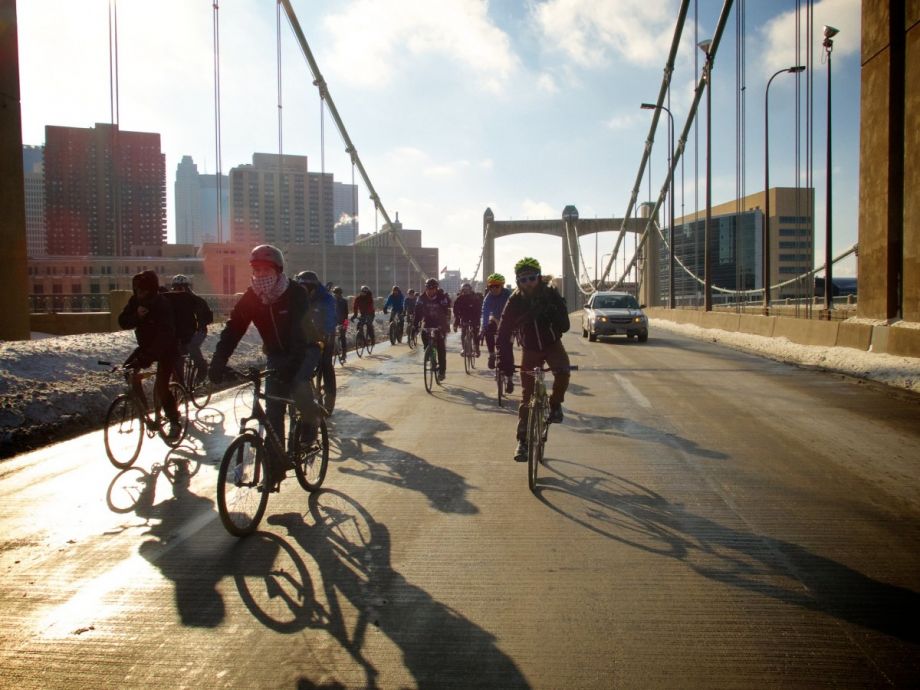 Minneapolis, Minnesota, consistently ranks in the top 10 for best biking cities nationwide, but the state isn’t content to stop there — a statewide effort is making communities across the North Star State more bikeable.

But rather than focusing just on infrastructure, the Minnesota workshops take a wider look at helping communities approach becoming a more bikeable city. Since the program’s inception, 28 communities have achieved the designation of Bicycle Friendly Community.

“We took [Michigan’s process] and made it bigger. We focus on the benefits of biking, bike education, and biking as transportation as well as biking as public health — a way to get physical activity in daily life,” explains Nick Mason, deputy director of the Bicycle Alliance of Minnesota (BikeMN), which partnered with the Minnesota Department of Transportation and the Department of Health to offer the workshops.. “Our goal in this partnership is working through policy systems and environmental change to make long term impacts.”

In order to host a community workshop, cities have to go through an application process.

“We are looking for communities that are at the point where they’ve done a bit of work and have a few people who are excited but who haven’t really had the momentum to get totally off the ground yet,” says Kate Matusinec, a Minnesota GreenCorps member serving as BikeMN’s community workshop coordinator. Acceptance in the program also requires written support from an elected official and a city engineer “to ensure that they show up,” Mason adds. “Fundamentally, this is about bringing your community together and making sure all of the different stakeholders are in the room and that you have decision makers in the room as well,” he says.

The workshop planning process begins months ahead of time and covers everything from the logistics of event planning to identifying local destinations that should be considered for bike access, from low-income housing to community swimming pools.

Once the day of the workshop arrives, stakeholders start with a bike ride through their community, designed by BikeMN to highlight both the biking achievements the city has made as well as areas that could use improvement. The rest of the day entails hefty idea generation and crafting six- and 12-month action plans focused on what they call the Six E’s: engineering, evaluation, education, enforcement, encouragement, and equity. “The whole idea is building up local community teams so that they can make the change. We’re there, but we’re leaving. What can we do to make things move forward when the workshop is done?” Mason says.

The success of the program relies heavily on the unique qualities that each partner brings to the table. City engineers are most interested in learning from MNDOT, for example, while a tourism-focused attendee might not be chiefly concerned with public health. It’s the coalescing of all three partners that makes the magic. Even the consistent supply of service members from the Minnesota GreenCorps plays an important role in ensuring the workshops continue.

“We all have our own roles and when we’re all there together, it’s hard to ignore that joint messaging — basically that biking improves the quality of life so that people want to live there and spend money there,” Mason says.

MNDOT focuses on “sharing resources on engineering and how communities can think about different resources that make it easier for people to bike,” says Jake Rueter, a bicycle and pedestrian planner with MNDOT. “We talk about reinforcing positive behaviors and touch on how teachers, coaches, parents, mentors and peers can work together to establish a culture of what it means to be a person who bikes safely.”

On the health department side, “the reason we got involved in this work is because we know that when we think about … health outcomes, we know that a community in which a person lives, the built environment that makes it up is a huge factor in whether or not someone has the opportunities to live a healthy life,” says Emily Smoak, a principal planner at the department. “By focusing on the transportation part of living an active life, you’re able to find shared goals,” she says of the partnership.

The other element that has been integral to the workshop’s success has been the enthusiasm and preparation of the cities and towns that have participated.

Walker, Minnesota, population 941, is the smallest town that has held a Bikeable Community Workshop, yet one that has perhaps achieved the most because of it. Before the workshop last year, Walker was “a community that I would say historically hadn’t considered biking as a transportation opton,” says Smoak. “We had a conversation around everything from bicycling as a tool to improve equity to ensure that everyone has an affordable way to get where they want to go to talking about it as an economic development tool.”

Since then, Walker’s mayor, Jed Shaw, has become a co-chair of the Minnesota Mayoral Active Transportation Caucus and the city has earned its bike friendly city designation — an integral part in the city’s effort to diversify its economy — by expanding its rails-to-trails system to over 200 miles and recruiting ten companies to become bike-friendly businesses. Eight made the cut and today Walker has the highest number of bike-friendly businesses per capita in the nation.

“Our economy is very much tourism based,” Shaw says, speaking largely of Walker’s extensive rails to trails system. “After logging had petered out, we switched to tourism, primarily outdoor tourism like fishing and hunting. But over the course of the years if you rely on those natural resources too much and they have a bad year, the economy can take a hit,” which is a major reason the city became so interested in improving biking.

“We also just do it for fun — it’s not just business all the time. I ride the trails constantly and it’s just fun,” he adds.