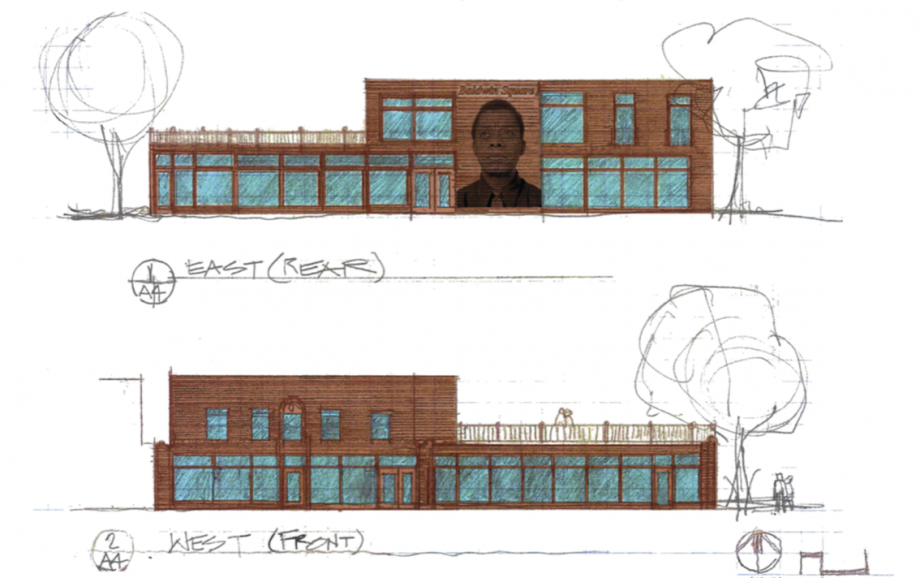 When Jamil Ford was a kid, he built forts out of scrap wood, inside and outside his family’s house near 17th and Irving Avenues on the north side of Minneapolis. The last fort he remembers building was a two-story masterpiece in the backyard. He later went to North Community High School, a public high school that offered two years each of architectural drafting and engineering classes. A guidance counselor noted his precociousness, and connected him with the architecture firm HGA, where he interned his junior year. Today, he’s back to building on the north side, with his own firm he co-founded in 2010.

“I grew up in a community where there was lot more family and owner-occupied businesses. That’s one of the things I miss in the community, and one of the reasons I started this firm in north Minneapolis,” says Ford, who still lives on the largely black north side. “People who were doing the work in the community were doing the work and just leaving, and didn’t have to deal with the repercussions of bad design. I can’t just walk down the street and put lipstick on the pig. People will call me out.”

Ford’s firm, Mobilize Design & Architecture, recently won a first-of-its-kind request for proposals from the Minneapolis Department of Community Planning and Economic Development to redevelop a property containing two vacant buildings about two miles north of where Ford grew up.

The request for proposals was the first to use documentation designed to be more welcoming for newer developers, especially minority- and women-owned developers, that have never worked with the city before. The process was also the first to incorporate more resident feedback every step of the way—the city even co-sponsored an open house after proposals were submitted, allowing residents to meet developers, and to look over and discuss proposals with them and the city, trade-fair style.

“It was very inspiring, knowing that there was great turnout [at the open house], from young to old, families, single individuals, diverse in terms of various backgrounds,” Ford says.

Ford’s winning proposal includes a restaurant with seating for 125 people, bookstore/coffee shop, office space, and art gallery/community center . The property will be cooperatively owned and managed by Ford’s firm and the other businesses in the buildings.

“We want folks that live and reside in the community to own it, we want to provide livable wage jobs, and even with the bookstore café, we’re already looking at some different machines that can publish or print books so we’re not having a large inventory on site and we can provide more books that people want in the community,” says Ford. “This would potentially be our chance to go after something that could have impact in a number of different [ways].”

Ford’s team named the project Baldwin Square, in honor of James Baldwin. The buildings sit at 42nd and Fremont Avenues, a former streetcar stop that’s now a bus stop. Soon, the corner will become a stop for a planned bus rapid transit line. Ford hopes the combination of Baldwin Square and the new bus rapid transit line will help restore some of the community spirit he remembers from growing up.

“I didn’t grow up with the streetcars, but I remember how friendly the community was,” says Ford, a father of two daughters and a son. “I could jump on the bus and go downtown at the age of 12, which I probably wouldn’t allow a 12-year old right now to do.”

The north side of Minneapolis is poorer and blacker than most of the rest of the Twin Cities. The Baldwin Square buildings, built in the 1920s, sit near the border of two census tracts where the Census Bureau estimates median income to be around $32,500, less than half that of the Twin Cities metropolitan area at $70,922. The census tracts are also around 41 percent black, compared with 10 percent black across the metropolitan area.

Community ownership began with the vision for the site. After acquiring the tax-forfeited property, instead of going straight to developers with a request for proposals, the city went first to the community, attending meetings with residents to explain what zoning allowed on the lot and to gather ideas from residents about what they wanted in the space. The project was also the first that the city put up on Hoodstarter, an independent online platform that allows users to propose and vote on ideas to fill vacant spaces in the Twin Cities. The future Baldwin Square site got 18 proposed ideas. A coffee shop got the highest number of votes.

The city used those early discussions to shape the site’s request for proposals. Such documents are typically wordy tomes filled with legal, planning, and architecture jargon, which can be a barrier to developers without as much experience working with the city. The request for proposals in this case was, instead, a 23-page presentation with maps and timelines laid out in more user-friendly fashion. It went out to developers in November 2016, with a timeline for the participatory evaluation process going into 2017.

As explained by Beth Grosen, business development senior project manager at the Department of Community Planning and Economic Development, the city doesn’t have the authority to limit requests for proposals exclusively to minority- or women-owned developers, but it was their hope that a more welcoming and more transparent process could help tip the scales in the direction of newer firms who may be more responsive to community needs but haven’t had experience working with the city before.

“There had been some earlier feedback from earlier city [requests for proposals] that the process was too cumbersome and really difficult for somebody that hadn’t been part of it to do it,” says Grosen.

Ford and his team appreciated the city’s work. Since the city had already surveyed neighbors about what they wanted to see in the space, it was easier for Mobilize Design & Architecture to tailor its proposal.

Meanwhile, in 2016 the city also launched its Developer Technical Assistance Program, to help small, woman- and/or minority-owned developers to take advantage of opportunities available from the city. Ford was one of the early graduates of the 12-hour training course. The Department of Community Planning and Economic Development continue to offer the courses every year.

Five of the seven proposals submitted for the future Baldwin Square site ended up coming from minority- and woman-owned developers, including Ford’s. Four of them were announced as finalists in spring 2017. The city invited finalists to an open house, organized in partnership with the Webber-Camden Neighborhood Organization.

“The more we started engaging and talking with folks, the more we felt like this was a project that had to be accepted by the community … in order for it to thrive. Speaking to the residents [at the open house] made me feel good,” Ford adds.

On the financing side, making cooperative ownership and community-tailored businesses feasible in a low-income, largely black community demands as much creativity in financing as it does in planning. When you’re not just looking for whichever tenants can pay the highest rent, but rather what will make a project best reflect a community’s ongoing needs, you need to scrap and scrounge for every available subsidy.

With the project financing being finalized this month, according to Grosen, the city anticipates providing a participation loan (matched dollar-for-dollar from a private bank) of up to $75,000, another low-interest loan up to $500,000 from the city’s “Great Streets” program for commercial revitalization, and perhaps some grants or loans for transit-oriented development. A $68,000 slice of a state grant to the city for hazardous waste reduction will pay for asbestos removal and other clean-up needs at the site.

Meanwhile, Ford is currently in talks with Sunrise Banks, a local bank and community development financial institution, to use federal New Markets Tax Credits to subsidize the lion’s share of the $3 million or so in anticipated development costs. Ford’s firm has worked on other north side projects with childhood friend and former NBA player Devean George, financed by Sunrise Banks through the New Markets Tax Credit program. Fortunately, the program just barely survived the GOP tax cut bill, though it is only currently authorized for another two years.

Grosen remains optimistic. The financing, staffing, and documentation from the city remain available for future projects to take the same participatory tack, from the developer technical assistance program, to the more friendly request-for-proposal model—including the open houses for finalists.

“We’re expecting to do more of these kinds of deals,” she says, also mentioning the new mayor and five out of thirteen council members who came into office this month. “There’s great interest in equity and reducing economic disparities. I believe there will be continued interest from elected officials in continuing these efforts.”