Minneapolis Church Fights for Solar for All – Next City

Minneapolis Church Fights for Solar for All 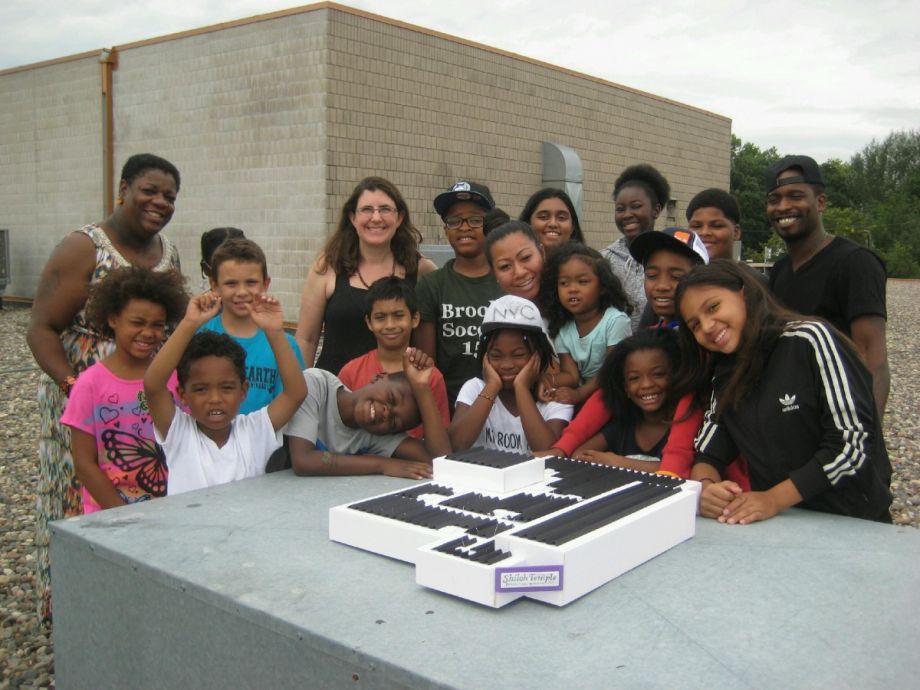 Kids in the Just B Solar camp on the roof of Shiloh Temple International Ministries, checking out a model of the soon-to-be solar array (Credit: Just B Solar)

When Minnesota passed the Solar Jobs Act in 2013, Julia Nerbonne, executive director of Minnesota Interfaith Power and Light (MNIPL), was thrilled. The nonprofit, which works to build the climate movement in faith communities, had worked hard advocating for the legislation. The act promised to vastly expand solar in the state, in part by requiring that Xcel, Minnesota’s largest investor-owned utility, create a community solar program. That would allow residents who can’t take advantage of new solar incentives to install panels on their homes — because their roof is poorly positioned, or they don’t own their own homes — to buy into solar gardens instead. A customer would be credited on their utility bill for the electricity generated by the solar panels they own, even though it’s off their property in a shared array.

“[But] when you’re busy passing legislation, you don’t really know what the practical aspects will be,” says Nerbonne. In the first month that Xcel was accepting RFPs, about 15 companies applied. Nearly all of them required credit scores of 700 or better to be a customer, says Nerbonne. “More and more it became clear that these arrays were really going to be only for wealthy people or people with really good credit,” she says.

That seemed unconscionable. The arrays promised to cut customers’ utility bills from month one. “Can you imagine saying to a group of people, ‘sorry, only rich people have the capital to be able to save money’?’” Nerbonne asks.

So MNIPL put together an RFP of its own to find a company that would build solar arrays for people of faith communities, continuing a statewide trend of churches initiating solar projects following the legislation. Minneapolis-based Cooperative Energy Futures won the bid, and joined with MNIPL and several other partners to create the Just Community Solar Coalition. Their first project, a solar garden atop Shiloh Temple International Ministries in north Minneapolis, will start construction this fall. A 200+ kw array, it’s expected to generate enough power to offset the electricity use of about 50 homes in north Minneapolis, a largely black and low-income neighborhood.

Arnetta Phillips, community outreach director at Shiloh Temple International Ministries, has been communicating with congregants about the project. She says it’s not a stretch for people to understand why a church would get involved with solar power. “We do whatever we can, no matter what the area is. If it’s something that’s going to benefit the community then we want to be involved with it,” she says.

It’s not always easy explaining the fine print though. Because the power from the array will still feed into the general grid, customers will receive two utility bills: a regular Xcel bill registering their total monthly usage, and a bill from Cooperative Energy Futures showing a credit to that bill for the solar energy generated that month. The coalition hopes to convince Xcel to consolidate them. In the meantime, explaining the situation is “slow going,” says Phillips. “When you are trying to produce something to people that’s new and it’s never been heard of, it’s hard to sell people on that stuff.”

But the majority of shares have already been purchased, with Shiloh buying into the project as well. Clients have the option of paying for their share up front, or in monthly installments with interest, like paying off a mortgage. North Minneapolis residents, including a few congregants, have trained with Jamez Staples of local solar installation firm Renewable Energy Futures to install the panels. One of those installers, Keith Dent, ran a solar camp for kids at Shiloh this summer, where they baked in a solar oven and visited a solar panel manufacturing plant.

The last missing piece is the financing. The Just Community Solar Coalition’s original purpose — to insure that even low-income people and people with bad credit scores could buy into solar gardens — is making it a challenge to attract financing. Nerbonne says the coalition has found that most groups who finance renewable energy projects want large arrays and large projects: 5 megawatts to Shiloh’s 200 kilowatts, $10 million to Shiloh’s $500,000. And the coalition wants to use half debt financing, so that the community will own the array, not the investor. There’s an offer on the table, says Nerbonne, but it’s not what they’d hoped.

Still, she says, “Every step along the way, it’s an opportunity to educate people about how you have to bake equity into the system rather than clean up afterwards.” The Just Community Solar Coalition operates on four pillars with equity in mind: closing the employment gap, access to solar for all, protecting natural systems and changing the energy story.

“We want to make sure that as the community solar market develops, that it helps people tell a new story about their involvement in the energy sector, so people start thinking about themselves as the developers of the energy and not just consumers of energy,” says Nerbonne.

Particularly with Minnesota aiming for 25 percent renewable energy by 2025, Dent of the Just B Solar camp says it’s crucial to teach people about opportunities in solar now. “It’s something that’s in the very near future,” he says. “It’s important for [youth] to know what they’re coming into, and how they can be a part of it.”