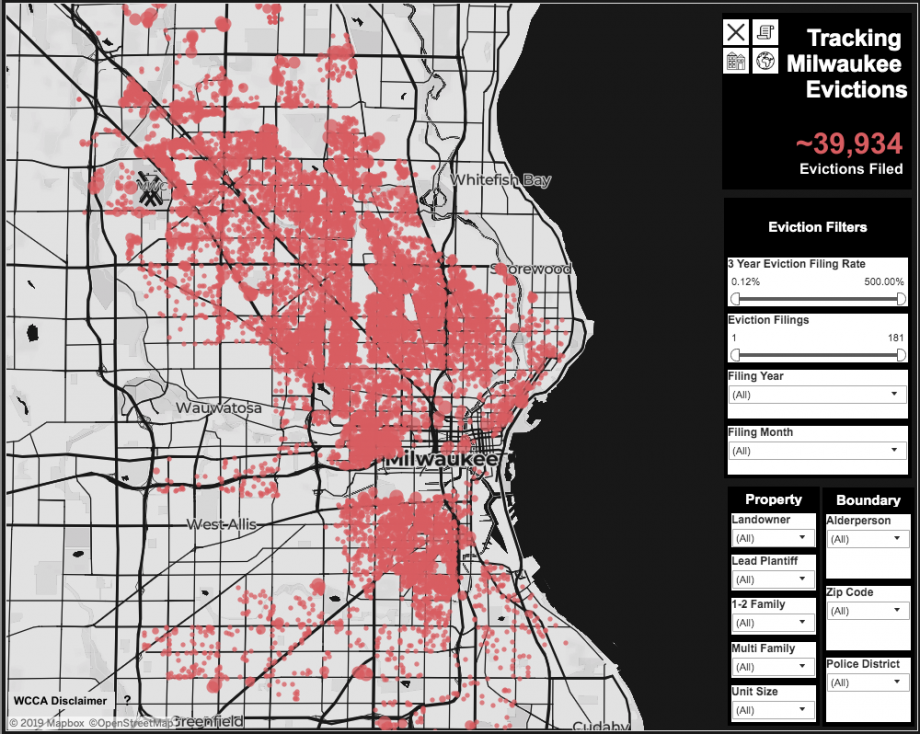 (Map by City of Milwaukee Evictions)

According to the Milwaukee Journal Sentinel, evictions are more common in low-income areas and areas of color. Though the data show that non-payment is the leading cause of evictions, tenants often withhold payment because proper repairs are not being carried out. Many tenants do not report bad housing conditions because they fear retaliatory evictions, reports the Journal Sentinel.

“We knew that eviction was a problem, we knew it was a significant problem … but one of the things that we lacked as a community was a way to assess that problem, to see it in more granular detail,” Ralph Ramos, leading attorney for Legal Action of Wisconsins’s Eviction Defense Project told a committee of the city’s Common Council.

The report also predicts evictions in Milwaukee will rise in the coming years. In May alone, 1,184 evictions were filed.

University of Iowa students and Iowa City residents have banded together to create the Iowa City Tenants Union, reports KWWL News. In a press release, the union wrote that “the tenant-led organization seeks to connect renters and provide them with the resources they need to fight for their rights.”

According to the Daily Iowan, the union is working to collect information on housing issues from renters every month. Among the biggest issues were maintenance neglect, security-deposit theft, increases in rent, and sexual harassment.

Weilein is also working with the Inside Out Re-Entry Community, a resource center dedicated to educating and aiding returning citizens. Weilein wants to educate returning citizens so they are not taken advantage of by landlords, reports KWWL.

The New Orleans City Council approved changes to its short-term rental plan Thursday. The changes distinguish between residential permits — in which a homeowner can sublet part of their primary residence — and commercial permits — which allow commercial operators to run more than one rental unit at the cost of higher permit fees.

The city also implemented nightly occupancy fees, which was one of the options recommended in a recent report from consulting firm HR&A Associates. However, according to The Lens, the firm has worked with Airbnb at least four times since 2012, posing what some advocates say is a large conflict of interest.

The council also rejected a proposal by councilwoman Kristin Palmer, who had suggested that large buildings provide one affordable unit for every short-term rental in the building. The HR&A report found that such a requirement wouldn’t be “feasible” for short-term rental operators, The Lens reported, and discouraged council from pursuing that option in favor of occupancy fees.

Breonne DeDecker, a member of the Jane Place Neighborhood Sustainability Initiative, and opponent of short-term rentals, told The Lens, “Obviously this is a clear conflict of interest … HR&A are not neutral actors and their paid ‘studies’ demonstrate as much.”

Airbnb said in a statement that the company is not currently working with HR&A.