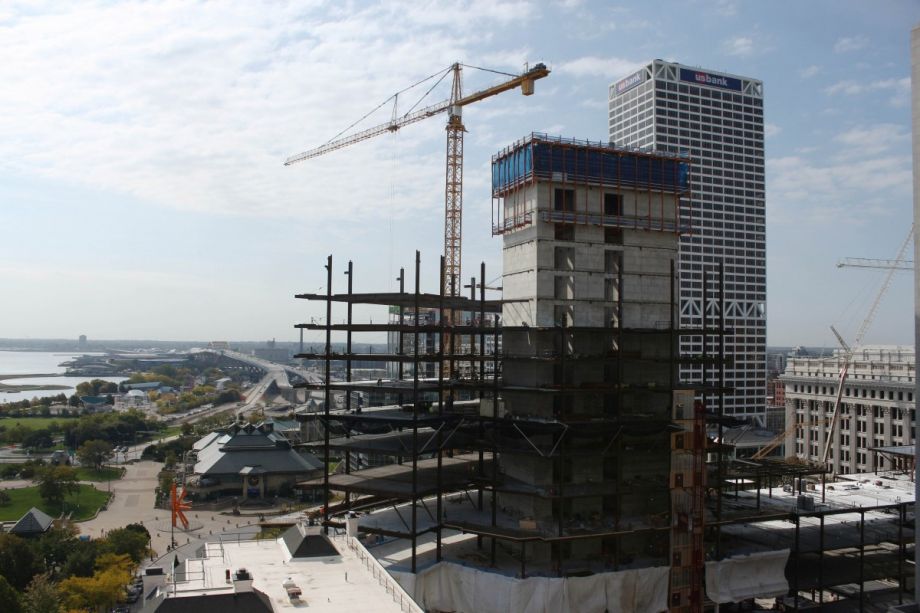 This Oct. 8, 2015 photo shows a new office building for Northwestern Mutual under construction in Milwaukee. In just a few years the core of Wisconsin’s largest city has been transformed by the investment of more than $1 billion, the labor of thousands of workers, the re-routing of two freeways and track of one new streetcar line that opened one week ago. (AP Photo/Carrie Antlfinger)

The line’s first phase follows a 2.1-mile route from the Intermodal Station west of the Milwaukee River through downtown and the Third Ward to Burns Commons near Lake Michigan. The streetcar, which is operated by Transdev, will be free to ride for its first year. The Milwaukee Journal Sentinel reports that the free rides are part of a 10-year, $10-million sponsorship deal with Potawatomi Hotel & Casino.

A Federal Transit Administration grant picked up $55 million of the line’s $124 million price tag, with the rest coming from local tax financing districts. The line’s $3.2 million annual operating cost will be covered by fares (after this first year), advertising revenue, federal grants and revenue from city parking meters and lots. Cars run from 5 a.m. to midnight Monday through Friday, 7 a.m. to midnight Saturday and 7 a.m. to 10 p.m. Sunday.

Milwaukee Mayor Tom Barrett said at the opening ceremonies that expansion is already being studied. A proposed second phase would add a loop to the east of Milwaukee Street near where the north-south line turns west to head to Intermodal Station; the loop would connect the Phase One line with the Downtown Transit Center.

The restored PCC streetcars working El Paso’s new heritage trolley line are preparing to take on passengers again. According to a news report from KTSM, El Paso city representatives say that the line is ready to open to the public and should begin service Friday afternoon, Nov. 9.

The city took control of the line from the Camino Real Regional Mobility Authority this week after construction crews finished their work. Four of the six vintage streetcars that will operate service are on the property. Brookville Equipment Company in Pennsylvania, which also built the new Milwaukee streetcars, performed the restoration work in El Paso. The restored streetcars have two features the originals lacked: air conditioning and Wi-Fi. Sun Metro will operate the line.

City Representative Peter Svarzbein said that the line will be free to ride on weekends for its first year of operation.

According to a story in The Oakland Post, Alameda County is placing its own bet on a new, experimental form of light rail transit. It is one of the two East Bay counties that have joined together to explore rail service to combat worsening traffic congestion.

The Alameda County Board of Supervisors has approved a resolution that gives CyberTran International and other companies the go-ahead to seek funding to build and run demonstration “ultra-light rail transit” (ULRT) service in the county, which is home to both the East Bay hub city of Oakland and Berkeley, where the University of California’s northern flagship campus is located.

CyberTran has been developing this new form of light-rail transit for several years; it recently moved its research and testing facilities from Idaho, where inventor John Dearien lived, to Richmond in neighboring Contra Costa County in order to be closer to markets that might be able to put his concept to the test.

CyberTran’s ULRT attempts to solve one of the main problems of fixed-guideway transit, that of offering direct service from origin to destination with no intermediate stops. Its operation resembles that of a horizontal elevator more than it does a conventional light rail transit line: Passengers would summon vehicles at off-line stations by entering their destinations; like the cars on newer elevator systems, the ULRT vehicles would then deliver passengers to their destinations without making intermediate stops unless traffic required them. Idle vehicles are stored at the stations, and on- and off-ramps allow them to reach line speed before merging with the main line.

The electric cars would operate on guideways covered by solar power panels capable of producing a megawatt of electricity per mile, more than enough to power the cars. Surplus power would be fed to the grid.

Alameda County Supervisor Nate Miley has championed ULRT over the past few years, and the vote signals that enough of his fellow supervisors agree with him.

Alameda and San Joaquin counties had previously formed a joint authority, the Tri-Valley-San Joaquin Regional Rail Authority, to explore rail transit service connecting the Dublin BART station with the city of Tracy in San Joaquin County. Diesel multiple-unit trains are being considered for that route. The ULRT system Alameda County has authorized would address mobility issues within Alameda alone, but CyberTran President Dexter Vizinau cited other needs a ULRT system could handle, including providing additional trans-Bay rail service via a new crossing near the Dunbarton Bridge.

According to the article, ULRT would be cheaper to build and run than conventional light or heavy rail, but the report gave no cost estimates.