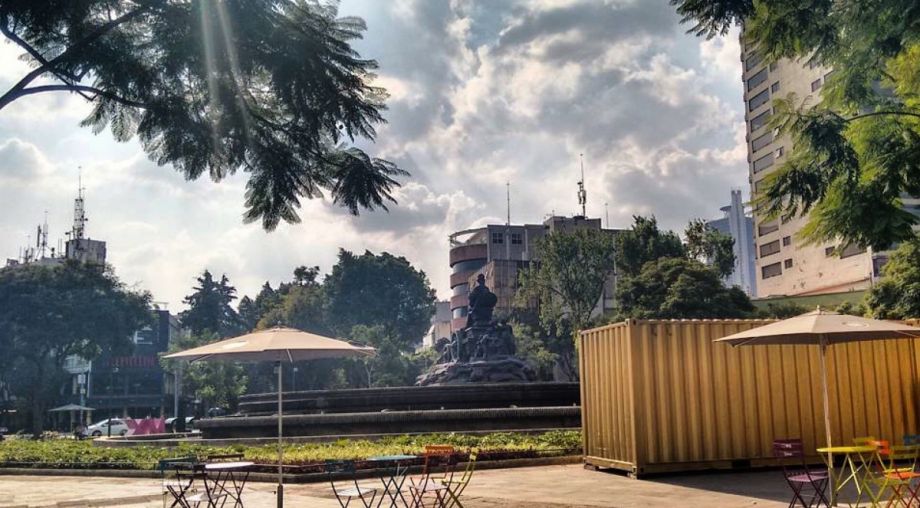 What do Newark, New Jersey, and Milwaukee’s Amani neighborhood have in common? They’re both high-crime, high-homicide and highly policed, and right now, a public park in each is hosting a gold-painted shipping container designed to facilitate conversations between the two cities about criminal justice and incarceration. The “portals,” each equipped with high-speed, life-size video conferencing, allow a person in Newark’s Military Park to speak as though standing face to face with someone in Moody Park in Milwaukee. Created by Amar Bakshi and his Newark-based art and technology collective Shared Studios, the project has linked up distance places like New York City and Tehran, and Washington, D.C. and Herat, Afghanistan. Between 15 and 20 are operating around the world right now. The Milwaukee-Newark Portals — both installed in April — are the first to connect two U.S. cities.

“Portals as an initiative is really about creating a space that has some indeterminacy to its purpose, which I think is like another way of saying, to create a public space,” says Bakshi.

Visitors can reserve a time online or in person to spend 20 to 30 minutes speaking one-on-one with a person in a city halfway across the globe — or in the case of Newark and Milwaukee, in a city facing similar challenges in the same country, just 900 miles away. In an age of unprecedented connectivity, Bakshi points out that we still primarily use the technology at our disposal to connect with people who are similar to us, or within our existing networks. “But when is there the moment, the context, to connect with someone not like yourself?” he asks.

Framed that way, “it’s fairly obvious in certain senses that our American cities are as divided as the Iran-U.S gulf,” he continues. “You could even walk it back to two sides of the same street.”

Connecting with strangers, even strangers who live on our block, isn’t just about access, but about context, he points out. Yes, we could walk to another neighborhood and knock on a door, but once we got there, what would we say? The portals create a context for interaction, a space in which outcomes are not predetermined, conversations are private, and the only purpose for coming together is get to know one another.

Participants are always presented with a prompt (though Bakshi notes they often ignore it) agreed upon by the portals’ curators, staff on either end who coordinate programming at every site. The original prompt — “What would make today a good day for you?” — aimed to be specific, aspirational and precise, says Bakshi, while offering a tellingly mundane glimpse into the lives of others. With the Newark-Milwaukee connection, the intention is to spur conversation on a specific topic — incarceration and criminal justice — by asking a broad question: “How has the criminal justice system affected your life?”

The question has particular urgency and poignancy for these two communities. Amani has the highest incarceration rate in the country, and Newark consistently ranks among America’s highest-crime cities. Just last week, Bakshi says a man wandered over to the Newark portal, having just been released from the county jail. People are speaking about their time in prison, about being victims of crimes, on their ideas for reform. One man who has lost multiple loved ones to gun violence told a local CBS news crew about his experience in the Portal, “For me it’s a like a form of therapy, a way to connect with people I never thought possible or could happen.”

In addition to the one-on-ones, portal curators help facilitate events and programming for wider audiences. Curators are usually from the communities where they’re based, and work to find uses for the portals that will benefit local groups, whatever their needs and interests might be. A cross-city jam session was recently held in the Milwaukee and Newark portals, with artists and musicians in each space collaborating on songs. Precious Lives, a Milwaukee-based radio and podcast series about young people and gun violence, used the portal to record a recent episode, centered around a conversation between two young men.

The portals can also be used to host public events, with a projector set up outside streaming the collaboration happening within. The portals have been used to connect classrooms, to host panels and lectures, to create collaborative theatrical performances, and even for an urbanism night connecting people working on similar issues in San Francisco and Mexico City.

Bakshi says as he sees it, the portals’ real power lies in these recurring and repeated connections: a Newark classroom that talks to Milwaukee every week, or city officials who brainstorm regularly on their various solutions.

Any entity — from universities to hospitals to business improvement districts — can request a portal, though they must be prepared to invest the necessary resources, time, and community- and awareness-building. Shared Studios provides no funding, instead working with interested communities to source the necessary capital, often by connecting them with grants and other forms of support. Curators are paid for full- or part-time positions, sometimes employed and paid by Shared Studios and other times by local institutions. The MacArthur Foundation bankrolled the whole two-month launch in Milwaukee. Now community groups hope to find funding to keep the portal after that. (MacArthur provides funding support to Next City.)

In some places, like Herat, Afghanistan, curators have devised programming that helps fund the portal’s permanent placement. An Afghan professor at Herat University, where the portal is located, teaches Cold War history to kids around the world, paid for by the classrooms that import him. Afghan entrepreneurs can also pay a small amount to talk about their business ideas with venture capitalists in Silicon Valley.

In addition to carving global “wormholes,” as Shared Studios refers to in their mission, Bakshi says the portals also contribute to their local environments. “A small addition to an existing public space can open up a whole range of new uses that I think both vitalize the space in new ways, but also help revitalize it the way it currently is,” he says. People sit outside the portals afterward, talking to their neighbors about their experience, in this new context the portal has created. “It sparks that dialog locally, and programmatically it creates ideas across institutions, and I think really strengthens the public space,” says Bakshi.

Ben Donsky, vice president of the Military Park Partnership, says that’s a major reason the nonprofit was excited to host a portal, and to waive the venue fees for its two-month stay, during which Newark will be connected not only to Milwaukee but also to portals in the global network. “We view our mission as the operators of Military Park as helping facilitate serendipitous interactions between people who may not have known each other,” he says. “This was an interesting way to help us fulfill our mission but apply it on a global scale, in a sense, by helping to build social capital, whether it’s between Newark and Milwaukee, or Newark and Kigali or Newark and Afghanistan.”

The strength of the Milwaukee-Newark connection in particular has been surprisingly powerful, says Bakshi, and has given him hope that the portals as an idea have a real durability, able to provide more than a novel glimpse into the lives of the very foreign. Of the domestic pairing in an increasingly divided country, Bakshi says, “I think it has some power that I didn’t expect.”