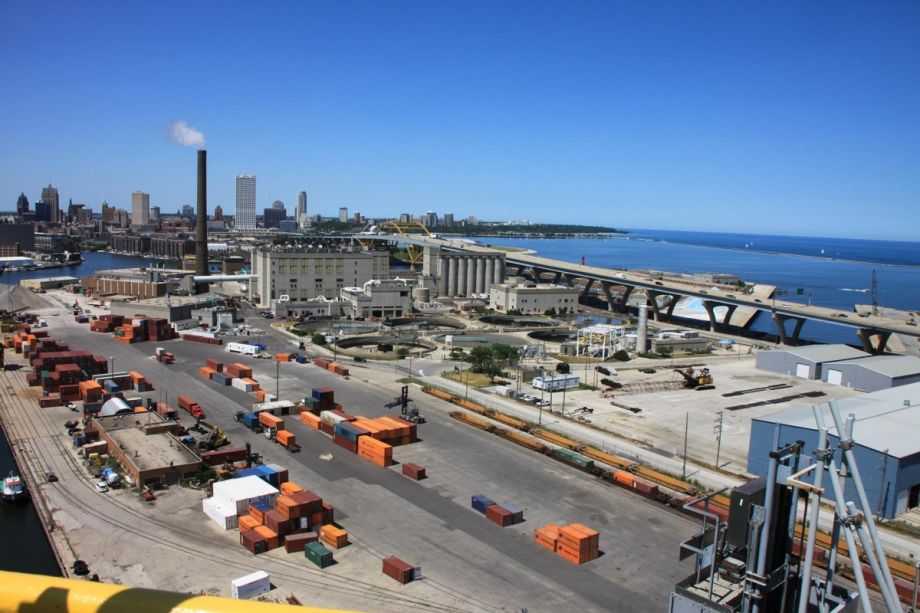 Milwaukee is looking to solidify its title as “Fresh Coast capital” by redesigning its industrial inner harbor area into a mixed-use, pedestrian-friendly, eco-conscious new neighborhood: the Harbor District. The initiative, led by nonprofit Harbor District Inc., is seeking ways to retain the area’s vital industrial uses and also complement the neighboring Water Technology District, where freshwater research facilities are clustered and the city is experimenting with green infrastructure like purple pipe.

Lilith Fowler, executive director of Harbor District, says the rebranded area could also serve as a showcase for sustainable water solutions, a home to water-related businesses, and a connection point between residents and Milwaukee’s industrial past and present. It also provides opportunity to restore a damaged landscape. A protected river channel on Lake Michigan, the inner harbor has been dredged, filled, straightened, channelized “and kind of abused into oblivion,” says Fowler. Thousands of acres of rice marsh once covered the area, providing habitat to wading birds, fish and beavers. Today, as for most of the last century and a half, it supports shipping, manufacturing and other industrial uses. Cargo ships are loaded and unloaded; a grain elevator that’s been in continual operation since 1916 still serves area farmers, moving corn and soybeans out and barley for Milwaukee’s brewers in.

Fowler says the idea is not to displace these economic engines, but to make both operations and land use more efficient so the area can support other uses too. For all of the harbor’s active industry and manufacturing, there are also numerous sites in various stages of vacancy and underutilization, like a city-owned plot that until recently hosted an 8-story pile of coal — even though Milwaukee’s Valley Power Plant doesn’t run on coal anymore.

The property, directly across from the University of Wisconsin-Milwaukee’s School of Freshwater Sciences, will become available next year when the city’s lease with the current user ends. At a Harbor District-hosted design charrette last fall, four studios focused on this parcel in addition to the entire neighborhood’s redevelopment. Studio Gang, Wenk Associates, DTAH and PWL Partnership brainstormed solutions to the primary challenges: creating better transportation access, melding mixed uses without compromising safety or industry, and restoring an ecosystem threatened by decades of use.

“It’s trying to do almost the impossible in a little space there,” says Jason Wegman of Vancouver-based PWL Partnership, a challenge he says that made the project all the more appealing. Wegman has witnessed the transformation of Toronto’s waterfront, a redevelopment that more or less removed industry to make way for residential towers. During public engagement sessions conducted by Harbor District, long-term residents specifically said that they wanted to retain their neighborhood’s gritty, mixed-industrial character, musing about what a shame it would be to lose that to luxury condos, says Fowler.

Three of the four design teams proposed concentrating industrial uses on Jones Island, which forms the harbor’s eastern side, and allowing new development on the western bank. PWL didn’t recommend increasing residential at all.

The studio did propose turning the former coal storage site into an incubator space for businesses associated with the School of Freshwater Sciences, complete with an experimental wetland landscape. Research teams could conduct restoration tests on the plot that could inform projects elsewhere. PWL also recommended beginning sustainability considerations far upstream: Instead of spending significant financial resources to dredge the harbor of sediment, as is done now, PWL proposed strengthening the river’s entire watershed to reduce sediment flow in the first place.

Restoration and sustainability were key aspects of all the firm’s designs. Studio Gang proposed transforming the harbor’s outer breakwater — an aging, three-mile-long concrete barrier that protects the harbor from Lake Michigan’s waves — into an ecological structure made up of rock, sheet pile and restored wetlands. All four increased pedestrian access to the waterfront, proposing parks and public spaces along it. To draw visitors during the time it will take to create those spaces, Denver-based Wenk Associates recommended docking barges along the harbor that would be open to the public with swimming pools and beer gardens.

For now, the plans are largely inspiration for what’s to come, though Fowler says she is investigating the feasibility of many of their proposals. Harbor District just finished up a market study to identify what has worked for other urban waterfronts, and which types of businesses would be best suited to relocate to Milwaukee’s. Attracting and retaining more water-related companies could be highly lucrative for the city; a study of the Water Technology District demonstrated that $211.6 million of investment in the neighborhood boosted property taxes by 16.6 percent.

Next the nonprofit will work with the city to look at who exactly will go where, and to begin planning the infrastructure and transportation network. The old rail lines that cut through the neighborhood make some vehicle access challenging: Trucks can’t fit under the low-clearance rail bridges, but it would be very expensive to raise them, and not feasible to lower the roadbed because of the marshy soil.

One of the first projects likely to be realized is the restoration of the last remaining 6.5 acres of that wetland, which are polluted and choked with weeds. Harbor District has a request into the EPA for funding to design a restoration plan for those public lands. The district is a mixture of private and public property, so Fowler says it’s up to the city to lead by example.

“The publicly owned pieces provide an opportunity to really set the tone for the rest of what happens in the area,” she says. Whatever final recommendations the nonprofit produces, “it has to be really a sales and marketing document as much as a planning document.” She estimates at least another year of planning ahead, and that implementation will be a 20-plus year project.