With Demolitions on the Horizon, Milwaukee Preservationists Seek Balance between History & Safety – Next City

With Demolitions on the Horizon, Milwaukee Preservationists Seek Balance between History & Safety 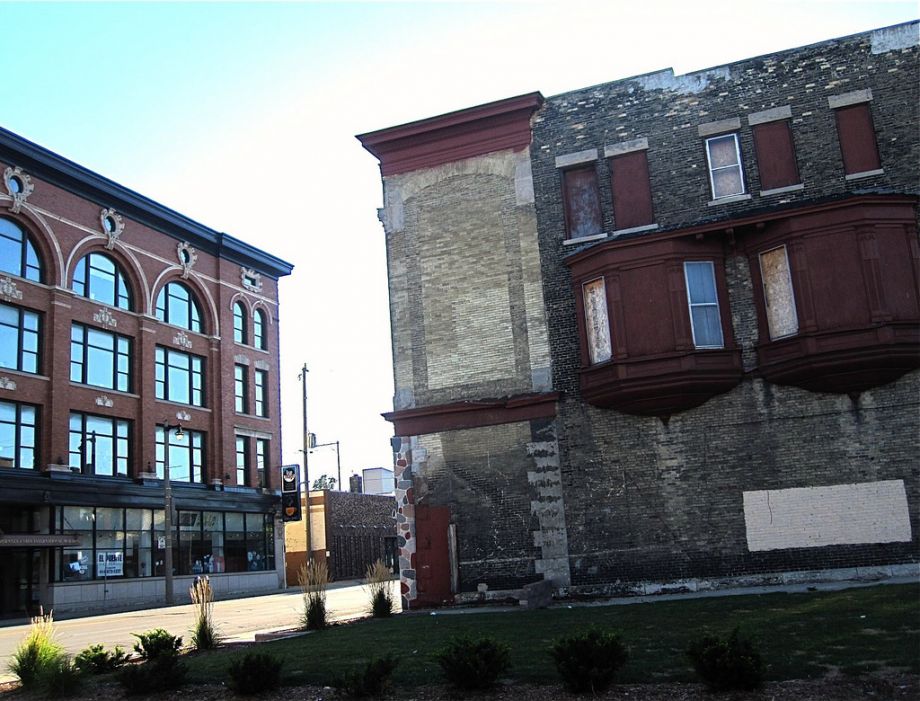 The city holds title on 1,300 houses it has received through foreclosure for back taxes, and has sold 291. But it can’t sell them all. Photo credit: chicagogeek on Flickr

Milwaukee does not want to be seen as a Rust Belt city. Although it’s in the Midwest, and its economy is anchored by two blue-collar industries — brewing and motorcycles — Milwaukee has lost only 20 percent of its population since 1960. The city has actually grown over the last decade.

As a result, Milwaukee never had to deal with abandonment and urban decay, at least not to the extent of other cities in the region. Then came the foreclosure crisis. For the first time in its history, Milwaukee had more empty houses than it knew what to do with.

“Prior to the 2008 meltdown, our inventory of foreclosed properties was only 150, and now it’s over 1,000,” said Leo Ries, executive director of LISC Milwaukee, which works to revitalize inner-city neighborhoods.

To deal with the blight, Mayor Tom Barrett is planning to spend $11.6 million to tear down 500 houses — the most ambitious demolition project Milwaukee has ever undertaken. But that has some preservation advocates questioning whether the backhoes will also be destroying part of the city’s history.

One reason Milwaukee has been so stable is that its housing was built to last for generations. In Detroit, Cleveland, Flint and Buffalo, bungalows were built quickly and cheaply to accommodate waves of factory workers. As those neighborhoods wore out, they were abandoned for suburbia. Milwaukee’s Germans built sturdy, graceful brick two-flats.

“A lot of these houses are old Victorian houses,” Ries said. “They’ve got hardwood floors, natural woodwork. Some of them still have their stained glass windows, but a lot have been stolen. At the turn of the 20th Century, these were middle class homes.”

Milwaukee’s situation is an example of a post-recession dilemma for urban preservationists, who will have to accept that not every house can be saved, without compromising public health and safety. Michael R. Allen, who directs the Preservation Research Office, a St. Louis-based historic preservation and architectural research firm, addressed the issue in this video.

The city appreciates that its housing stock “has good bones,” says Housing Policy Director Aaron Szopinski, but it has to balance preservation with public safety and market reality.

In many cases, neighbors are begging the city to demolish abandoned houses, because they’ve become targets for scrappers or hideouts for drug dealers. In a 150-foot radius around a vacant house, property values go down at least $7,000. And there simply is not a demand for housing in the neighborhoods hardest hit by abandonment. The city holds title on 1,300 houses it has received through foreclosure for back taxes, and has sold 291. But it can’t sell them all.

“The mayor and the Council would love for that to be the case,” Szopinski said, “but the market doesn’t work that way, and the financing is difficult.”

The city’s Neighborhood Services Department determines which houses will be demolished. However, Szopinski said, the city code allows historic status as a factor in determining whether a house will be saved. The city’s $2.3 million Housing Infrastructure Preservation Fund provides for securing and weatherproofing houses with historic character until someone buys them.

Milwaukee is especially interested in preserving houses in the Concordia/Cold Spring neighborhood, the city’s Gold Coast, where lumber and railroad barons built their mansions. In 2012, though, only six houses were rehabilitated through the fund, according to the Milwaukee Journal-Sentinel.

“Weighing preservation questions against public safety issues like demolition, condition of structures in very distressed or depleted neighborhoods — there’s no science to it, and I think this is really a sort of emergent area of interest for planners who may see preservationists intruding as a little bit of a nuisance, and preservationists who are learning what preservation really is, because we’re moving from ‘Thou shalt not’ to ‘maybe,’ and that’s a big leap,” Allen said.