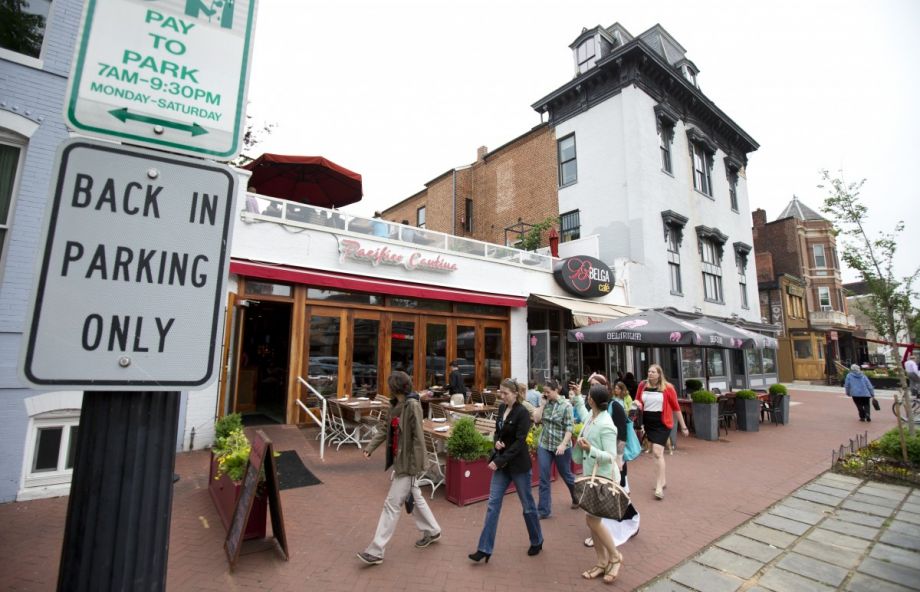 The National Trust for Historic Preservation reports that a mix of older, smaller buildings make for more vibrant, walkable communities, like on this streetscape in Washington D.C. (AP Photo/Manuel Balce Ceneta)

In the gentrification wars, preservationists are often pitted against affordable housing advocates, as is evidenced in the recent debates about height limits in D.C.

The preservation community argues that historic buildings create jobs, strengthen neighborhoods, expand prosperity and spur revitalization, and Stephanie Meeks, president and CEO of the National Trust for Historic Preservation, says there’s plenty of hard data to back that up. Meeks is currently working on a book that takes some of the findings from National Trust report “Older, Smaller, Better: Measuring How the Character of Buildings and Blocks Influences Urban Vitality” and expands on its themes. I spoke with her about the numbers, tomorrow’s preservationists, tax credits and more.

What are you doing to ensure preservation is a central strategy for urban development in cities?
We’re trying to develop new types of partnerships to help us get the word out. [We have a] partnership with the Urban Land Institute where we are working in several cities across the country to look at barriers for reuse of old buildings. Our partnership with ULI gives us access to a developer network, which is much deeper than our network has been to date.

We’re working hard to introduce millennials to preservation. We know from our market research that this group loves old buildings. Our research shows that many are involved in preservation activities: fixing up their own historic homes, volunteering, showing up in planning commission meetings letting their voices be heard. They’re active in preservation, but they don’t consider themselves to be preservationists.

You have, on one hand, people like Lance Freeman at Columbia University, who has done some recent research that says that residents are no more likely to move out of their homes when their neighborhood starts to improve than when it doesn’t. When the Federal Reserve Bank of Cleveland issued a report years ago, they found that living in an improving neighborhood improved the financial health of the original residents, so there can be benefits.

There are good examples across the country. In Macon, Georgia, they set out to revitalize a neighborhood of more than 500 residents with the very explicit goal of not displacing existing residents. They were successful in doing that by working with the city on things like property tax freezes, on making sure that the revitalization happened only in vacant homes or on vacant lots. So there are stories out there and ways to do that work that preserves the integrity of residents that are there today. It’s not all or nothing. It’s complicated. But I would say that it’s not always done well.

Are there other economic benefits of preservation in the form of jobs or workforce development?
Preservation projects are often more labor intensive than new construction. We have done some research over time that shows that repairing existing residential buildings creates about 50 percent more jobs than building new ones, because you have a lot more trades engaged.

How does outreach in cities about the tax credit program differ from what’s done in rural areas?
Our focus at the National Trust right now is protecting the Federal Rehabilitation Tax Credit, because we’re worried that in the face of comprehensive tax reform, which has been a cloud on the horizon for several years now — that this is the type of program that could go away. It is the type of program that has not needed to be reauthorized, which is on one hand a really good thing. On the other hand it’s a bad thing, because not enough people on Capitol Hill know about the program and the benefits of the program. That’s where we’ve been putting our energy over the past couple of years.

This is a credit that can be used everywhere. The National Trust has a for-profit subsidiary called the National Trust Community Investment Corporation. NTCIC does tax credit projects as their area of expertise. They’re working on projects all over the country, and they’re a great source of information for people looking to potentially using the tax credit.

We set out to test a theory that Jane Jacobs gave voice to in the 1960s. She said that neighborhoods need old buildings so badly that it’s impossible for cities to be vibrant without them. Of course we think that’s true and feel it in our bones, but sometimes we need empirical analysis to back up our work.