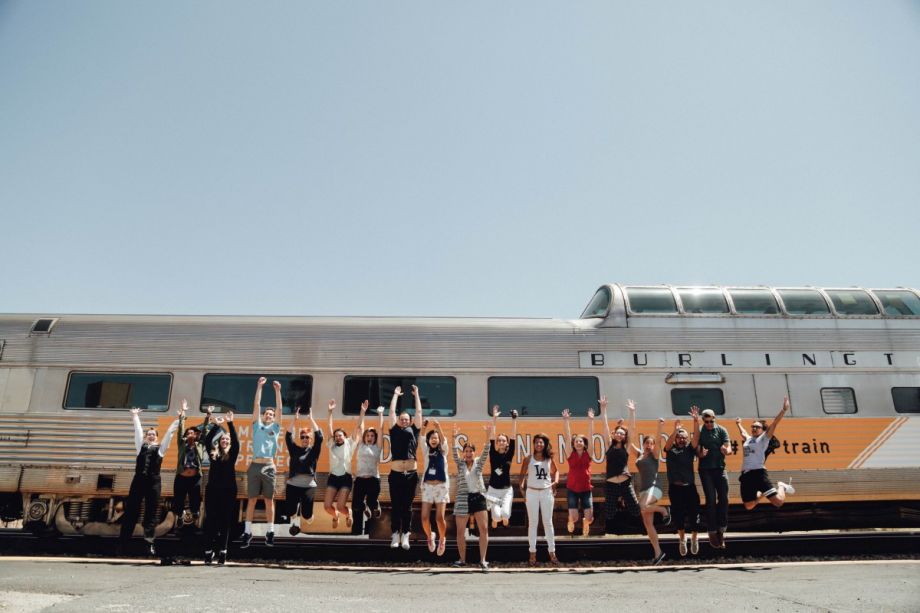 This is the true story of 25 strangers picked to live together on a train for 10 days, working together to refine and promote their social impact projects. It might sound like the plot of “The Real World: Amtrak,” but it’s actually the scenario guiding the Millennial Trains Project, which is making its third cross-country voyage this week.

From May 21st to 31st, a vintage train made of Pullman and California Zephyr railcars is carrying millennial entrepreneurs, community organizers, innovators, and a group of speakers and mentors from Los Angeles to Washington, D.C., making stops in Austin, San Antonio, New Orleans and Atlanta.

Marzena Zukowska is currently on the train working on the launch of Opportunity Pipeline, a program that aims to create a more equitable and inclusive immigration system by connecting existing grassroots organizations with young social innovators.

Her commitment to the cause has grown out of Zukowska’s experience growing up as an undocumented Polish immigrant in America until the spring semester of her freshman year at Georgetown University. I checked in with Zukowska — who was somewhere in East Texas heading toward New Orleans — about her project and life riding the rails.

How did the idea for Opportunity Pipeline emerge?
It is directly attached to my experience growing up. It stems from the recognition that I am the expert in my own experience and my own story. For the last few years, particularly after getting my green card, I’ve strived to … gain a better understanding of the challenges facing immigrants living in the United States.

The seed of Opportunity Pipeline emerged about a year and a half ago. I’ve had the opportunity to work with some of the fantastic community organizers from the Not One More Deportation campaign. [I learned from them that] the only way to push a very honest, authentic and inclusive agenda is to recognize that the experts — the ones who are most deeply affected by the country’s immigration and economic policies — are the ones leading the movement.

Also, over the past few years of living in D.C., I’ve built up a strong network in the social innovation community. One of the most eye-opening things to me has been to see how few second-generation immigrants — particularly those from low- to middle-income backgrounds — were participating in this community and this conversation.

What are you hoping to accomplish while on the train?
Having time for reflection. I have a full-time job at Ashoka. De-cluttering and having space to think, and most importantly to think critically, is not something that I get often.

A big thing for me was meeting with people in these cities who could help me further my work. FWD.us was one that I’ve met with. Welcoming America is another one based in Atlanta. For some of my peers, this is their first moment of them putting themselves out there, just gathering the research to support their ideas. I feel like I’m in a little bit of a different place, really trying to launch an organization — trying to use the train journey to gather my resources and better connect myself through in-person conversations.

What has been an interaction that has been meaningful to you so far?
There are two big ones. One is [meeting with] Scott Paterson, a senior designer from IDEO. I’m a big fan of design thinking in general. I think it’s a powerful approach to problem-solving. Him being on this train, giving feedback to my peers and myself has really reaffirmed my belief in the power of that process.

Another person on the train is Kalimah Priforce, who runs Qeyno Labs. Even though our work is in different sectors, we have a very similar outlook to change. When I saw that he was on the train, I felt like I was really a fan — like my favorite artist was performing a concert. I was excited to ask him about his best practices, because he’s two or three steps ahead of me. That is sometimes the best type of mentorship, rather than with someone who is so far out of reach.

What cities were you most excited to visit, and why?
Definitely Los Angeles. L.A. is just a big hub, a very diverse city as far as immigrant populations. I was eager to be in touch with some of the organizations to better understand how inclusive they are in terms of outreach. From growing up in Chicago, I know that even though you might have pockets of different ethnic groups, that doesn’t necessarily mean that the groups are interacting with each other on a regular basis.

The second city is Atlanta. It’s the home of Welcoming America, which is making different strides to supporting immigrant communities by supporting the ecosystems in which they live. They take the spin on it by asking, ‘What does it take to make a city welcoming to immigrants as well as other residents?’

What has been the weirdest or most surprising thing about the train?
There are a lot of weird things, I have to be honest. There’s a lot that you don’t expect. You don’t expect to be tired all of the time. You have to push through it. It’s not as comfortable sleeping on a moving train as you might think. It’s not like being rocked to sleep like a baby. It’s feeling like you are about to fall out of your bunk bed.

The first couple of days, I felt like I had to pitch what I was doing and it didn’t necessarily feel like the safe space I was expecting it to be. However, by day two or three that completely shifted. You start getting to know everyone by name. You become a part of smaller reflection groups. There’s something inside of you that starts saying, ‘Wow. I really want to help these people in any way that I can.’