A Museum Designed for City Life Debuts – Next City 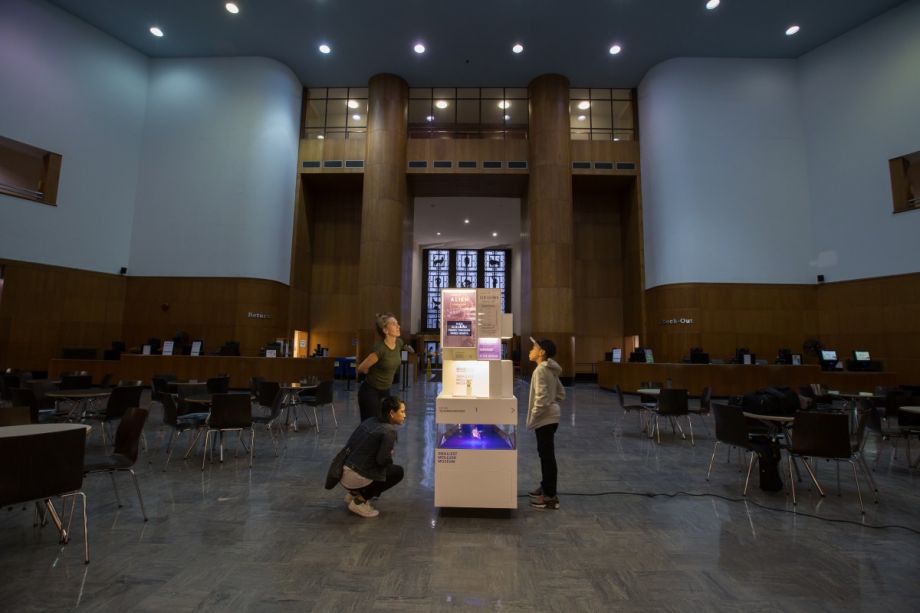 As are many great concepts, MICRO was born of a misunderstanding — or more specifically, a mishearing. One afternoon two years ago, Charles Philipp was describing his day’s plans to his partner, Amanda Schochet. The two had met while making large-scale art in the Nevada desert. “I’m going to the smallest museum,” he told her, referring to Mmuseumm in TriBeCa, Manhattan, but instead of “smallest,” she heard “mollusk.” “She’s really into mollusks and got super excited about it,” Philipp recalls. “So I wanted to take her to a mollusk museum, but when we looked into it, we realized there weren’t any.”

Their next step wasn’t one anyone saw coming. The pair decided to build a museum dedicated to the phylum of spineless sea creatures. But instead of trying to fit their vision for a place to learn about nautiluses, Quahog clams and the tens of thousands of other invertebrate wonders into a model already out there, they decided to think to think outside the box. In fact, they decided to create a museum that could fit inside a box: a six-foot-tall rusty shipping container, to be specific.

In November, the Smallest Mollusk Museum opened inside the Brooklyn Public Library’s central branch as the pair’s first project under MICRO, a nonprofit with a mission to “build science education for a culturally decentralized future” and create “museums that can go everywhere. MICRO’s vision is to bring museums to “where people already are” — places like hospitals, transit hubs and public buildings like the library. By meeting people in their daily travels through the city, MICRO aims to build a more accessible kind of museum, one where the barrier of entry is lower than those institutions of the past, one in which gives any passerby the opportunity to stop and learn. The model is something of a reversal. Instead of bringing the city to the museum, they are bringing the museum to the city. “People were looking for something they couldn’t get,” Philipp said. “We want to invert the way that cultural institutions work.”

A MUSEUM DESIGNED FOR THE PACE AND PATTERNS OF URBAN LIFE

For their first museum venue, the MICRO team was lucky to land on the central branch of the Brooklyn Public Library, a 352,000 square-foot building that counts 1.3 million visitors each year. A free and heavily trafficked building right next to Prospect Park and at the junction of some of the city’s most diverse neighborhoods, the library is in many ways a perfect testing ground for MICRO’s experiment in curation. One month into the Smallest Mollusk Museum’s exhibition, an estimated 25,000 people have already explored it. The exhibit is scheduled to be at the central branch until February, then will tour the other BPL branch locations.

The Mollusk Museum is a multimedia, interactive installation. Like its format, curation of the museum is (unsurprisingly) nontraditional with exhibits ranging from a 3-D printed octopus brain and a liter of slime — the amount a snail would require to cross over the nearly 2-kilometer-long Brooklyn Bridge — to various natural history exhibits, videos, sculptures, optical illusions and holograms. Outside of the physical space, engagement is encouraged with online components, including a digital book and soon-to-be-released audio tour voiced by Sean Rameswaran of WNYC’s Radiolab.

The eclectic assemblage is just as intentional as the museum’s location; Philipp and Schochet recruited a team of more than 20 scientists to offer the expertise and help shape the different parts of the installation.

What’s so exciting about MICRO’s new breed of museum to Ruby Murray, a science writer and award-winning novelist who oversees content for the nonprofit, is that they change the way people think about things that may seem mundane. While the average person may not be interested enough in, say, mollusks to seek out a museum dedicated to the slimy creatures, once they come across the installation, they can’t help but find themselves nursing a new fascination.

“The Smallest Mollusk Museum does that for snails, octopuses, clams,” she says. “What does it mean to live for hundreds of years, like a clam, or have your brain spread out across your body like an octopus?”

A SMALL MUSEUM WITH ROOM FOR ALL

Museums may be considered cultural monoliths, but because of admission fees, location and target audience, they are only monoliths for few. Across the country, 79 percent of people who visit museums identify as non-Hispanic white, according to a 2010 study by the American Alliance of Museums. While Manhattan and the Bronx have populations of a similar size, wealthy Manhattan hosts 85 museums, whereas the Bronx, where more than 50 percent of neighborhoods struggle with high levels of poverty, counts eight. And though many museums offer pay-what-you-wish for admission, museums are notorious for either concealing that information, often making it simpler to buy a $35 ticket than determining whether or not it’d be okay — or if you’d feel okay — to pay $5. That’s why MICRO wants to bring museums to where people already are.

Accessibility is at the core of MICRO’s mission but so is science. Part of their reasoning for the focus is need. Though 11 of the 20 most-visited museums in the US are science-related, institutions dedicated to art or other cultural offerings are easier to find in most cities. Out of its 135 museums, NYC only has five specializing in science-related themes. In San Francisco, three of the 53 museums are STEM-related. With these facts as inspiration, MICRO partnered with the Simons Foundation, Tribeca Film Institute, New Inc. and Newlab to make science education available to all. “If we can go to these underserved places, we can hit an entire part of the population whose needs aren’t met,” Philipp says. “We could really invigorate people to be more scientifically literate and therefore make more educated decisions about how to be an impactful citizen.”

MICRO builds museums that fit into the public spaces where people already are. (Photo credit: MICRO)

Because of its unique approach and mission, the MICRO team is made up of people from all different disciplines, all of whom are headed by Murray and Louisa Bukiet, a mechanical designer and engineer who oversees product. They also oversee designers, storytellers and engineers, all of whom seek to redesign how communities interact with cultural institutions. MICRO’s first two museums were designed by Labour, a design firm that’s worked with top New York City museums like the Museum of Modern Art and the Whitney.

While the Brooklyn Library saw the first installation of MICRO’s first concept, it won’t be the last Smallest Mollusk Museum, nor the last museum concept. In late December, they’ll be installing another Mollusk Museum in the Ronald McDonald House on Manhattan’s Upper East Side. The goal is to add a new museum series every six months, as well as move existing installations to other cities around the US.

Plans are in the works to bring the Smallest Mollusk Museum to the West Coast in 2018. In the meantime, MICRO is already at work on their next mini-museum series: the Perpetual Motion Museum. Though the team is still figuring out where those museums will be, they’re promised to have plenty of “whirligigs and doodads.” It won’t simply be informative, but also fun. “The museums bring people together in conversations around science, and the systems all around us,” Murray says. “That’s really exciting.”

Amanda Arnold is the weekend editor and politics contributor at New York Magazine's The Cut.