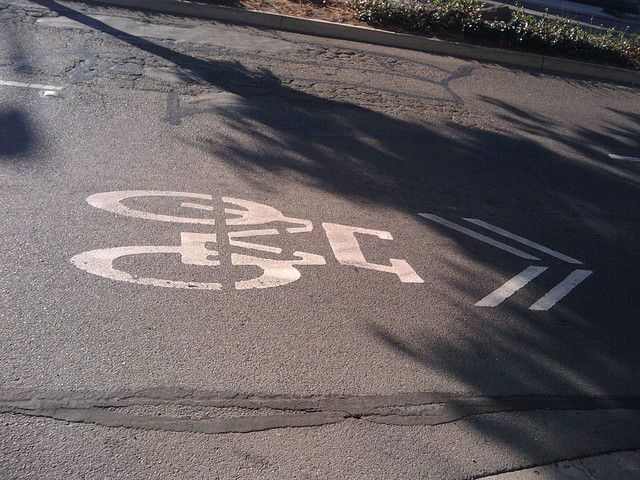 Like fungi after a spring rainfall, Miami has seen a rapid proliferation of these markings on her streets, designed to remind motorists to be aware of cyclists and their right to the lane. While the markings are a welcome improvement to our otherwise naked, auto-dominated streetscape, the sharrow boom is raising some concerns in Miami’s cycling community and beyond.

Has the sharrow obsession come at the expense of more substantial bicycling infrastructure?

Sam Ollinger at Bike San Diego argues that her city has fallen into this trap, using sharrows as copout to real change:

In the last year, San Diegans have seen the increasing number of shared-lane markings, also called “sharrows.” Sharrows are appearing everywhere: Adams Avenue, Park Boulevard, Broadway, El Cajon Boulevard, Grand Avenue, Voltaire Street, Chatsworth Boulevard, Hotel Circle South, Pacific Highway and more. However, these sharrows are being used as a cheap band-aid instead of implementing real change on our roadways that would increase the number of people riding their bicycle for transportation or recreation.

The same argument can be made for Miami. When I take a look at our current bicycle lanes, I cannot imagine a single one that required the removal of a vehicle travel lane or parking. It seems that Miami’s current bicycle lane striping — like on S. Miami Avenue in Brickell, NW 1st Avenue in Overtown, on Coral Way through the Roads, for example — was the “low-hanging fruit,” meaning that the existing pavement was wide enough to add bicycle lanes without a significant alteration of the existing street configuration, save perhaps narrowing the travel lanes a foot or two. It’s a commendable feat, but what needs to come next are the “hard miles” of lanes to achieve connectivity and encourage ridership. 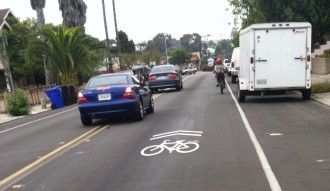 What are “hard miles”? New York City Department of Transportation Commissioner Janette Sadik-Khan used the term in a November article for the New York Times. Hard miles, Ms. Sadik-Khan puts it, are bicycle lanes in the densest, most contested parts of town to achieve connectivity with the lanes that were easier to complete. Many of the 280 miles of bicycle lanes NYC has built in the last four years have been of the “hard mile” variety.

Miami’s answer for the “hard miles” seems to be the cheap sharrow.

One of the loudest gripes with Miami’s current bicycle infrastructure is the lack of connectivity, where lanes seemingly begin and end at random, forming an incongruous network. It’s obvious that the sharrow seems to be the answer du jour. But how effective is this treatment and are they coming at the expense of better, safer facilities?

A recent study of the sharrows on Washington Avenue in Miami Beach showed that before sharrow implantation, 55 percent of bicycle riders were on the sidewalk. After the sharrows, that number reduced to 45 percent. Clearly, many riders still feel safer on the sidewalk, despite the painted bicycle in the middle of the road. The sharrows are probably doing very little, if anything, to encourage would-be riders to take to the streets.

From the Bike San Diego piece:

A recent report from the Mineta Transportation Institute, an institute that was established by Congress to research “multimodal surface transportation policy and management issues”, concluded that in order to attract a wide segment of the population, a bicycle network’s most fundamental attribute should be low-stress connectivity, that is, providing routes between people’s origins and destinations that do not require cyclists to use links that exceed their tolerance for traffic stress, and that do not involve an undue level of detour.

Conventional sharrows are not accomplishing the “low-stress connectivity” emphasized in the report. The infographic above is from a study in Portland, Ore. that found 60 percent of people surveyed were interested in cycling, but concerned for their safety. The “1% strong & fearless” and the “7% enthused & confident” are the ones most likely to appreciate the sharrow.

But what about the biggest chunk of prospective riders? To encourage more people on bikes, we need safe, dedicated infrastructure. And that almost always requires some sacrifice at the altar of the automobile.

In early 2012, I wrote a piece called “The Year in Bicycles” where I wondered if this would be the year Miami saw it’s first protected bicycle lane. As we approach the annual halfway mark, that question still remains unanswered.

The real question is, when will we see the “hard miles” of bicycle lanes in Miami to enhance and connect our network? Because conventional sharrows aren’t cutting it.